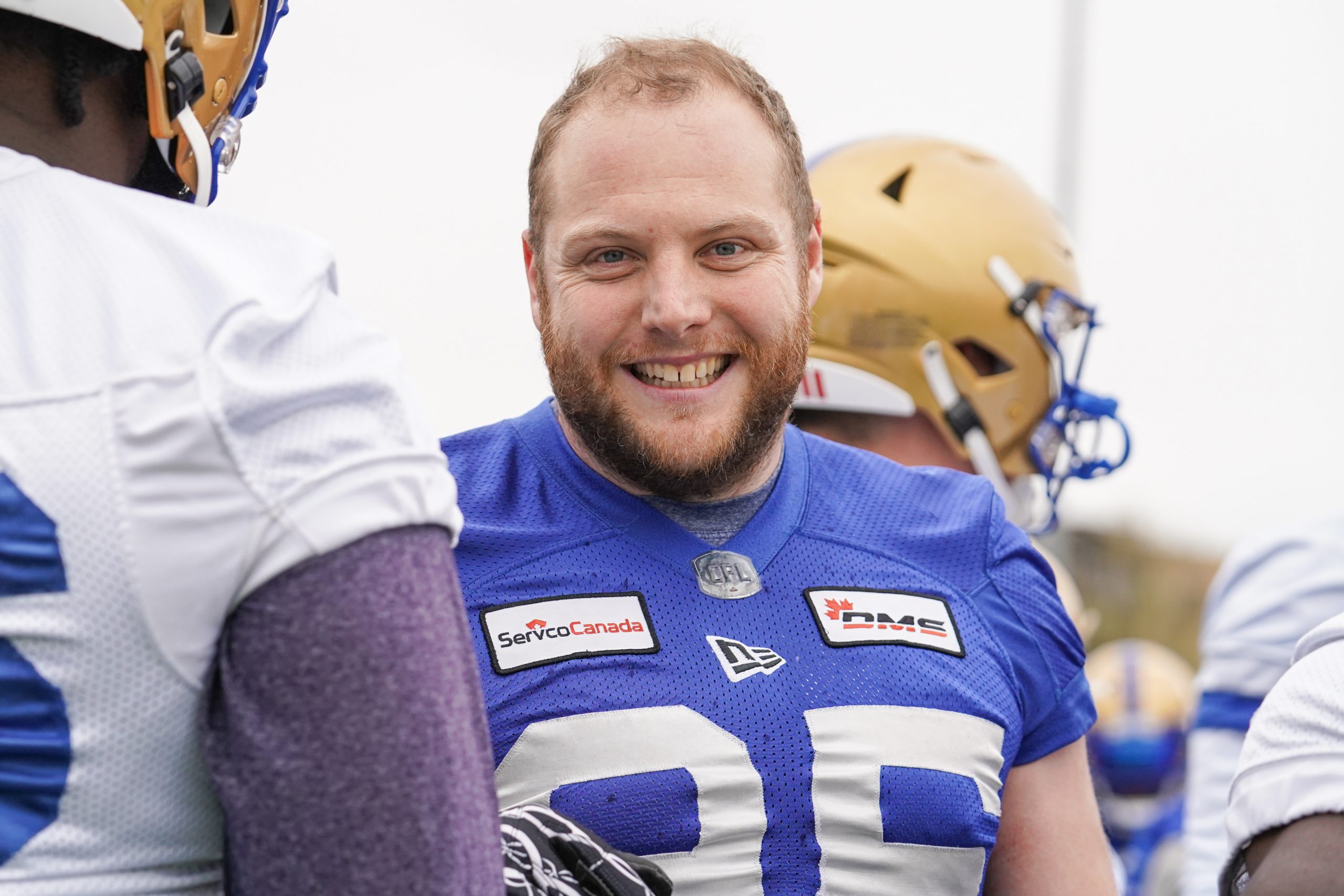 Two scenes from successive days at Winnipeg Blue Bombers training camp which help tell the story of a grizzled vet and the promising youngster who share the same position… It’s Saturday afternoon, well after the conclusion of practice, and defensive tackle Cam Lawson is still sweating and still out of breath after putting in an extra 15 minutes of intense work – all this after a gruelling four-hour session.

A day later there is Jake Thomas, also coated in sweat, detailing how even in the dog-eat-dog world of pro sports, he will fight for his starting gig all the while feeling an obligation to help the man who one day might ultimately replace him.

“I know what these guys are going through, and I just try to give them a hand and if they need anyone to talk to I let them know I’m here,” said Thomas, now 31 and heading into his 10th season with the Blue Bombers. “I had some great vets take me under their wing – Bryant Turner, Jason Vega – and they were really good to me in my first year, so I just try to return the favour.

“They put that into the organization a long time ago: you learn best by teaching. When we weren’t practising and still having meetings (last week) I said ‘Listen, I’ll give everything I can give you, if you beat me for my job that’s just a part of life. I’m going to try and make you the best football player and I expect you to try and make me the best football player.

“That’s where we’ve been really successful in this organization over the last few years – we’re always pushing for one goal and that’s to win Grey Cups.”

Blue Bomber fans are aware of how Thomas has morphed into a durable and reliable player over his 151 games in the CFL after first being drafted by the club in the fourth round in the 2012 CFL Draft. Interestingly, there are some similarities in Lawson, acquired by the Blue Bombers on draft day earlier this month in a deal with the Montreal Alouettes. There’s a hard-hat and lunch-pail, punch-the-clock approach both have taken – Thomas to a long career and two championships with the Blue Bombers, Lawson to the first chapters in what could be a promising future.

“Big guy. Hard worker. Has got all the tools to play inside,” said Blue Bombers head coach Mike O’Shea of Lawson. “He’s got the size, he’s strong, he’s quick enough and he’s got persistence. Just watching him he’s not only denting the pocket he keeps on moving up field and gets closer to the quarterback as the play goes along. What’s not to like? He seems to fit, too.”

The Blue Bombers had an interest in Lawson dating back to before the draft day deal with the Als. He was selected by Montreal in the second round, 16th overall, in 2020 – after the Blue Bombers had scouted him extensively that year and even called him during that draft to say they would grab him if he was still available.

“I already love it here. Love the culture. Love the players. It’s such a great group of guys and I’ve become immediate friends with them,” said Lawson. “Everyone here has each other’s back. There’s a camaraderie. You can feel it when a guy has your back and wants you to get better.

“I’m just trying to do my best so that I can possibly rotate in with Jake and the other guys. Jake’s a stand-up guy. And when we (Montreal) came out here he had an amazing game against us. I knew he was super strong. He’s like an old-fashioned player. I knew he was good before I got here and was excited to be working with him.”

And asked for his assessment of Lawson through just a few days of seeing him up close, Thomas offered this:

“He’s a good, young player and I think he’ll get good quick. You see this with linemen sometimes… once they get here they get a lot better with the more reps they have. The more game reps Cam has he’s going to really come into his own.

“He’s a confident kid and even when we were doing walk-through you can see him doing his mental reps, getting his 10,000 hours. I don’t know him well yet, but it really seems like he loves football and the people who love football are the guys who put in the work. He’s already fit into the room well. He’s a welcomed addition to the D-line room and the D-tackles.

“We have a good group here with Casey (Sayles) and Rick (Walker) and the new guys like Cole (Adamson), who is going to be going back to school but to get him in here for all of training camp and he’ll have some tips back and hopefully he’ll have a big year (with the Manitoba Bisons). Kenny Randall’s been good, too.”

Thomas said after re-signing with the club this winter that if the club had struggled to a 4-10 record in 2021 and missed the playoffs he might be thinking more about his career outside of football as a real estate agent in Fredericton, N.B. Yet winning championships can help keep a man energized.

“Every time you win those Grey Cups those are moments you can’t get back,” he said. “And when the core comes back and you have another chance to get there, that’s what pushes me. And I still love the game. As long as I still have that fire to play, and my body is holding up until they tell me to go home I’m going to keep playing.

“I still feel young,” he added with a sly grin, “but I saw a couple birthdays the other day and I think I saw a ’99, a ’98… it will be pretty weird when that first 2000 (birthdate) comes. It’s definitely different. I remember my first training camp was actually at the old stadium, just to date how old I am.”