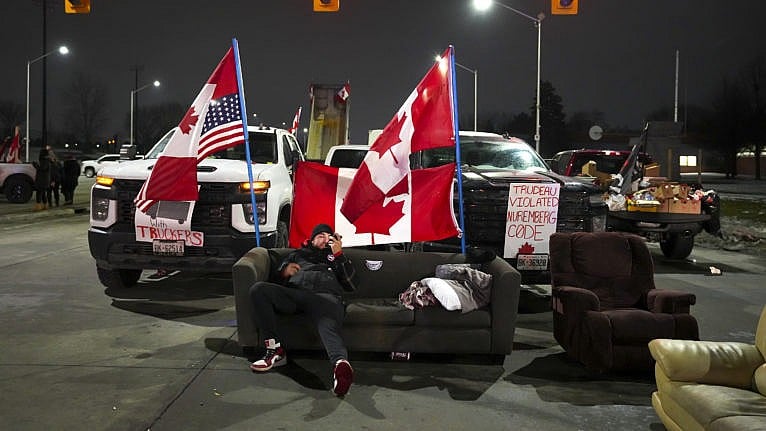 Too dangerous: The mayor and police chief of Windsor said Wednesday that they are unable to clear a blockade on the bridge to Detroit because of fears of violence, the Globe reports.

On day three of the blockade, Drew Dilkens, mayor of Windsor, Ont., said arresting the demonstrators opposed to pandemic health measures and towing their vehicles could lead to violence, because some have said they are “willing to die for it.” So instead, police are trying to negotiate an end to the blockade. The Ambassador Bridge connects Detroit and Windsor and carries about one-quarter of Canada’s trade with the United States – about $450-million in goods between the countries. Commercial traffic is being diverted to the Blue Water Bridge in Sarnia, Ont., where the wait to cross to the U.S. on Wednesday was almost five hours.

The blockade is already leading to slowdowns at Ontario factories.

Brian Kingston, head of the Canadian Vehicle Manufacturers’ Association, said Ford Motor Co., General Motors Co. and Stellantis NV, have all cut production. “This can’t be allowed to persist. The blockades need to be removed,” Mr. Kingston said. Mark Sciberras, a Unifor union leader at Ford’s Oakville assembly plant, said employees’ shifts have been cut in half because of the parts shortage. Bank of Canada Governor Tiff Macklem warned at a Wednesday press conference that if the blockades last much longer they could “start to have a measurable impact on economic activity.”

Enough: One actual trucker, who had a five-hour detour because of the blockade, told a City TV reporter the protesters should stop.

Bad for business: The disruption at the Detroit-Windsor crossing, which handles more than a quarter of the roughly $775 billion in cross-border goods trade, is alarming the business community, CP reports.

A group of 70 trade organizations including the Canadian Chamber of Commerce has called for a “swift and immediate clearing” of the blockade, citing the need for a steady supply of food, medical products and industrial parts. The delays could result in higher food prices and more spoilage, due to longer, costlier routes as trucks are diverted, allowing produce less time on shelves before getting too ripe. “Already we are seeing delays in product of 12 to 24 hours in deliveries,” said Gary Sands, a spokesperson at the Canadian Federation of Independent Grocers.

Ford, Trudeau talk: In a sign that governments might be preparing to act, late Wednesday night Justin Trudeau tweeted that he and Doug Ford had discussed the matter.

Settling in: Protesters blocking an Alberta border crossing greeted Mounties with cries of “Hell no, we won’t go” on Wednesday, vowing to stay put, CP reports.

The Alberta government announced Tuesday that it was scrapping its COVID-19 vaccine passport requirement starting Wednesday. Other public health measures, including a mask mandate, are to be lifted March 1. For many of the protesters, it wasn’t enough. “We’re here for the big picture. It started with the border thing. It started with (Prime Minister Justin) Trudeau, and until Trudeau moves, we don’t move,” said John Vanreeuwyk, a feedlot operator from Coaldale, Alta.

No action: CBC quotes Bill Blair, Omar Alghabra and Marco Mendicino, who all say that the situation is grave, but for the moment they are not signalling action, CBC reports, leaving it to the police to sort out.

Warning: Ottawa police, now presiding over Day 13 of disruption, issued a warning to the protesters who are still dug in in the capital on Wednesday, Global reports.

“The unlawful act of blocking streets in the downtown core is resulting in people being denied the lawful use, enjoyment and operation of their property,” read a statement from the Ottawa Police, issued on Wednesday. “We are providing you notice that anyone blocking streets or assisting others in the block of streets may be committing a criminal offence. You must immediately cease further unlawful activity or you may face charges.”

Hard men: Matt Gurney, writing for the Line, has been wandering around the protest site and talking to people with insight into the security challenge, and he concludes that Ottawa Police Chief Peter Sloly, who has been frequently blamed by frustrated residents, has been telling us something serious—there are some dangerous people in Ottawa.

Some of them are ideologues, others just grifters, but they’re real, and they’re in Ottawa. Maybe not in that parking lot. I certainly didn’t get the chance to take any names. But local officials know they’re out and about, and are worried that any move they make will trigger an incident that can easily result in dead cops, dead truckers and delighted far-right agitators.

Safe for kids? Truckers and supporters told the Citizen Wednesday they are proud to have their children with them at the protests.

“Our kids are living better than most kids. They call it glamping,” said Marc Kozlowski, who drove from Vernon, B.C., with his wife Danielle and their three children Ariana, 8, Emerson, 7, and Braylin, 2. The self-employed couple runs wine tours in the Okanagan Valley, a business that has been severely affected by COVID-19 lockdowns. The family has been living in their Ford Expedition SUV while in Ottawa, but has been invited to homes to shower and do laundry. Kozlowski says he has no worries or safety concerns about his children.

Errant trucks: CBC reports that some companies are finding out to their surprise that trucks they own are being used in the protest.

Less trusting: Canadians are losing trust in their leaders and institutions as the pandemic drags on, CP reports. “When we have 46 per cent of Canadians saying they still feel anxiety and stress, it’s taking a toll on trust in Canada,” said Bruce MacLellan, CEO of Proof Strategies, which carried out the survey.

Critical MPs: Even government MPs seem to have less trust in the government. Quebec Liberal MP Yves Robillard told the Hill Times that he agrees with Joël Lightbound, the Quebec City MP who on Tuesday criticized his government for playing politics in its handling of the pandemic.

Voix de la raison: Quebec commentators cheered Lightbound on Wednesday, for having the gumption to speak truth to power. Journal de Montréal columnist Richard Martineau praised him as a voice of reason (translation).

This is what was missing from this movement which, as the polls show, is snowballing in the country. A spokesperson who is neither a conspirator nor a Trumpist. Who respects the expertise of scientists. Who recognizes the dangerousness of the virus. Who does not ask for the immediate lifting of all the restrictions. Who does not cry out for dictatorship or tyranny as soon as the government introduces a measure. And who doesn’t hand his microphone to the first oddball just to increase his ratings and prove to his listeners that he still and always remains a “rebel” despite his grey hair. In short, a calm and responsible personality, who is able to make sense of things and does not criticize the government for the simple pleasure of criticizing it.