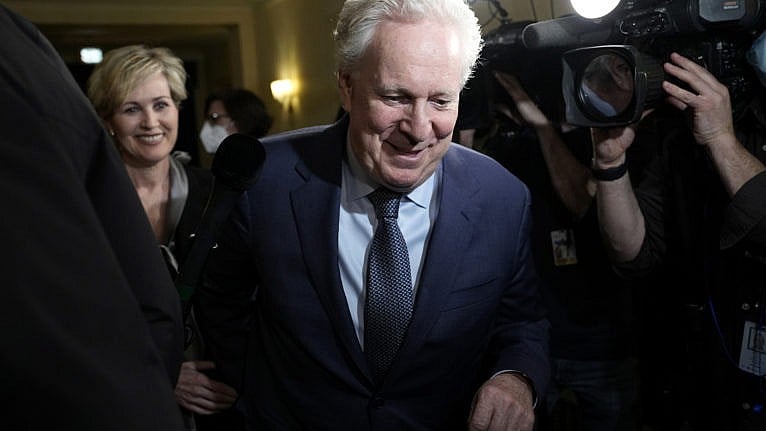 Paul Wells: Nothing worse can happen to Jean Charest than has already happened to him, many times. The real danger is the looming fight between him and Pierre Poilievre.

In a world whose horizons have shrunk to the length of a TikTok video, Jean Charest’s career is still measured in decades.

His Parti Libéral du Québec—sorry, that’s what it said on the buses—lost the 2012 election in one of the softest landings a defeated party ever managed, only 33,000 votes and four seats behind the Parti Québécois. In the decade since he’s been a fixer, helper and deal-maker with what his law firm calls “a network of global relationships.” On Thursday in Calgary, of all places, he’ll announce his candidacy for the leadership of the Conservative Party. Of Canada. His main rival mistrusts networks and globes. This should be fun.

Charest’s 2012 defeat capped almost a decade as premier of Quebec, a province not conspicuously preoccupied with the concerns of Calgarians. That decade will be the object of much debate from here to September. For now I’ll say only that personally I date the beginning of Montreal’s economic comeback from about 2003, but that it wasn’t always lovely.

The decade before Charest’s 2003 election win was the hardest in his career: he was forever in the spotlight but consistently outside the circles where real power is exercised. In 1993 the Progressive Conservative party he didn’t yet even lead lost an election as badly as it’s possible to lose, falling from 156 seats to two. Charest’s curse, that year at least, was to be one of the two. He battled back, played a prominent role in the 1995 Quebec secession referendum, led the PCs to a slightly better result in 1997, and was bundled off to lead the Quebec Liberals in 1998, pretty much against his will. We’re talking fingernail scratch marks down the length of the 417. There will naturally be debate this year about whether a longtime provincial Liberal can be a federal Conservative. In 1998 the questions ran all the other way.

The decade before 1993 was our man’s political bildungsroman. Charest rode to Ottawa as a 26-year-old on the Mulroney wave of 1984, talked his way into cabinet, talked his way back out, then finally back in. Sturdy general training in promise, regret and redemption.

What can we learn from this reverse decade-at-a-time biography? Maybe this: Nothing worse can happen to John James “Jean” Charest than has already happened, many times. He’s lost big and small, he’s chosen badly and got caught, he’s had to swallow himself whole and apparently developed a taste for it. I never thought he’d get back into politics. The best explanation for it is that politics never got out of him.

Surely he’s a long shot. Right at the top of my list of people least likely to win a federal Conservative leadership, it says “Liberals.” Second on the list is “Progressive Conservatives.” Charest’s long record of success won’t persuade many. A lot of it wasn’t success, and much of the success was won in precincts today’s Conservatives would rather avoid. He is catnip mostly to people who feel increasingly estranged from the modern Conservative Party. Here’s Mike Coates helping lead Charest’s campaign. Here’s Coates losing a riding nomination battle to Cheryl Gallant. “I sent Jean a note the other day,” a senator told me. “I said, ‘Your country needs you but your party doesn’t deserve you.’” Senators who crack wise may not represent a sturdy base of support in the party.

Charest and Poilievre will ask Conservatives two different questions. Charest’s is: Are you tired of losing yet? Poilievre’s is: Are you tired of leaders who will say anything to win, and then don’t even win? Just about everyone I know who thinks Conservatism has gone downhill since Joe Clark retired is rooting for Charest. The ones who wish Andrew Scheer and Erin O’Toole hadn’t bothered to pretend that they cared about climate change are with Poilievre. I feel comfortable saying that among current Conservative members, the we-miss-Joe crowd are outnumbered by the climate-change-is-Davos-socialism crowd.

The confrontation between the two men is a moment of considerable danger for a party that did not exist, in its current form, before 2003. Its only winning leader was Stephen Harper. Harper worked hard, for little credit, to ensure Progressive Conservatives like Peter MacKay and Lawrence Cannon could feel reasonably comfortable in his party. The basis of Poilievre’s appeal is that he doesn’t work hard to make anyone feel comfortable. Progressive Conservatives will be sensitive to insult. And wondering whether they need to put up with it. A party so recently put together isn’t sure of staying together.