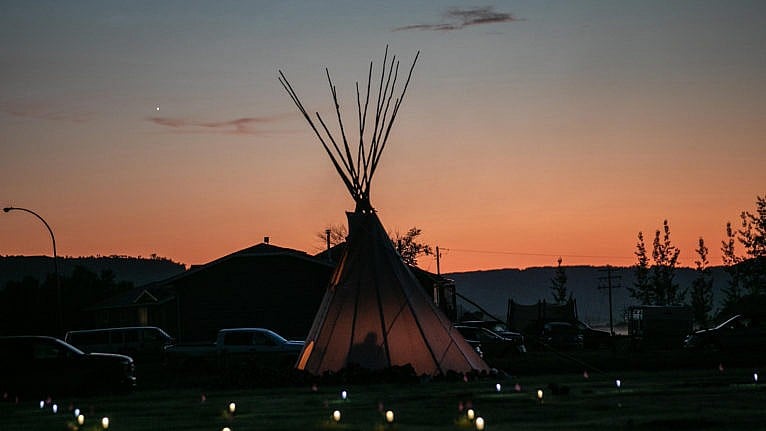 The residential school children who rest in unmarked graves are lost to their communities. But the shared knowledge of their fates has its own compelling power. That is why they top our 2022 Power List.

In Secwepemctsín, the language of the Secwépemc, they’re called le estcwéý. The missing. The ones taken to residential school who never returned. Survivors of Kamloops Indian Residential School in B.C. spoke of them, as did Elders across Canada who were forced into the notorious facilities. An entire volume of the Truth and Reconciliation Commission (TRC) report focused on them.

Then came late May and the announcement by Tk’emlúps te Secwépemc that some 200 presumed graves of le estcwéý had been found on the grounds of the Kamloops residential school. Waves of revulsion and guilt washed across the country. Through decades of testimony of abuse—through the federal reports, legal settlements, formal apologies and a years-long public hashing-out of this national disgrace in the TRC—there had been periodic outpourings of disgust and grief. But this shock was deeper, as non-Indigenous people and First Nations, Métis and Inuit alike thought of children’s lives being cut short while they attended these harsh, chronically underfunded and assimilation-focused boarding schools, and of hundreds being buried in something unthinkable in the non-Indigenous world: a school cemetery.

Flags went to half-staff and stayed there for half the year. Canadians brought shoes and toys to makeshift memorials at city halls coast to coast. As weeks passed, the grief layered on: there were similar revelations from Cowessess First Nation in Saskatchewan (751 unmarked graves, in an area known to be the resting place of both students and local residents), Lower Kootenay Band in B.C. (182 suspected graves), Penelakut Tribe in B.C. (160) and Williams Lake First Nation in B.C. (93). The TRC and other experts had pegged the total figure in the thousands, and here was tangible evidence, puncturing long-standing denials that Canada’s policy toward Indigenous people had been genocidal.

To say the least, the news dampened normal jubilation around Canada Day and gave further solemnity to the first National Day for Truth and Reconciliation (for those among us not titled Right Honourable, at least). Politicians felt compelled to do something, finally tackling some of the TRC’s calls to action, pledging the release of long-suppressed documents related to residential schools and committing millions to help other First Nations do what many communities call “ground truthing” at school sites. When Ottawa finally reached a settlement to redress discrimination in Indigenous child welfare, Cindy Blackstock of the Caring Society credited public pressure arising from the gravesite discoveries.

The announcements even stirred one of the planet’s most intractable institutions—the Vatican. Pope Francis will meet this year in Vatican City with Canadian Indigenous leaders and has accepted an invitation to come here. He might finally deliver a long-demanded apology for the church’s role in the residential school catastrophe.

Sen. Mary Jane McCallum, the upper chamber’s lone residential school survivor, says the graves could become a catalyst for “conciliation,” a term she uses in place of “reconciliation” because she sees no previously good relationship between Indigenous people and the rest of Canada to renew. “These young spirits have been waiting for years to be found. They were crying out for this country to change,” the Manitoba senator tells Maclean’s. “I’ve had so many people write to me—individuals—and some of them say, ‘I will now teach my children about residential school. I will now make an effort to do better.’ ”

McCallum wonders why it often takes horrendous discoveries to change Canadians’ outlook, when much of the trauma and atrocity was known. It’s a repeating pattern. Though the mass flight from Syria had been well-documented for several years, there had been little action in this country before heart-wrenching photos emerged of three-year-old Alan Kurdi’s body on a Turkish beach. It spurred Canadian leaders to hurriedly bring in tens of thousands of Syrian refugees.

In the case of le estcwéý, there was no galvanizing photo, no image of a child, no name, no birth or death date. There was, instead, the mere imagined presence, and loss, of all these children. Several classrooms’ worth of them in Kamloops alone, their lives ended prematurely by disease, violence and indifference. Standing in for the unknown children’s in-memoriam pictures were archival church photos. Or vigils of small shoes. Or 751 orange flags in a field at Cowessess First Nation.

Eva Jewell, a sociologist and research director with the Toronto-based Yellowhead Institute, has co-written annual reports tracking progress on the TRC’s 94 calls to action. In 2020, the report found, three were completed, more than in the prior three years combined. And they all came in June, within weeks of the finding at Tk’emlúps. But they were all calls for symbolic action, Jewell points out: the TRC’s demands for a national commemoration day, an Indigenous languages commissioner and changes to the citizenship oath.

Other symbolic gestures abound. Flags down? Symbol. Meeting with the pope? Symbol. Meanwhile, boil-water advisories remain on several reserves. Deep-rooted inequality lingers in education, health and housing. Calls to action “that would change the lives of Indigenous people, and children who are still mired in a colonial system of inequity and oppression—those have yet to be completed,” says Jewell, an associate professor at the university that will soon no longer be named Ryerson, after its board last summer voted to scrap a name associated with the establishment of residential schools. “Hard work on the symbols, Canadians, with your orange shirts and your day off. We’re still on a boil-water advisory.”

Jewell acknowledges, though, that many of these symbolic measures were sought by survivors and others, as part of what’s widely understood to be a long road to reconciliation. Symbolic action, along with what polls indicate is a greater desire to walk that path, could lead to something more significant, she says.

Close to her own home in southwestern Ontario, the Chippewas of the Thames First Nation, is the former site of Canada’s second residential school, Mount Elgin. Jewell grew up on its grounds, and the presence of graves was widely understood. “There are parts in the community that people just don’t build on,” she says. Now, the findings in Tk’emlúps and elsewhere have prompted government and corporations to fund the ground-penetrating radar to detect how many graves there might be on these lands. Similar efforts are unfolding at an unprecedented pace on First Nations, Métis and Inuit communities throughout Canada.

This intensified search could reveal the resting places of hundreds or thousands more Indigenous youngsters. If this, to Canada’s discredit, is what it takes to address historical atrocity, the legacy of these children will grow. Once the epitome of powerlessness, in a society deafened to their plight by prejudice, they and their silent cries for justice are finally being heard.

A National Indian Residential School Crisis Line has been set up to provide support to former students. This 24-hour crisis line can be accessed at 1-866-925-4419.