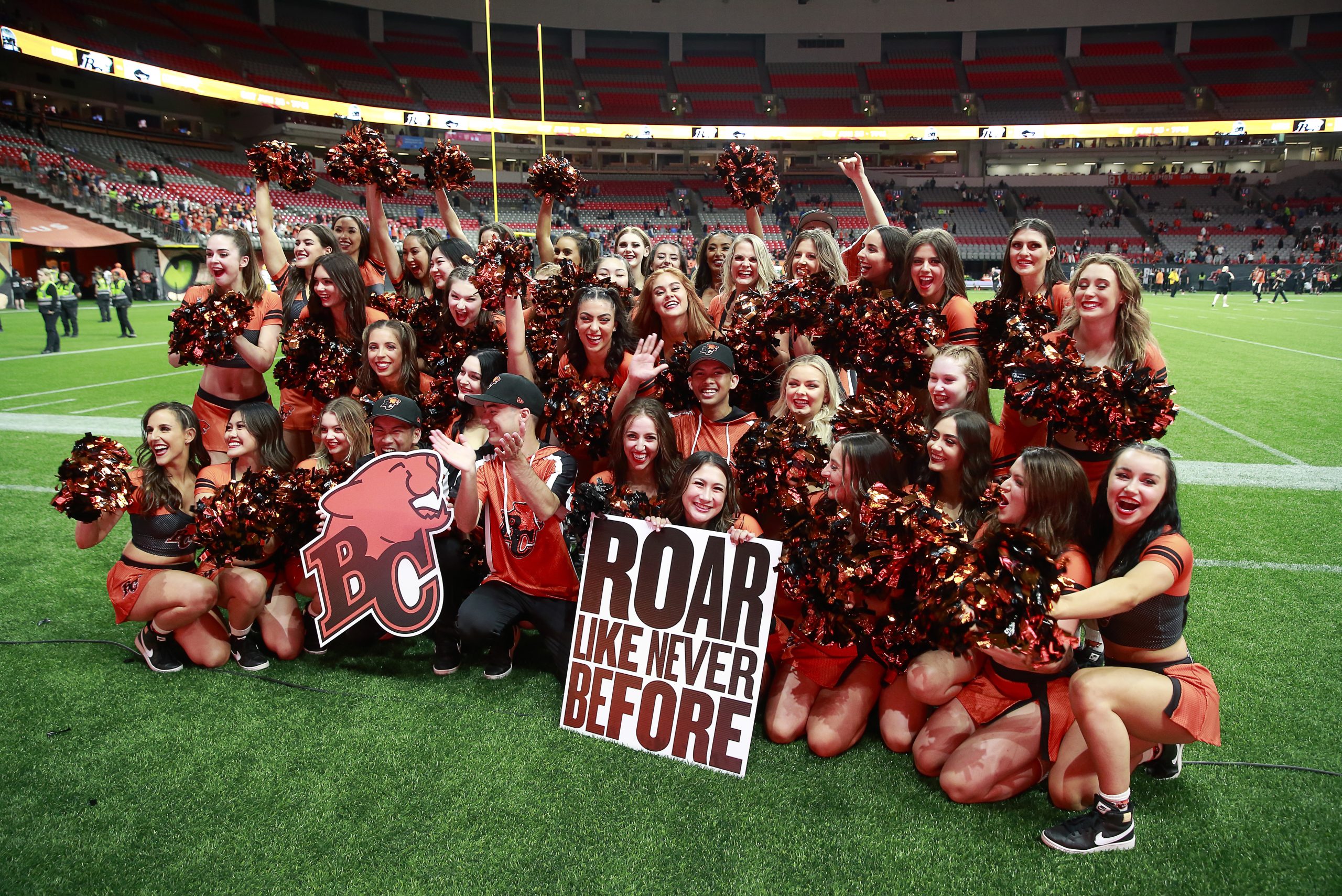 Try not to leave once the game is about to kick off this Saturday because the Uproar Dance Team will bring an extra flare to the crowd while the Lions will ensure the Elks play another challenging game in Week 9.

Over the past two weeks, the 2022 dance team has been prepping for Legends Night, in junction with multiple dance team alumnae from the previous seasons. Together, dance team members from previous seasons and eras are set to hype everyone off their seats with their halftime performance.

From the audition to prepping for the best gameday experience. The Uproar Dance Team has helped dictate the crowd noise from start to finish. This year, the dance team is shifting to a different approach with the addition of male dancer team members — bringing a different dynamic to the BC Lions dance team.

The Lions have reached out to three dance team alumnae, where they looked back on some of their favourite moments as a Lions’ dance team member and the experience that opened further opportunities in their life.

It was a remarkable season for the BC Lions in 1994. Not only did the team bring home the Grey Cup on home soil, but it was also the first Grey Cup game featuring a Canadian and American team in the CFL. Although the Baltimore Stallions put up a fight against the Lions, it was the legendary Lui Passaglia who sealed the deal with the game-winning field goal for the Lions’ third Grey Cup win (26-23) over the Stallions.

“It was a very fun game to be at. Full crowd, great energy, Lou lined it up to win. It was a lot of fun,” Heidi recalled.

Originally from Chilliwack, Heidi made the Lions’ Pride Dance Team in 1994, where the team used to practice at Club On Top on Alberni and Thurlow Streets three times a week. Those weekly rituals with the dance team would eventually become nostalgic memories. From commuting to practices to promotional work and juggling between work and dance, it led to more opportunities for Heidi to dance professionally.

Although the dance performance industry is niche and can be challenging to pursue as a career, the Lions dance team has opened other doors for the alumnae.

After the 96’ season, Heidi and several dance team members formed their own attendant group, where they performed at different events.

“We did some events for a year and then we got hired onto a touring production. It was a bit of a scary decision, but I was able to tour around the world and perform. I was happy to dance professionally for nine years and eventually became a co-producer of the show. It was a lot of fun. I toured Asia and the U.S. for about two years,” she recalled.

The last few weeks of rehearsing for the upcoming game on Saturday, also allowed Heidi to reconnect with former dance team members from different seasons and a chance to team up with the current Lions’ dancers after some years of working abroad.

“I love this current team. I didn’t live in Canada for a good time. I wasn’t following the Lions as much. I did see the way they format, and choreography, presenting the team with a thicker approach uniform-wise. I’m just grateful to be able to share the field with them. To be honest, I wish I could do the whole season,” Heidi said.

Grace recalls her first season with the Lions’ Pride Dance Team back in 1997 like it was yesterday. Being a cheerleader throughout high school, Grace and her friends had always admired the Lions dancers when they went to the games. One day, she saw an advertisement in The Province newspaper where the Lions were hosting an audition, this was her chance to make her dream come true.

“On the day of the tryout, I picked up my friend from the cheerleading team in high school, she totally chickened out. I show up there were like 200 girls lined up around the block, it was very intimidating because I haven’t done any cheerleading or dancing since high school, so two years at this point I was out of school,” Grace recalled.

While other contestants were doing splints up the wall, Grace had the ‘do your best’ mindset.

Grace was on the Lions’ Pride Dance Team in 1997 and 1998, but an injury held her back from competing in the 1998 season. Despite not being able to finish her second year, the camaraderie with the dance team carries on. Grace, who now resides in Huntington Beach, California, came back in 2014 to participate in the alumni game halftime performance.

Grace was born in Manila, Philippines and grew up in Vancouver. While she didn’t have any sisters growing up, she ended up discovering 25 other sisters on the dance team.

“There were 26 of us, I love the sisterhood. My favourite part is on gameday before we come out of the tunnel and once you step on that field, there’s no feeling like it. It’s indescribable,” she said.

Since 1998, life has taken over where Grace worked in a corporate job, became a mother and is now an entrepreneur in consumer behaviour and employment branding. Dancing might have been left out over the years, but Grace is excited to share the dance floor with the Uproar Dance Team.

“They’re very forgiving to us. It’s very humbling to see their halftime routine. Everybody has a different style on how they project the dance, but they also move cohesively as a team,” Grace on the 2022 Uproar Dance Team.

“We’ve been rehearsing for a few weeks now. I think it’s really coming together. It’s great with the alumni because we all have different dances in different seasons. For myself, it was great to meet alumni from 1993 or 1994 again, they were very aspirational to us because I looked up to them and have only seen them on posters. It’s great to be able to share the dance floor with everyone.”

Being on the Lions dance team was Tracy’s first opportunity to dance professionally. Prior to earning her spot on the Felions in 2017, Tracy heard about the dance audition through a friend as well, where she and other dancers went through three rounds of tests.

“The first part was a very simple floor work then the second part was something similar with a little bit of choreography. The third part was a full-minute dance. I remember at the time, Virgin Radio was a part of it as well. So, it was really fun because everyone was very uplifting and very supportive of one another. It was a great environment to be a part of,” Tracy recalled.

To be able to run out of the tunnel with the dance team and set the tone for the entire stadium was one of Tracy’s most memorable gameday experiences. Each home game, the Lions dance team are diligently pumping up the crowd whether with the pre-game routine or even by drawing the crowd back into the game.

“Because we’re essentially the first part of that BC Lions experience, we’re the first ones to get out there to really hype up the crowd before the players enter. Everyone’s excited. The fact you’re right out there in the middle of the field and everyone’s energy, you just don’t get that anywhere else,” she said.

While dancing has been a significant part of Tracy’s life, the Felions dance team helped her gain more confidence. As a Lions dance team member, Tracy was challenged to learn a different style of dance with more elaborate moves. The constant repetitions have paid off and being in the same room with dancers with a common goal, was the unwritten reminder that they were dancing for each other.

“I really miss the big group of people that you’re with. That team effort, because you’re dancing for each other, you’re making sure everyone is grooving together. I really miss the bonding with the girls,” she said.

With the addition of the male dancers in 2022, Tracy added that it brings a different dynamic to the dance team.

“It speaks to the inclusivity aspect. That fact that you don’t have to be a female to be on the dance team. Especially with football, dance has been very female-oriented. Having that variety of mix of males and females showcases that cheerleading or a dance team can be gender neutral.”

When the Uproar Dance Team and the alumnae take the field on Saturday, Tracy described it’ll be a lively halftime performance people won’t forget.

“It’s a big deal. It’s a once-in-a-lifetime experience. You have now 40 people on the current team and a group of alumnae joining. People can expect a very energetic group of dancers that’s ready to showcase everything of what we got.”