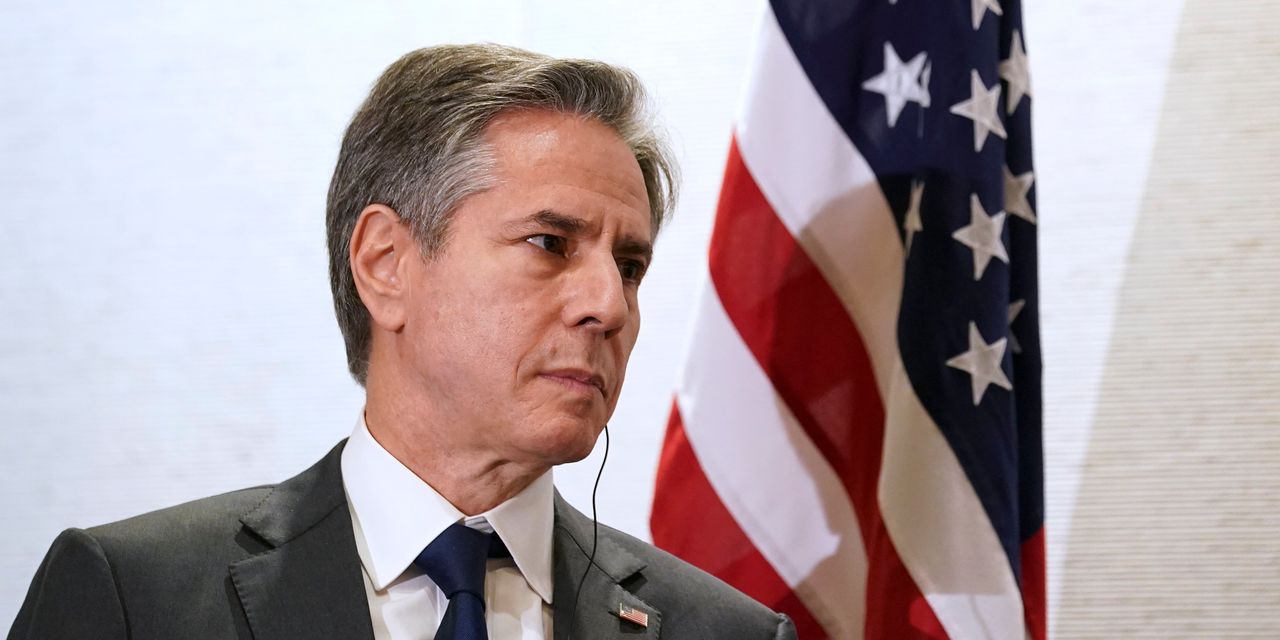 MELBOURNE, Australia—The U.S. warned that Russian aggression against Ukraine risked spreading instability to the Indo-Pacific if it wasn’t opposed and deepened ties to three allies that aim to counter threats to the region, including from China.

speaking alongside the foreign ministers of Australia, India and Japan, told reporters that the Ukraine crisis is a challenge to the basic principles that have upheld global prosperity and stability since World War II, saying countries shouldn’t be allowed to unilaterally change borders, dictate choices to their neighbors or exert a sphere of influence.

“If we allow those principles to be challenged with impunity, even if it’s half a world away in Europe, that will have an impact here as well,” Mr. Blinken said Friday on a visit to Melbourne for a meeting with his counterparts from what is known as the Quad. “Others are watching; others are looking to all of us to see how we respond.”

The officials emphasized that the grouping exists to assert shared values and find avenues for cooperation, rather than to counter any one country, but they described threats to the prevailing regional and international order.

“Our region is in a period of rising strategic uncertainty,” Australian Foreign Minister

said following the meeting. “The rules and norms that have provided a foundation for our stability and, hence, our prosperity are under pressure, in particular, from authoritarian regimes.”

“This is indeed the moment when the power of diplomacy is tested,” Japanese Foreign Minister

The Biden administration has sought to elevate the Quad, an informal grouping of the U.S., Australia, India and Japan, to promote the benefits of democracy, coordinate on economic and security issues, and counter China’s increased military activity in the Indo-Pacific. In September, President Biden hosted his Quad counterparts in Washington, and Japan has agreed to host the second in-person Quad leaders’ summit during the first half of 2022.

Earlier, when asked whether a confrontation with China in the Indo-Pacific region was inevitable, Mr. Blinken said that “nothing is inevitable” but that the Quad members “share concerns that in recent years China has been acting more repressively at home and more aggressively in the region and, indeed, potentially beyond.”

Mr. Blinken said his presence in the region amid the crisis in Europe demonstrates the importance of the Indo-Pacific and underscores Washington’s commitment to the region, which he said would shape the trajectory of the 21st century.

The State Department on Thursday warned Americans in Ukraine to depart the country because of the heightened risk of Russian military action.

Russia has roughly 100,000 troops positioned near Ukraine, plus additional forces conducting exercises in Belarus and deployed to the Black Sea. U.S. officials estimate that Russian President

has 70% of the forces he needs in place to mount a full-scale invasion.

“We’re in a window when an invasion could begin at any time, and to be clear, that includes during the Olympics,” Mr. Blinken said. He said the U.S. would continue reducing the footprint of its embassy in Kyiv, from which families of diplomats were ordered to depart in January.

The Biden administration is preparing to unveil its overarching strategy for the Indo-Pacific, as well as an economic framework outlining plans to increase cooperation with friendly countries as China steps up its economic engagement and seeks membership in regional trade pacts.

Foreign-policy experts expected the Quad discussions to be watched particularly closely given that the meeting comes shortly after Mr. Putin and Chinese leader

met in Beijing and formed a pact aimed at countering the U.S. and its allies.

In a joint statement, Russia and China “set out a coherent, alternative view of the world from the one we’ve been articulating in the West,” said Allan Gyngell, national president of the Australian Institute of International Affairs and a former Australian diplomat. The Quad meeting will “be seen in some ways as a response to that.”

Although Mr. Blinken didn’t directly address the new pact between China and Russia, Ms. Payne, Australia’s foreign minister, said she is worried about the closer ties. China is an important trading partner for Australia, but relations between the two countries have worsened in recent years.

“It is concerning because it doesn’t present or represent a global order that squares with those ambitions for freedom and openness and sovereignty and the protection of territorial integrity,” she said of the pact.

Write to Courtney McBride at courtney.mcbride@wsj.com and Mike Cherney at mike.cherney@wsj.com