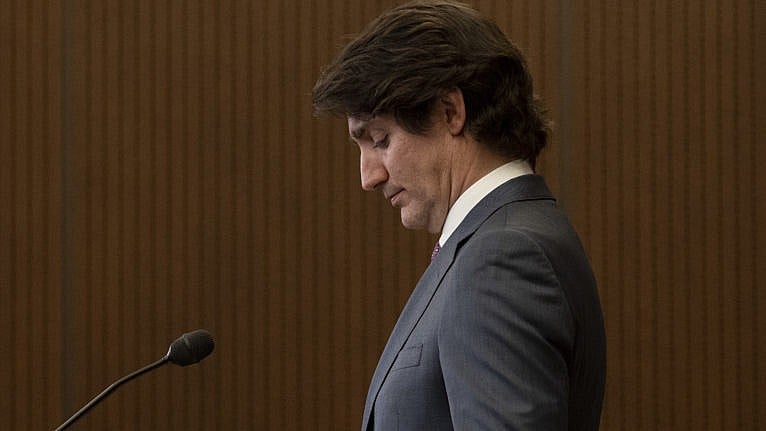 Paul Wells: Five PMs have had the Emergencies Act and declined to use it. The question now is whether Trudeau has met the ‘stringent test’ laid out 34 years ago.

“The War Measures Act is too broad and too sweeping,” Perrin Beatty told the House of Commons when he launched debate at second reading on Bill C-77, a proposed new Emergencies Act, in November of 1987.

Beatty was the Minister of National Defence in Brian Mulroney’s government in those days. He said the War Measures Act, used in sweeping ways to keep some kind of makeshift lid on the country’s civil peace during two world wars and then again, awkwardly, to quell a Quebec separatist fringe in 1970, “makes no provision for dealing either moderately with peacetime disasters or for a measured and prudent response to international tension.” Beatty quoted John Turner, who’d been the Justice Minister in 1970, calling the old act “too blunt an instrument.” One of Beatty’s colleagues, Jean Charest, quoted an earthier assessment from Jean Chrétien: the War Measures Act was a moving van, and in 1970 all the feds needed to move was a bicycle.

The new law would be less sweeping in its effect—in particular it would not suspend the Charter of Rights and Freedoms. And it would apply only in four carefully-defined circumstances. First, basically natural or man-made disasters like “floods” or a “massive chemical spill.” Second, “public order disturbances that threaten the security of Canada.” Third, international emergencies that require Canada act effectively in a multinational alliance. Fourth, “war itself.”

I take you through this history because, first of all, you knew I was the only one who’d bother. And second, because Justin Trudeau’s first-ever invocation of Beatty’s bill will probably be tested in a court somewhere. So it’s interesting to read what Beatty had to say about the tests his bill set out for just such a challenge.

“Probably the most contentious clause in this Bill,” he said, was the one setting out the second circumstance, so-called “public-order emergencies,” which as it turned out, was indeed what Justin Trudeau responded to on Monday. To understand whether a given emergency qualifies, Beatty said, you have to look at the definition the new law provided.

The definition Beatty read on this November day in 1987 was, he said, “very stringent, indeed.” But it’s not the definition in the law as it stands today. Somewhere between introduction and passage, the proposed law was amended to make it more stringent. The final version of the Emergencies Act calls a national emergency “an urgent and critical situation of a temporary nature” that “seriously endangers the lives, health or safety of Canadians,” or one that “seriously threatens the ability of the Government of Canada to preserve the sovereignty, security and territorial integrity of Canada.”

So the question before us today is whether the blockades at Ottawa and, if they return, Windsor and Coutts seriously endanger the lives, health or safety of Canadians, or seriously threaten Canada’s sovereignty or territorial integrity. Do lives depend on using this law? Does Canada’s independence and survival?

You might say: Well, sure they do. This is an anti-vaxx protest, after all, at least in part, and every unvaccinated person is a potential disease vector. As for sovereignty and territorial integrity, well… I mean, maybe you could stretch that one to fit? But in deciding whether this law is needed today, it’s worth looking at all the other times previous governments decided it wasn’t needed.

What’s different about today? Look, the endless clot of metal and hot tubs around Parliament Hill is a serious problem. The astonishing surrender of the Ottawa Police is too, and that one’s going to be paying dividends in drastically reduced police legitimacy for years to come in this city, so thanks for that, everyone. And the weapons cache at Coutts  is deeply disturbing, though it would not be the first time since 1988 that large amounts of weapons were found together in Canada. And again, we’re looking for the justification in a once-in-34-years invocation of a novel law.

But I think the real explanation for today’s announcement came from Chrystia Freeland, who said it’s basically about the blocked Ambassador Bridge at Windsor. Inconveniently no longer blocked, but I digress. “We fought tooth and nail to protect Canada’s privileged relationship with the United States during the NAFTA negotiations,” the deputy prime minister said, “and we stood up to the 232 tariffs that were illegal and unjustified. We won’t let these hard-won victories be tarnished. The world is watching us. Our jobs, prosperity and livelihoods are at stake. That’s why the government is acting.”

So one way to understand the “stringent test” a young minister laid out 34 years ago for invoking special measures is: does the border impediment at Windsor and Coutts “seriously endanger” Canadians’ lives or “seriously threaten” Canada’s independence and survival? And again, the you-must-be-this-tall-to-ride test to apply is: was the current crisis worse than the crises of 2020, 2008 or 2001?

Parliament will get a chance to debate all of this in the next several days.