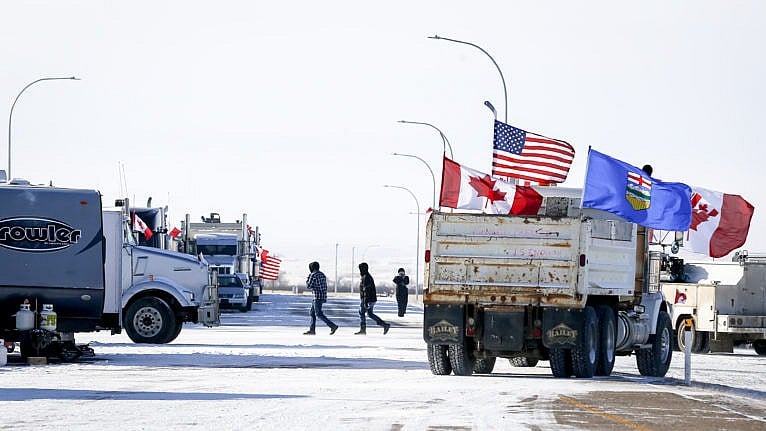 From Ottawa to the border blockades, everyone’s fighting storyline battles. In Alberta, truckers realized the weapons arrests battered their cause.

It’s hard to say definitively what impact the federal Emergencies Act declaration had on the truckers and blockaders at Coutts, Alta., leaving fewer than 24 hours later. The roadblock’s organizers maintain the invocation of the act wasn’t behind their quick exit, though it’s easy to imagine the prospect of federally compelled tow-truck operators, frozen bank accounts and de-insured trucks would figure into one’s calculus on whether a continued illegal occupation would be the wisest way to spend yet another weekday.

The group’s stated reason for clearing the largest Alberta-Montana border crossing after two weeks was a reminder that these “freedom convoy” actions are—when you strip the down beyond the tractor-trailer air brakes, massive trade disruption and disavowal of mainstream public-health science—public-relations exercises for their preferred cause. In that regard, they are not too different from that of a few dozen or hundred people waving signs in a public square against some foreign conflict or local budget cut.

Monday’s RCMP seizure of a massive cache of weapons and arrest of 13 people apparently cast a pall over the Coutts blockade. “We were always here peacefully and to control that narrative, we wanted to leave peacefully,” Marco Van Huigenbos, an organizer and town councillor in nearby Fort Macleod, told the Toronto Star. That’s why they left. To control the narrative. It’s not as though this ballcaps-and-buffalo-check-jackets crew had done like the Ottawa Police and hired consultants with Navigator, but narrative framing was near the forefront of their ambitions all the same.

Facts, whether real or in some funhouse alternative form, have to mesh with feelings to have any resonance.

Echo chambers don’t allow for a singular “narrative” to form, of course. While much of Canada interprets this as a hardened anti-vaccine/anti-mandate/anti-Trudeau minority holding hostage a key economic corridor until policies bend to their wishes, the narrative the blockaders’ believers have internalized is them as peaceful conscientious objectors who will be welcomed by most right-thinking Canadians as liberators and freedom fighters.

The Coutts gang’s problem, it appears, was that their small corps included a decent contingent that was armed to the teeth, and that threatened to overshadow all other narratives with a dark one. And hours after of the blockade ended, with group photos and a handshake-and-hugs receiving line with police officers—oh, the narratives police have woven these last few weeks—it emerged that three of those arrested were charged with conspiracy to murder, reinforcing the grimmest of assumptions that some protesters had intentions that had nothing to do with a vaccine mandate for truckers.

By now, it’s clear that the Coutts situation was a different beast from the Ambassador Bridge blockade, which is not the same as Ottawa’s occupation. And within that group, many have bought into the vast right-wing narrative and funding flowing from United States activists, as evidenced by some protest boosters urging the Alberta group to “stand your ground” and await “help coming from the south.”

Ottawa’s first-ever mashing of the Emergencies Act button certainly gives them a couple more tools to finally crack down on the law-breaking in that city’s core, to eliminate from Wellington Street (and any future truck-squatting venue) those who have learned how to weaponize holding their breath until they turn blue.

The new federal tactic’s ambition contains its fair share of narrative-building, too. Part of that is as a provocative signal to the protestors, but to an anxious citizenry as well. After all, the last several hellscape years have featured one official state of emergency declaration after the other. There are recurring (or unending) local and provincial states of emergency for COVID-19, for the opioid crisis, for climate disasters like floods and wildfires. They ostensibly serve to reorganize government’s internal response and action systems, and equip officials with some tools unavailable in normal times. But for most of the public, it comes across as a politician’s way of adding a double-underline to the situation.

The public’s ultimate reception of the Emergencies Act will no doubt come with how it’s used and what the outcome is. Fifty-two years ago, the War Measures Act became synonymous in Québec with military in their streets, but imagine how it would be remembered if Pierre Trudeau’s “just watch me” act had failed to defuse the FLQ terrorist threat and October Crisis? On the streets of Ottawa, this story is still being written.