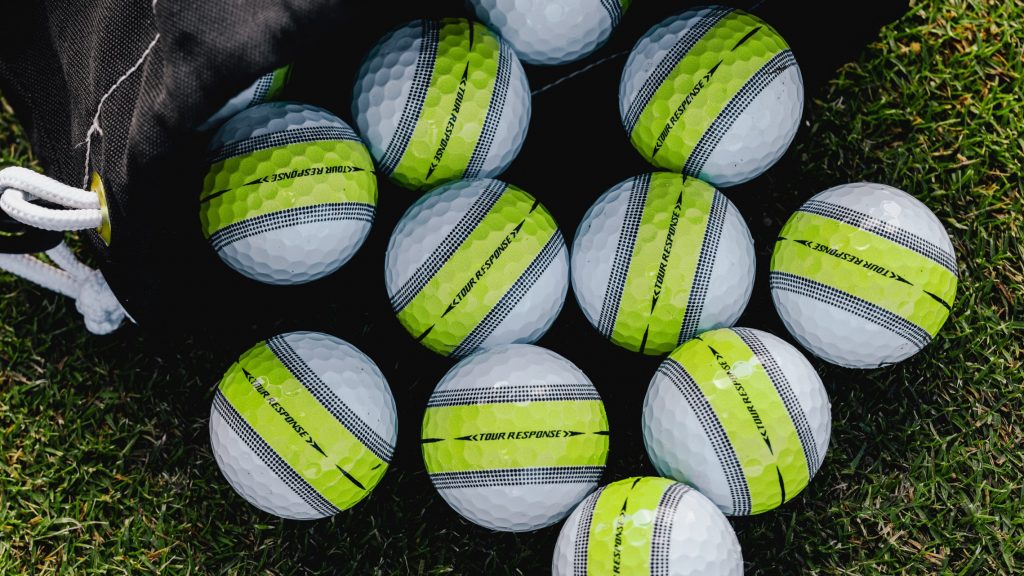 Fashion trends come and go but at TaylorMade, stripes are officially in season.

Part of a three-product launch today featuring updated versions of the Tour Response and Soft Response golf balls, the Carlsbad, Calif., brand has provided an alternative colourway with its new Tour Response Stripe.

The latest version of TaylorMade’s Pix with Clear Path Alignment technology has been positioned as the easiest ball product TaylorMade has created for alignment purposes. That claim is based on a unique 22-millimeter digital band that wraps completely around the centre of the golf ball.

After spending some time with one of the Tour Response Stripes on my home putting mat, here are a few observations:

1) The alignment functioning with this product is indeed next level. The band assists to aim a putt while the combined black inside line and TaylorMade branding makes it more specific in terms of path to the hole.

2) The feel off the putter face is the equal of the company’s flagship TP5/TP5x golf balls.

2) Feedback for your stroke is immediate. Strike a putt well and the stripe rolls consistently to the hole. Strike a putt off-centre and the digital band noticeably wobbles.

3) The visual of the dual-colour design should make Tour Response Stripe distinctive and easier to locate on the golf course.

“We have seen many professional and recreational golfers take advantage of Clear Path Alignment in our pix golf balls,” said Mike Fox, TaylorMade’s director of product creation, golf ball. “With the 360-degree design of Tour Response Stripe, alignment aid gets even easier for the everyday golfer.”

Both new Tour Response versions and Soft Response have been upgraded from the previous generations in both form and function.

TaylorMade has incorporated the same aerodynamic Tour Flight Dimple Pattern it uses in TP5 and TP5x to help achieve improved carry distance on all types of shots with Tour Response and Tour Response Stripe.

Specifically, the patterning is a dual-radius dimple shape. According to the company, it “decouples dimple volume from depth to optimize airflow around the ball during flight, ultimately reducing drag, optimizing lift and promoting distance.”

Also borrowed from TP5/TP5x was the Speedmantle with HFM (High Flex Modulus), a firmer second layer of the balls that surrounds the low compression core to produce faster ball speeds.

The 2022 Tour Response features a 70-compression.

Tour Response testing done at TaylorMade’s Kingdom facility indicates that as well as improved durability the new cover material is 12 per cent softer and 36 percent more flexible than the previous material.

“The new dimple pattern paired with a 100 per cent cast urethane cover simply creates a softer version of a Tour level ball made fro the everyday golfer that is looking to reap the benefits of our tour proven technology at an affordable price,” said Fox.

Soft Response is the softest ball TaylorMade has produced for retail.

Lowered from a 60-compression in the previous model to 50 in the 2022, the new Soft Response has been designed for more moderate swing speed players (slow-to-average).

Tested, reviewed and design influenced by everyday golfers during the prototyping process the three-piece Soft Response features a softer core and a re-engineered ionomer cover helping the product to maintain ball speed and distance while providing improved spin control.

Dimple patterning has also been modified in Soft Response. TaylorMade utilized a unique Extended Dimple Pattern, which decreases drag while optimizing lift to keep the ball in the air longer at lower speeds and lower spin rates according to the company.

“Normally if you go that much softer it is hard for the product to be as long as its prior generation, but we took advantage of the three layers of this product, which is unique at this price, to build up speed,” Fox said. “In addition, Soft Response maintains game changing distance at an incredible soft feel to become a true game-changer in this category.

Along with the Stripe version TaylorMade Tour Response comes in white and high visibility yellow and has a suggested retail price of $49.99.