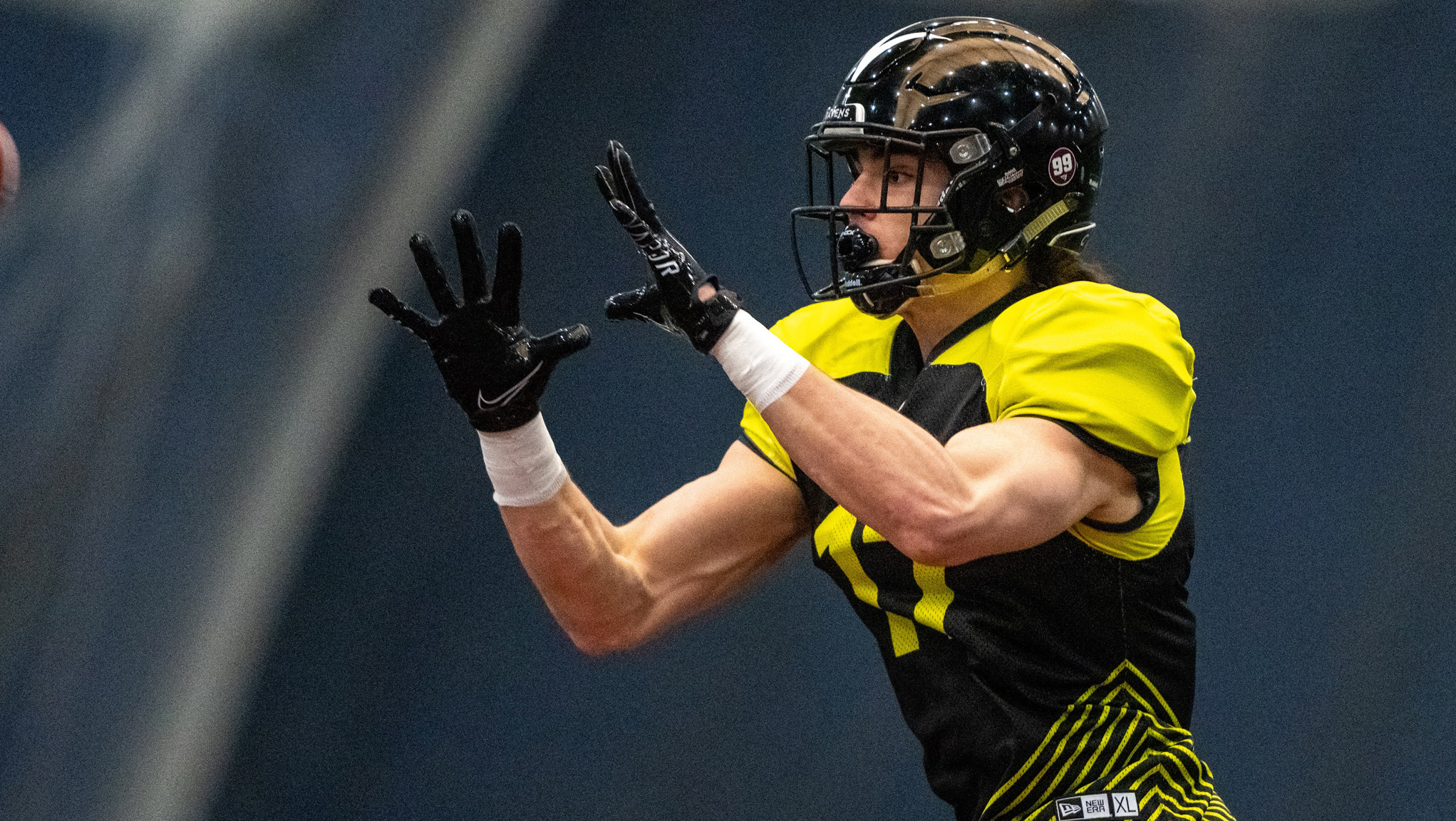 Stock assessments continue as we shift to some of the draft’s receivers and defensive backs.

Scouts and general managers have a few more weeks to process the testing results they’ve gathered on the country’s top draft-eligible prospects. Then it’s time for the draft, where many of these amateur athletes make the leap to the pros on May 3.

The CFL Combine presented by New Era painted part of the prospect picture at the end of March.

Each of those three helped themselves over the last month, the question now becomes when does Cobb – likely the front runner of the three – come off the board?

Every year there is a big body receiver with potential that I hope delivers by running well and giving hope that we don’t have to exclusively champion NCAA Canadian pass-catchers or the undersized variety above.

Bruggeling delivered this year and now becomes one of the interesting swing picks in the top three rounds as we see which CFL club believes his productive capacity far exceeds what’s been shown at Carleton.

Before you get out the torches and pitchforks for me on this one, hear me out. I love the Philpots’ production and story as much as you do, but the numbers were surprisingly underwhelming.

I’ve seen a lot of people Monday Morning Quarterbacking the idea that we all should have expected the athletic measures to land in the average range of receivers tested since 2001, but the Philpots are anything but average. On-field, they are special and while we shouldn’t have expected the greatest workout of all-time, I certainly didn’t expect them to land amongst names like Mitch Picton, Dave Stala and Julan Lynch in my combine score measurement of overall performance.

With that being said, they weren’t far off from Danny Vandervoort, who still went in the first round where I believe both Philpots still could. They now become an incredibly interesting case study in eye test versus measurables that teams believe are necessary prerequisites to professional football success and longevity.

While I love his story as much as anyone – go read Chris O’Leary’s piece from this week – Lam left me wanting a bit more before the helmets went on Sunday. He measured in smaller than I thought and didn’t run or jump the way I expected after watching the uncanny ability to contort his body and make jaw dropping catches.

There’s no question he understands route running and can separate from defenders, but in the context of modern CFL roster construction, is that enough for a Canadian receiver?

An elite return man with developing receiver skills, Smith’s player profile is well understood and respected. He held himself to a high standard over combine weekend and delivered right about where I thought he would going in. Job well done and stock stable.

Petermann is quick, runs smooth routes and has some of the best hands of this entire receiver draft class. All while emulating the style and success of older brother Dan, who himself was highly sought after in the draft before bouncing through Winnipeg, Ottawa and now BC, where he should get some love this season.

With a frame measuring in at six-foot-two and 218 pounds, Fiske-Casault projects as more of a fullback, H-back convert with special teams upside but there is no denying his hands in big moments for Montreal last season. His draft stock is completely dependent on how each team views his fit on their roster.

He didn’t have to do every test, but he did because Tyrell Ford wanted to show how great he can be. In a time where players accept Pro Day or Regional Combine numbers as their resume, Ford embraced the chance to do it all and posted one of the best defensive back workouts on record.

He also had extremely competitive padded reps against the Philpot brothers and has return game experience to match his 4.42 speed. Whatever you thought his stock was before, it went up last weekend.

Adrian Greene is seen here in coverage against Tyson Philpot at the CFL Combine in March (Kevin Sousa/CFL.ca)

Hillsdale Chargers DB Zach Herzog, Ottawa Gee-Gees DB Chris Ciguineau and Saint Mary’s Huskies DB Adrian Greene are the perfect examples of why the Regional Combine process is so important. Yes, players that make an impact coming from these are a dime a dozen, but that dime is worth sifting through the haystack to find and all three of these men benefitted from the smaller, lower pressure Regional Combine setting to advance and bump their draft stock in a big way.

I was really excited to see Pierre stack up against the Ciguineau’s and Greene’s of the world but it wasn’t meant to be as a nagging injury prevented him from dressing on Sunday and completing multiple tests.

Before the combine Sutton spoke about setting a special 40-yard time and came in with the brash swagger NCAA players tend to approach the CFL Combine with.

He left measuring in as one of the smallest defensive backs in recent combine history, registering one bench rep and no other tests thanks to injuries BUT he has experience on special teams and at corner against division one receivers. Where does the put him on teams draft boards? Likely not high, but your guess is as good as mine.

I just like Jayden Dalke a lot. His likeable personality and above average build leaves something wanting when it comes to top end speed, but I think teams know who he is and what he’s about entering the draft as a big body free safety who comes down hill in a hurry.

At the Ontario Regional there were a handful of defensive backs from the York Lions, but none caught my eye for his smooth movement and natural speed more than Daniel Amoako. He is a developmental player who would need to add some strength and weight to compete on special teams but there are some base characteristics to work with here.

I love Gandire’s game film. He attacks the football in the air relentlessly and has a natural mix of speed and physicality that looks CFL worthy from the jump. I don’t know where his natural fit is at the next level, but I wonder if a team might view him as a third free safety who could develop on special teams early on.