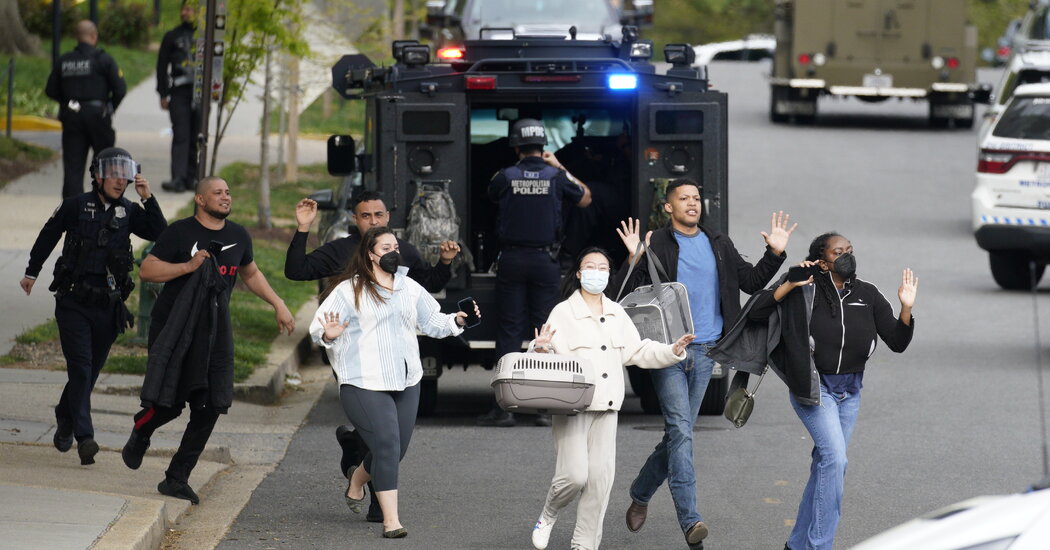 A suspect who the police said had set up a tripod in an apartment along one of Washington’s busiest corridors and randomly fired more than 20 rounds, injuring four people, killed himself Friday night as the police prepared to enter his apartment, the police said.

News of the suspect’s death came about six hours after the 3:20 p.m. shooting, which sent people scurrying for safety and prompted the police to have residents and students in the area shelter in place as they searched for an assailant.

The terror and confusion ended late Friday when the city’s police chief, Police Chief Robert J. Contee III, announced just after 9:30 p.m. that the suspect in the case was found dead in a fifth-floor apartment, where he had a tripod that police described as a “sniper-style setup.”

Those injured in the shooting included three adults and a 12-year-old girl. Two of the adults were in stable condition Friday evening at a hospital; the girl was in stable condition with minor wounds; and a woman who was grazed by a bullet was treated at the scene.

During an earlier news conference, the police said they were searching for a “person of interest,” Raymond Spencer, 23, of Fairfax, Va., whom they wanted to question. Mr. Spencer’s name emerged “based upon the things we have seen on social media,” said Stuart Emerman, assistant chief of the Metropolitan Police Department.

Later in the night, Chief Contee said he would not release the name of the deceased suspect until the family was notified. But he said that the police were no longer looking for the person of interest.

After reports of gunfire in the midafternoon, police officers responded to the 2900 block of Van Ness Street N.W., off Connecticut Avenue and conducted sweeps “in several buildings,” the police said. The Police Department advised those in the Cleveland Park and Van Ness areas to stay inside.

Possible video of the attack circulated online and depicted bursts of rapid gunfire from an elevated location.

For hours after the shooting, dozens of police cars and emergency vehicles remained on Connecticut Avenue, with several blocks still closed to traffic. Additional emergency vehicles, including a truck adorned with the insignia of Homeland Security and Emergency Management, also arrived on the scene.

Laila, a freshman at Edmund Burke School who declined to share her last name, said that she was walking from a CVS store toward the school when she heard the first round of shots. She thought it was construction noise.

“Then the second round of shots happened and my friends were running,” she wrote in a message on Instagram. She and others were told that there was a shooter in the area. She and her friends ran to her house nearby, where they waited for additional information, she said.

Parents waited for their children outside the school. The police said that a family reunification site had been established at the Cleveland Park Library, on the 3300 block of Connecticut Avenue.

One woman, who asked to be identified only by her first name, Birtukan, said her 13-year-old daughter attends Edmund Burke. She was walking to pick up the child at around 3:30 p.m. when her daughter texted her to say not to come to the school.

The shooting also happened near student housing at the University of the District of Columbia, the university said on Twitter.

She said she did not hear the gunfire but heard lots of sirens that she first attributed to a passing motorcade, which is a common occurrence on Connecticut Avenue.

But then she heard helicopters, prompting her to leave the building to try to see what was going on.

She described a scene of about 100 law enforcement officers and several armored vehicles clogging the street. She said heavily armed officers were escorting people from the AVA Van Ness building in groups of 10 or 15. At one point, she said, she saw about 30 officers swarm the building.

She said she had lived in the neighborhood for three years. “This is the first time I’ve heard any like this,” she said.

Mayor Muriel Bowser of Washington said at the news briefing on Friday night that the country has experienced “too much” gun violence and that people should not be afraid to take their children to school.

“I had to look in parents’ eyes tonight who were terrified,” she said, “and they were terrified thinking of what might happen to their children.”