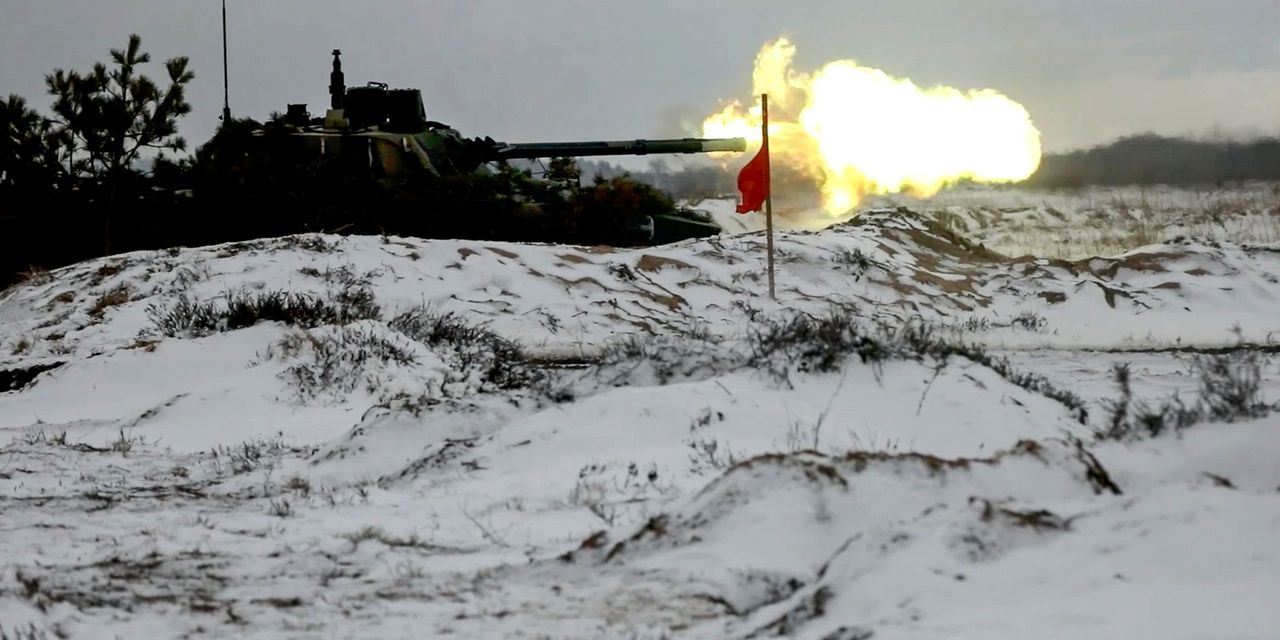 Russia kicked off large-scale military exercises in Belarus on its western borders with Poland and Lithuania and along its southern flank near Ukraine, an escalation of the standoff between Moscow and Western powers and a possible precursor to a Russian invasion of a smaller neighbor.

Western officials believe the Russian exercises in Belarus could open a possible new vector to launch an attack on Ukraine, adding to the 100,000 troops Moscow has already deployed to the Russian-Ukrainian border. The Kremlin says the military activity is in response to a threat from the West to its own security.

Russia and Belarus, which conduct joint military drills routinely, have said the exercises, called United Resolve, are meant to test the readiness of their forces in neutralizing military threats and securing borders.

on Thursday denounced the exercises as psychological pressure, while French Foreign Minister

described them as a violent gesture. In Moscow, Russian Foreign Minister

said that Western concerns over the drills were incomprehensible.

Moscow has said the troops will leave Belarus once the exercises conclude on Feb. 20. Ukraine launched its own military exercises in response on Thursday involving drones and antitank weapons sent by North Atlantic Treaty Organization members Turkey and the U.K. Those drills will also conclude on Feb. 20.

Also Thursday, the U.S. Navy said that it had deployed four more destroyers to Europe, for maritime exercises with NATO allies. The Navy didn’t say how long the ships would operate in the region. The destroyers join four other destroyers already assigned there.

Russia and Ukraine haven’t disclosed the number of troops involved in drills, which started Thursday. Russia’s Defense Ministry has said they don’t exceed limits set by a 2011 agreement with Europe, according to which exercises involving more than 9,000 troops require notification.

announced the drills in late December during a joint summit with his Belarusian counterpart,

But the U.S. and NATO expect the drills to involve 30,000 troops, making them the largest military exercises since the Cold War. They warn that the exercises could be part of a possible Russian invasion of Ukraine.

Military analysts say the timing of the exercises and the total number of troops and kind of weapons systems deployed confirm that view.

They said that, according to satellite imagery and open-source data, Moscow has deployed as part of the drills SU-25 and SU-35 jet fighters, electronic jamming systems, nuclear-capable Iskander missile systems and S-400 surface-to-air missile systems to Belarus, which shares a 700-mile border with Ukraine.

What steps should the international community take to prevent a Russian invasion of Ukraine? Join the conversation below.

“This is clearly more than a readiness exercise,” said Rob Lee, an expert on the Russian military and fellow at the Foreign Policy Research Institute, a U.S. think tank. “At minimum it is coercive—or it is part of preparations for an invasion.”

Military analysts also point to the late announcement of the drills and their timing in February—compared with August or September for previous exercises there—as being out of the ordinary.

Furthermore, the troops have been transported across thousands of miles from Russia’s far east, while the soldiers in western Russia typically deployed for drills in Belarus have remained in place. Analysts said that Moscow might be keeping them ready for an incursion into eastern Ukraine, already the site of a protracted Moscow-backed rebellion.

The extensive military buildup just 140 miles from Kyiv has prompted fears that Russia could launch a multidirectional attack.

Moscow, which has said it isn’t planning an invasion, has massed troops in southern Russia around Ukraine and on the Crimean peninsula—which it annexed in 2014—effectively surrounding the country. The Kremlin has also deployed warships to the Black Sea for naval exercises later this month.

Even if Russia doesn’t enter Ukraine through Belarus in an invasion, the deployments would stretch Kyiv’s forces by having to defend against a threat to the north, military experts said.

They also allow Moscow to defend its exposed western exclave of Kaliningrad, which is sandwiched between the EU and NATO members Poland and Lithuania, and provide an effective deterrent against NATO. The electronic-jamming systems, Mr. Lee pointed out, could be used to stop NATO members from helping Kyiv with intelligence gathering.

Ultimately, said Russian military analyst Pavel Felgenhauer, Moscow’s priority is “to create diversions, muddy the waters, create a false narrative so that its main offensive—if it comes—would be more of a surprise.”

U.S. officials on Sunday estimated that Moscow had in place 70% of the forces it needs to launch a full-scale invasion. The Belarus deployments could be one of the last pieces in the puzzle.

“Political intentions can change very swiftly but capabilities can’t. And the capabilities for a big regional war are now in place,” Mr. Felgenhauer said.

Russia’s deployments to Belarus have been invited by the country’s longtime leader, Mr. Lukashenko, who last month said they were needed to respond to the presence of NATO troops in Poland and the Baltic states, and Ukrainian forces at his border. The Ukrainian troops were deployed there in response to last fall’s migrant crisis at the Belarus-Poland border that Western officials accuse Mr. Lukashenko of engineering.

Mr. Lukashenko, who has ruled Belarus since 1994, has become increasingly reliant on Moscow’s patronage, after the U.S. and the EU imposed punishing sanctions on his government and state companies for brutally putting down protests in August 2020, diverting a

flight carrying a dissident journalist and forcing it to land in Minsk last May and orchestrating the migrant crisis.

Artyom Shraibman, a Belarusian political analyst, said that Mr. Lukashenko in recent months had increasingly staked out a position as a key military ally as a way to prove his value to the Kremlin leadership and ensure Moscow continues to back him.

Mr. Lukashenko’s “only way forward is to depend on Russia,” Mr. Shraibman said. “His political survival rests on Putin always finding it necessary to support him because he is a dependable ally in hard times.”

The Kremlin has welcomed Mr. Lukashenko’s strategy. “This allows Moscow to have an extremely loyal military outpost aimed in an important direction,” said Fyodor Lukyanov, chairman of a Kremlin advisory board on foreign and defense policy. “Given the political phase that we find ourselves in right now with the West and Ukraine, it’s a very valuable asset to have in the current moment and coming period.”

In recent months, Mr. Lukashenko has endorsed Russia’s annexation of Crimea, ended Belarus’s neutral stance on the Ukraine conflict and offered to allow Moscow to deploy nuclear weapons in his country. Russia in turn has extended Minsk some $2 billion in loans.

In an interview with a pro-Kremlin television host on Sunday, Mr. Lukashenko said Belarus would launch joint military operations with Russia against Kyiv if it attacked Moscow-backed separatists in eastern Ukraine.

“Do you think we are joking at the southern border?” Mr. Lukashenko said, referring to the joint Russian-Belarusian exercises.

A tighter alliance between Moscow and Minsk heralds an extended confrontation with NATO, said Nigel Gould-Davies, a senior fellow for Russia and Eurasia at the International Institute for Strategic Studies, a U.K. think tank.

In the standoff over Ukraine, Mr. Putin has demanded that NATO not accept any more Eastern European countries and stop deploying troops and weapons near Russia’s borders. With Mr. Lukashenko firmly on the Russian president’s side, Mr. Gould-Davies, a former U.K. ambassador to Belarus, worries that the threat from Belarus might not just be directed at Ukraine in the coming months.

“In all of what’s going on, with complex moving parts and a great deal of uncertainty, we should assume that Russia will do things that we are not necessarily looking at, or are focusing on,” he said. “They will plan to surprise us.”

—Nancy A. Youssef in Washington contributed to this article.