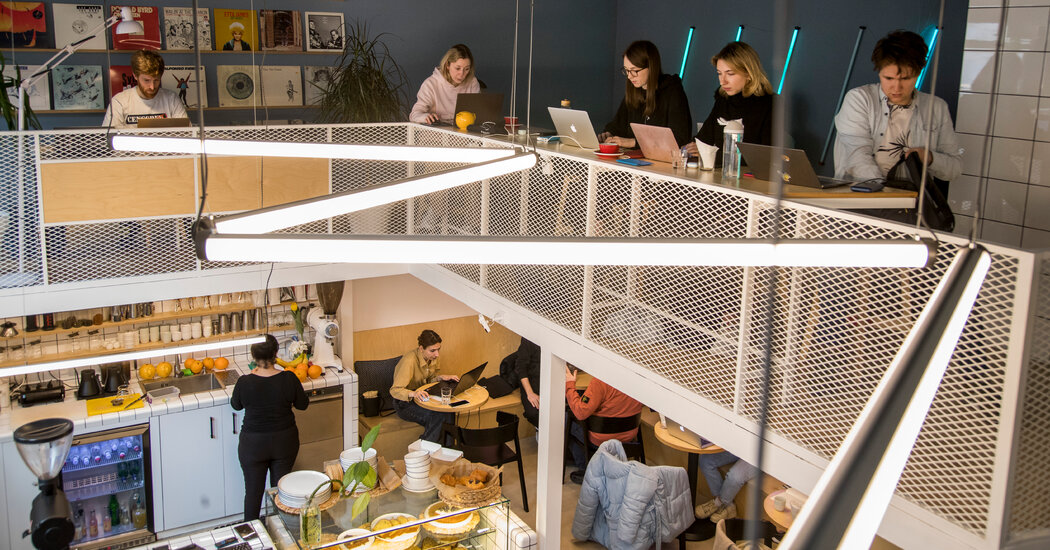 YEREVAN, Armenia — At the Lumen cafe in the Armenian capital, Russians arrive as soon as the doors open, ordering specialty coffees, opening up their sleek Apple laptops and trying to navigate a dwindling array of options for starting their lives over.

The background music and the sunlit interior are calming counterpoints to the frantic departures from their country, where they left behind parents, pets and the sense of home that all but vanished when Russia invaded Ukraine last month.

“This war was something I thought could never happen,” said Polina Loseva, 29, a web designer from Moscow working with a private Russian I.T. company that she did not want to name. “When it started, I felt that now, everything is possible. Already they are putting people in jail for some harmless words on Facebook. It was safer to leave.”

Russia is hemorrhaging outward-looking young professionals who were part of a global economy that has largely cut off their country.

Before the war broke out, only about 3,000 to 4,000 Russians were registered as workers in Armenia, according to officials. But in the two weeks following the invasion, at least an equal number arrived almost every day in this small country. While thousands have moved on to other destinations, government officials said late last week that about 20,000 remained. Tens of thousands more are looking to start new lives in other countries.

The speed and scale of the exodus are evidence of a seismic shift that the invasion set off inside Russia. Though President Vladimir V. Putin repressed dissent, Russia until last month remained a place where people could travel relatively unfettered overseas, with a mostly uncensored internet that gave a platform to independent media, a thriving tech industry and a world-class arts scene. Life was good, the émigrés said.

For the new arrivals in Armenia, a sense of controlled panic overlays the guilt of leaving their families, friends and homeland, along with the fear of speaking openly and the sorrow of seeing a country they love doing something they hate.

“Most of those who left oppose the war because they are connected to the world and they understand what’s happening,” said Ivan, part-owner of a Cyprus-based video game development firm. He and many other Russian exiles interviewed in Armenia said they did not want to give their full names for fear of repercussions at home.

Ms. Loseva and her boyfriend, Roman Zhigalov, a 32-year-old web developer who works for the same company that she does, sat at a table in the crowded cafe with friends who were looking for a place to stay. Dressed in jeans and a sweatshirt, she leaned against Mr. Zhigalov, closing her eyes as he put his arm around her shoulder.

“A month ago, I didn’t want to move to another country,” she said. “But now, I don’t want to go back. It’s not the country I want to live in anymore.”

At other tables in the small cafe, young Russians tapped on laptops or checked their Apple watches. Some logged into Zoom meetings; others searched for places that they could afford to rent with their savings inaccessible.

But the plunge in the ruble, which at one point had lost about 40 percent of its value against the U.S. dollar, and the soaring housing costs in Armenia, which are priced in dollars, have left some who lived in stylish apartments in Moscow contemplating moves from budget hotels to even cheaper hostels with bunk beds and shared bathrooms.

Most of those who have come to Armenia work in I.T. and other sectors that rely on unfettered internet and international banking links, the country’s economy minister, Vahan Kerobyan, told The New York Times.

But among those who have fled Russia are also bloggers, journalists or activists who feared arrest under the country’s draconian new law that makes it a crime even to use the word “war” in connection with Ukraine.

Some of the recent Russian arrivals in Armenia said they have contracts that will pay them for at least a couple of months of working remotely if they can find a way to get the money. Others said they had been relocated to Armenia by U.S. and other I.T. firms, which continue to pay their salaries. But many have been left scrambling to access enough money to scrape together apartment deposits.

Visa, Mastercard and PayPal have all cut ties with Russia, leaving only the Russian Mir bank card, which is accepted in Armenia and a very few other countries, for electronic payments.

Kate, 26, who works at an aid agency, said the night before she and her boyfriend left Moscow, they went from A.T.M. to A.T.M. for three hours, unsuccessfully trying to withdraw dollars. At every cash machine, people with bodyguards would push to the front of the line and withdraw $5,000 at a time until the machines were empty, she recalled.

“We couldn’t say anything because it felt really dangerous,” she said.

Tens of thousands of other Russian exiles have traveled to Georgia and Turkey. But Armenia, a former Soviet republic which has remained neutral in the conflict, has offered the softest landing. Unlike the reception in Georgia, none of the Russians interviewed said they had encountered hostility. Here, they can enter the country without visas or even passports and stay up to six months, and Russian is widely spoken.

For some, the anguish of leaving their country is compounded by the feeling that the world increasingly equates all Russians with their president.

Maria, a 30-year-old Russian travel guide editor who had arrived in Armenia the previous week, also worried about the hostility.

“What do people in America think of Russians?” she asked earnestly. “Do they hate us?”

Maria said she had been involved in anti-government protests in Russia in 2018.

“I was so scared,” she said of her decision to leave with her husband, a manager of a sports training center. “I was afraid of being arrested if I went out to protest. And to live there and do nothing, I don’t want to live like that.”

Most of the Russians interviewed said they left because crushing international sanctions had made it impossible to work for companies from other countries or with foreign clients, or because they feared that Russia could close its borders.

Like many of the men who left, her husband, Evgeny, feared that he could be conscripted and forced to fight in Ukraine. The couple scrambled to find a flight out of Moscow after most airlines had cut ties with Russia, eventually spending almost all the money they had on tickets for a flight to Yerevan.

Many of those who left are entrepreneurs or freelancers in industries that relied on foreign clients, who have cut ties with them, even for work outside of Russia.

A Ukrainian base is hit. A missile attack on a barracks in the southern city of Mykolaiv killed as many as 40, a Ukrainian official said. That number would make it one of the single deadliest attacks on Ukrainian forces since the start of the war, and the death toll could be much higher.

The Biden-Xi talk. In a two-hour call with China’s president, Xi Jinping, President Biden discussed the Russian invasion of Ukraine, detailing the implications and consequences if Beijing were to provide material support to Russia in its attacks.

Displaced Ukrainians. The United Nations said that more than a fifth of the 44 million people who were living in Ukraine before Russia invaded have been internally displaced or have fled to other countries, according to the body’s estimates.

“They just tell us, ‘Sorry guys. We hope to work together in the future but right now, we cannot,’” Ivan, the video game developer, said of his European partners.

At another cafe, 35-year-old Alex, his blond hair pulled back with a hair tie and arms tattooed with milestones in his life, said he spent four hours at the Moscow airport while his flight was delayed, drinking gin and tonics.

“I just got drunk in the airport to get some courage,” he said. “I probably should have left earlier, but I’m in love with my country.”

Alex, who did not want to say what industry he worked in, said he cried as he listened to voice messages from Ukrainian friends who had been called up to fight.

“These guys were sitting around, smoking cigarettes, drinking beer, playing music,” he said. “The next day, they had to go get a gun and defend their country. These were people who had never held a gun before. It’s horrible.”

For many Russians, there is also the pain of a generational divide with parents and grandparents who grew up in the former Soviet Union.

“My parents, my grandma and grandpa are watching TV and totally believing the TV line so it hurts to speak with them,” said Kate, the aid worker. “At one point, I realized I loved them too much to argue. So I said, let’s not talk about it.”

“I don’t have any stable ground under my feet,” she said. “We are here now, but we don’t know where we will be in a week or a month, or even tomorrow.”

At the Yerevan airport last week, Viktoria Poymenova, 22, and her boyfriend, Bulat Mustafin, 24, from the Russian city of Mineralnye Vody, wheeled out a tower of suitcases, bulging backpacks and two small carriers holding their small rescue dog, Mukha, and their tortoiseshell cat, Kisya.

Mr. Mustafin, an engineer, worked as a technician for film projectors in cinemas, which are now unable to show films from Hollywood studios, since they have cut ties with Russia.

Ms. Poymenova teaches web programming for a Cyprus-based online school. Their plan was to find an affordable apartment in Georgia.