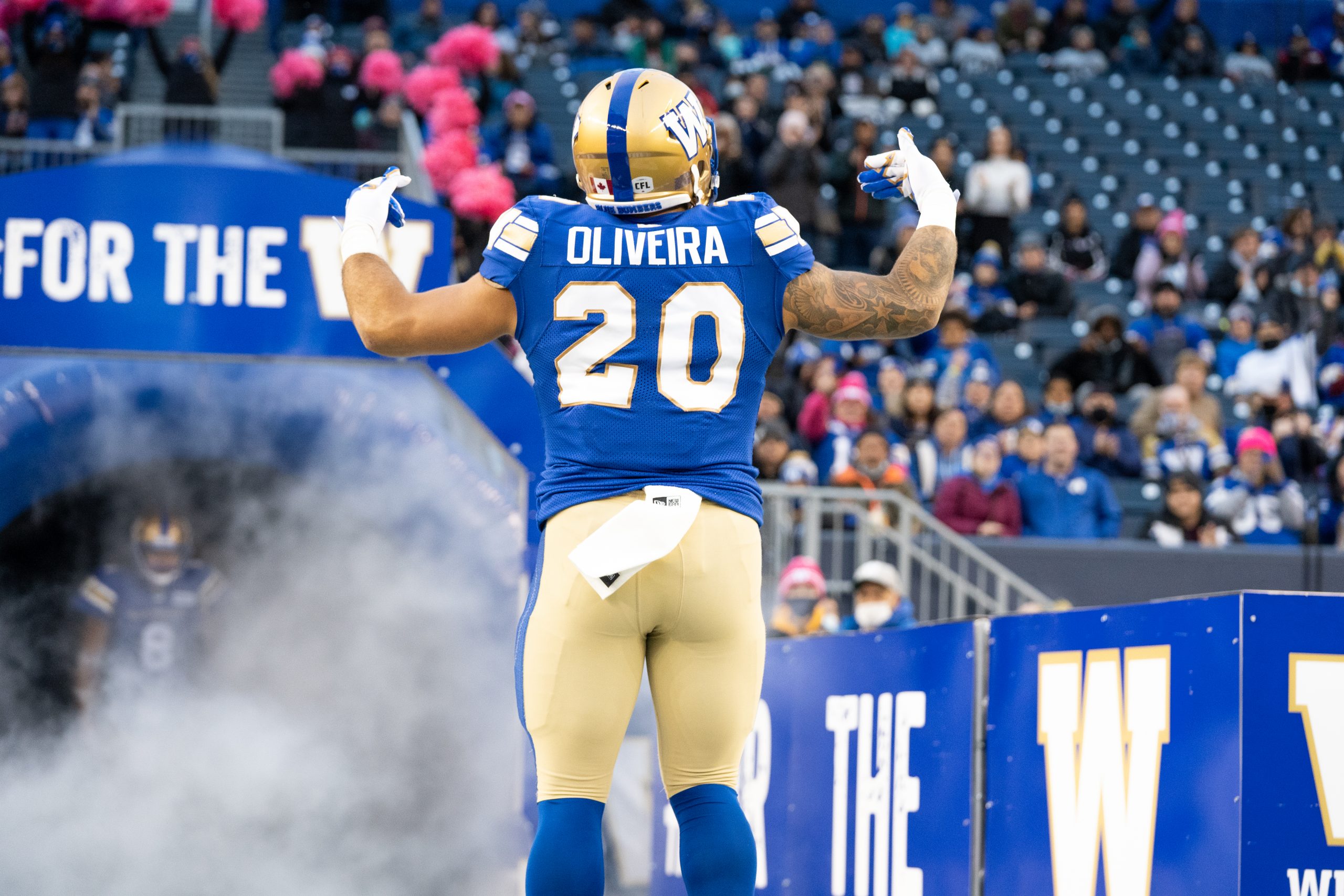 It was a day everyone knew would eventually come, and yet when the moment did arrive it still stung like a simultaneous knife in the back and a stake in the heart. Andrew Harris had been the face of the Winnipeg Blue Bombers for five seasons, after all, and played a leading role in helping deliver two Grey Cup championships to his hometown.

But on February 8th – the first day of the Canadian Football League’s free agent market – the veteran running back traded his blue and gold by signing with the Toronto Argonauts. And just like that one era was ending and another beginning. That next chapter officially starts on Sunday when veterans are scheduled to take the field for the opening of main training camp and for the first time since 2015 Harris is no longer the club’s feature back.

Now, a year ago we already began seeing how the torch was gradually being passed from Harris to Brady Oliveira and Johnny Augustine. At 34 – now 35 – Harris came out of the pandemic struggling with his fitness and it cost him half of the condensed regular season. Still, when he was on, he was still the dominant future hall of famer, rushing for a team best 624 yards and then rushing for 136 yards in a dominant performance in the West Final and adding another 80 in the Grey Cup.

The silver lining to his absences last year was the opportunity it provided Oliveira and Augustine and the production those two provided in his place. Oliveira, like Harris a Winnipeg product, rushed for 429 yards and two TDs in his starts while Augustine rumbled for 285 yards – and a sparkling 7.1 yards per carry average – in his appearances, including one start. Bolstering that Canadian depth is Kyle Borsa, a 2021 CFL Draft pick who attended camp last year before returning to the University of Regina.

The club is also deep in homegrown depth at the fullback position with Mike Miller – the CFL’s all-time leading special teams tackler – having 2022 CFL Draft pick Konner Burtenshaw and former Western University regular Antonio Valvano listed behind him on the depth chart.

The Bombers have brought in a trio of intriguing American prospects in Northern State product Vance Barnes, who is a converted receiver, Central Florida’s Greg McCrae, who finished his collegiate days fourth in school history in rushing touchdowns and spent time in 2021 with Toronto and Shane Simpson – who is also a kick-return candidate – and spent his senior season at Virginia after starring at Towson State.

All that said, the starting running back gig seems to be Oliveira’s to lose – and with Augustine challenging him. These are big cleats to fill, both for the production Harris brought to the offence and the leadership he provided as an experienced hometown hero.

The production should come instantly, as Winnipeg’s backs are working behind the best offensive line in the league. The leadership and experience, however, takes years to develop.

TRAINING CAMP 2021 PREVIEW: A LOOK AT THE RUNNING BACKS

Even with the departure of Harris the Blue Bombers seem set with Oliveira and Augustine. Burtenshaw’s impact could come on special teams, where he will be tutored by Mike O’Shea and special teams coordinator Paul Boudreau, and working alongside the best in the biz in veteran Mike Miller.

Now 28, Augustine has found a home with the Blue Bombers as a reliable spot-duty starter in the backfield. He and Oliveira have similar straight-line running styles and do have the ability to be effective receivers out of the backfield.

A number that pops out when looking at Augustine’s career stats – he owns a 6.8-yard rushing average in 39 career games.

All three Bombers running backs had at least one 100-yard rushing game this season – a first for the club since 2008 (Charles Roberts, Fred Reid and Joe Smith) — and the first time that feat has been accomplished by three Canadians.