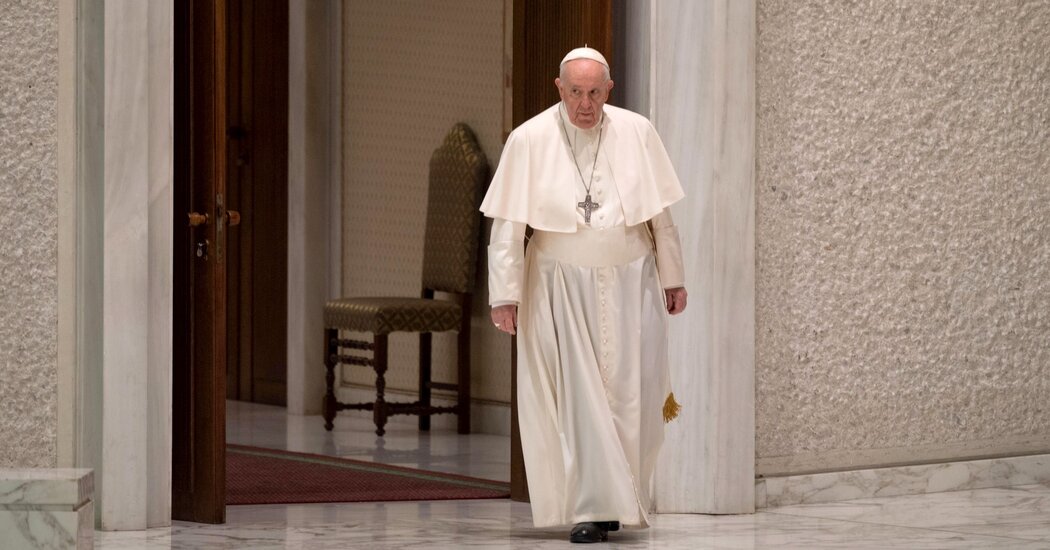 ROME — The day after Russia invaded Ukraine, Pope Francis broke protocol and went directly to the Russian Embassy in the Holy See to appeal for peace. The next day he spoke to President Volodymyr Zelensky of Ukraine, offering him spiritual support. As the war intensified, he raised his voice against “unacceptable armed aggression” and the “barbarism of the killing of children.”

“In the name of God,” he declared Sunday, “I ask you: Stop this massacre!”

Whom, though, was Francis asking?

The Pope has studiously avoided naming President Vladimir V. Putin of Russia, or even Russia itself, as the aggressor. And while he has said that whoever justifies violence with religious motivations “profanes the name” of God, he has avoided criticism of the war’s chief religious backer and apologist, Patriarch Kirill of the Russian Orthodox Church.

Unlike some European nationalists, who have suddenly blanked on Mr. Putin’s name to avoid reminding voters that they belonged to the Russian leader’s fan club, Francis’ motivation stems from his walking a fine line between global conscience, real-world diplomatic player and religious leader responsible for his own flock’s safety.

Nevertheless, some of his own bishops and other supporters within the Roman Catholic Church want him to name names, and historians say the pontiff risks slipping off his high moral ground and into a murky space occupied prominently by Pope Pius XII, the wartime pope who avoided speaking critically of Hitler and the Axis powers as Germany invaded Poland and eventually perpetrated the Holocaust.

“In many ways, the current plight of the pope does recall the situation that Pius XII faced,” said David I. Kertzer, a historian of the Vatican and Italy whose new book, “The Pope at War,” about Pius XII, Mussolini, and Hitler, will be published in June.

Mr. Kertzer said that Pius XII had also sought to balance internal interests and public demand to speak out as he resisted great pressure to denounce Hitler. Instead, he used generic language about the horrors of war, which Mr. Kertzer said Francis was now echoing. “The position he is taking, or not taking, is not risk free,” Mr. Kertzer noted.

A recent editorial in the National Catholic Reporter, which is usually sympathetic to Francis, urged the pope to call out Mr. Putin. “Whatever is happening behind the scenes, it is time for Francis to speak the truth about the murderous assault on Ukraine,” it said, adding, “It is time to call things as they are. This is Putin’s war and it is evil.”

The Vatican has come out swinging in defense of Francis. A front-page editorial on Monday in the Vatican’s daily newspaper, L’Osservatore Romano, noted, “Francis has been subject of criticism from those who hope that in his public statements he would explicitly name Vladimir Putin and Russia, as if the words of the pastor of the universal church should reflect the sound bites of a television news program.”

The editorial, written by Andrea Tornielli, an influential Vatican official, maintained a bitter tone. He argued that popes avoid naming aggressors “not out of cowardice or an excess of diplomatic prudence, but in order not to close the door, in order to always leave open a crack to the possibility of stopping the evil and saving human lives.”

Indeed, pontiffs have traditionally avoided picking sides in conflict to better preserve the church’s chances of playing a constructive role in potential peace talks. There are Roman Catholics all over the world and coming down on one side or another in a potential global conflagration could put millions at risk. And criticizing Kirill, whom Francis has spent years courting to mend a split between the western and eastern churches going back to 1054, could compound an already horrific situation by adding the dimension of a religious war.

But the editorial notably went further than Francis has overtly done, arguing that the pope sought to reveal the “hypocrisy of the Russian government” when he said on March 6, “This is not just a military operation but a war which sows death, destruction and misery.”

Some Catholic bishops in Ukraine and Poland have gone where the pope has not, casting blame on Patriarch Kirill, who has called Mr. Putin’s leadership “a miracle of God” and justified the war as necessary to stop the West’s spreading of “gay parades” into Christian territory. Bishop Stanislav Szyrokoradiuk of Odessa-Simferopol in Ukraine said on Italian television that he wanted stronger words from Francis about Kirill, who, the bishop said, “blesses this new Hitler and Russian fascism.”

Archbishop Stanislaw Gadecki, president of the Polish bishops’ conference, wrote in a March 2 letter to Patriarch Kirill that Russia’s crimes would eventually be brought before international courts. “However, even if someone manages to avoid this human justice,” he added, “there is a tribunal that cannot be avoided.”

On Wednesday, Francis and Kirill spoke in a videoconference, in which the two expressed “hope that a just peace can be achieved as soon as possible,” according to a statement by the Moscow patriarchate.

“That really rang a bell for me,” said Mr. Kertzer, who noted that during World War II, Pope Pius XII often added the caveat that true peace required justice. But, Mr. Kertzer said, that “was the language actually that Hitler used, and that Mussolini used” as both dictators complained that the injustice of the Treaty of Versailles prevented true peace and then tried to spin the pontiff’s carefully neutral language as evidence that he agreed with them.

An attack in the west. A missile strike rattled the outskirts of Lviv, a western city that has been a haven for people fleeing areas under siege. The mayor of the city said several missiles had struck an aircraft repair plant at the airport in Lviv, destroying the buildings.

A looming energy crisis. The International Energy Agency said that the repercussions of Russia’s invasion of Ukraine are likely to intensify over the next several months, and nations around the world should respond by reducing their use of oil and gas.

Mr. Kertzer said that while Francis was different in many ways from Pius XII, “he, too, is, whether knowingly or not, at the moment lending himself to being used by the Russians to support their position.”

The Vatican on Wednesday issued its own statement about the conversation between Francis and Kirill. It noted that Francis said, “There was a time, even in our churches, when people spoke of a holy war or a just war. Today we cannot speak in this manner. A Christian awareness of the importance of peace has developed.”

“Wars are always unjust,” he added, “since it is the people of God who pay.”

The role of the religious leaders may seem peripheral to the horrors on the ground in Ukraine. But religion, or Christian mysticism, has been central to Mr. Putin’s nationalist project at home and abroad. For years, European populists and even some traditionalists in the Roman Catholic Church viewed Mr. Putin, who met three times with Francis, as a true defender of Christendom because of his embrace of Christian heritage and opposition to liberal and progressive values.

Mr. Putin’s Catholic admirers sometimes compared the Russian leader to Pope John Paul II, who is often credited with helping bring down Soviet Communism, because both Mr. Putin and John Paul exalted the East’s and West’s shared Christian heritage over secular values, whether communist or liberal.

Mr. Putin’s nationalist and religion-imbued vision of a “Russky Mir,” or “Russian world,” is rooted in myth more than in real history but has been supported by Kirill. It has also been central to Mr. Putin’s rationale for the war.

In his July 2021 essay “On the Historical Unity of Russians and Ukrainians,” Mr. Putin refers to Prince Volodymyr, a Viking warlord who belonged to the Rus tribe in Kyiv and who converted to Christianity in the year 988. St. Vladimir of Kyiv, as the Russians came to call him, became credited with Christianizing Russia. Mr. Putin has argued that this ancient link between Ukraine and Russia “largely determines our affinity today,” justifying the invasion.

The historian Timothy D. Snyder has said that the connection between Kyiv and Moscow really arose in the late 1600s, when priests in Kyiv told their Moscow counterparts about the converted Volodymyr and their shared Rus heritage to improve connections to Russia, which was then ascendant.

More than 300 years later, amid a split between the Russian and Ukrainian churches, Francis became the first pontiff to meet a patriarch of the Russian Orthodox Church. In that meeting, with Kirill in Cuba in 2016, the leaders signed a declaration of common aims, including averting confrontation in Ukraine.

Now that Russia has unilaterally forced that confrontation, Francis’ pontificate-long project of healing the wounds between the eastern and western churches seems to have a cost of not publicly blaming Mr. Putin and Kirill for opening real wounds and spilling real blood. It’s not clear how long such papal neutrality is tenable.