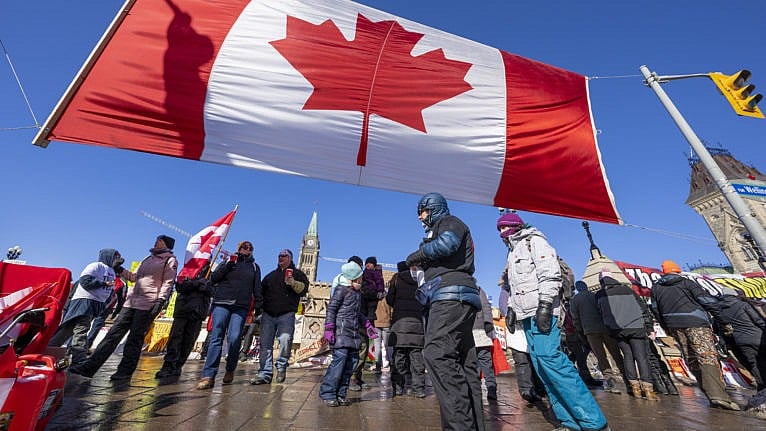 Deal, no deal: Ottawa Mayor Jim Watson announced Sunday that he had reached an agreement with Tamara Lich, spokeswoman for the Freedom Convoy, to move trucks from “residential” areas of Ottawa on Monday, Global reported Sunday afternoon, but the deal seemed to fall apart soon after, or did it?

The idea was to have the drivers move their rigs from the residential streets south of Parliament Hill.

The deal between Watson and the convoy means the city will allow more trucks to position themselves in what police have referred to as an “occupation” and “siege” outside Canada’s parliament buildings.  “Our residents are exhausted and on edge, and our small businesses impacted by your blockades are teetering on the brink of permanent closure. I don’t believe these harmful effects on our community and its residents were the intended consequences of your protest,” the letter, sent to members of the media Sunday, read.

Lich wrote her own letter, agreeing to work to “get buy-in from the truckers.”

“We look forward to working with authorities to ensure the safe movement of our trucks to their new locations,” Lich wrote to Watson. It’s unclear how effective the deal will be at limiting the protest’s footprint across the city, or how it will be received by Watson’s council colleagues – including those who have been increasingly vocal about Ottawa police’s failure to bring the occupation to an end.

Prepared to act? Earlier, a tough-talking Bill Blair, who was Toronto’s police chief during the violent G20 protests, told CTV the federal government is prepared to use emergency powers.

No plan: Watson’s accord with the convoyers came a few hours after Tonda McCharles reported in the Star that unnamed security sources say Ottawa police have “no plan” to end the protests.

Guns gone: In a we-hope-unrelated story, the Star reported that a truckload of firearms was stolen in Peterborough.

JTF2 off side: At least two of Canada’s elite anti-terrorist soldiers have been found to have participated in convoy protests, David Pugliese reports in the Citizen.

Maj.-Gen. Steve Boivin, the commander of Canadian Special Operations Forces Command, confirmed he has ordered the two investigations into the alleged activities of those in his organization. “The Canadian Special Operations Forces Command does not condone its members supporting and/or actively taking part in causes that jeopardize the apolitical imperative associated with their functions,” Boivin said in a statement to this newspaper. “I expect our members to act in ways that demonstrate Canadian Armed Forces values and ethics, and to uphold them both on and off duty.

Bridge cleared: Police managed to clear convoy-related protesters from the Ambassador Bridge on Sunday, CBC reports, and authorities got vehicles moving over it again on Sunday night.

Against blockades: Jason Kenney told Global Sunday that politicians should not be supporting law-breaking, which might be seen as a shot at CPC leadership candidate Pierre Poilievre, who has given the convoy his support: “We can never condone lawbreaking behaviour. Either we believe in the rule of law or we don’t, and you cannot apply that selectively based on the nature of a protest or where people come from on the political spectrum,” Kenney said. “I think one of the key principles of being a conservative is to believe in the rule of law, and law and order. That’s why we’ve made it very clear to the police here in Alberta: we expect full enforcement of the law.”

Blue soul: Speaking of Poilievre, Chantal Hebert has an intriguing column in the Star about the prospect of a Jean Charest run for the CPC leadership.

With Ottawa MP Pierre Poilievre as the perceived front-runner, the outlook could not be more different and the divide starker. For the many Conservatives who supported O’Toole’s efforts to recast the party along more mainstream lines, the scorched earth brand of conservatism Poilievre practises is a non-starter. They feel his disdain for carbon pricing, his visceral opposition to a child care social policy along the lines of Quebec’s popular program and, more recently, his flirtation with the convoy that has blockaded the federal capital along with strategic border points will make the party less rather than more attractive to mainstream voters. They are looking for someone strong enough to beat him. In many Conservative minds, the upcoming battle is one for the soul of the party.

Populism or no? Also in the Star, Susan Delacourt has a thoughtful column pondering the question of whether Trump-style populism can take hold in Canada. Experts are not convinced it will.

Protzer and Summerville have closely analyzed what exactly was brewing in countries such as the United States when populism crashed the gates of power. Populism, they found, requires deep, entrenched economic unfairness — a general sense in a large part of the population that people are trapped in their current economic classes. An absence of “social mobility” is how the experts describe it. That is a much more dire situation in the U.S. than it is in Canada, they argue. In social-mobility terms, Canada and the United States are worlds apart. Protzer, a research fellow at Harvard University, says frustration with COVID-19 restrictions — the spark for the convoy — is very different from the historic frustrations that gave rise to Trump or even Boris Johnson in the U.K. He describes the latter this way: “Two generations of economic unfairness, where people have felt that success is a product of family origins and elite machinations and not as a result of talent and effort.”

Too much: In the Toronto Sun, Anthony Furey, who has been a voice against mandates and other public health measures, has a column arguing that Canada’s leaders got the convoy because they were too slow to remove restrictions.

Then came the spark that really lit the fire: At a time when Canada should have been peeling away the rules, Prime Minister Justin Trudeau decided to layer more on, creating a new vaccine mandate for truckers. The freedom convoy that arrived in Ottawa after winding its way across Canada began as a small affair with a specific complaint against the trucker mandate. But it quickly turned into a symbol for something much larger — that Canadians of all walks of life were now feeling that they were done with their government messing around with them. They felt they’d been pushed too far and decided it was time to push back.

Pulled out: Canada pulled its troops out of Ukraine Sunday in preparation for an expected Russian invasion, CP reports.