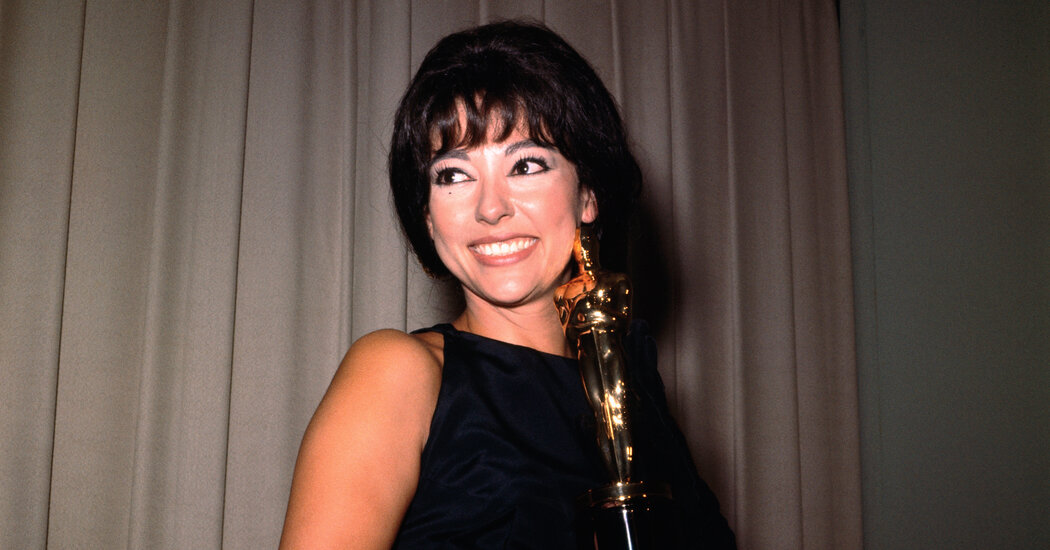 It was the night that cemented her place in history, and Rita Moreno almost skipped it.

In February 1962, Moreno, then 30, was in the Philippines, shooting “Cry of Battle” — a black-and-white World War II film in which she played the English-speaking leader of a band of Filipino fighters. So when she found out that she had been nominated for her first Academy Award — for best supporting actress for her performance as Anita in “West Side Story” — she took a moment to celebrate. And then, she got pragmatic.

As a star of “Cry of Battle,” she would still be needed on set — 7,300 miles from the Santa Monica Civic Auditorium, where that year’s Oscars ceremony would take place in April.

“I was absolutely positive Judy Garland was going to win for ‘Judgment at Nuremberg,’” Moreno, now 90 and still vivacious and irreverent, said in a recent phone conversation from Carmel-by-the-Sea, Calif., where she was on a trip with her daughter.

But then she won a Golden Globe — and had a change of heart. She decided to get on a plane.

“I flew into California thinking, ‘Hey, if there’s one iota of a chance that I may win, I need to be there,” said Moreno, who was up against Garland, Fay Bainter (“The Children’s Hour”), Lotte Lenya (“The Roman Spring of Mrs. Stone”) and Una Merkel (“Summer and Smoke”).

It didn’t hurt that the film she was nominated for — “West Side Story,” Robert Wise’s adaptation of the Broadway musical — was a hit both at the box office and among critics, or that it had racked up 11 nominations, including best picture. The New York Times film critic Bosley Crowther called it “a cinema masterpiece.”

But leading up to the ceremony, Moreno was so pessimistic about her chances that she practiced her “loser face” and made up speeches about how “it was a lousy movie” and she “didn’t want it anyway.” But her heart wasn’t in it. She did want to win — badly.

So on April 9, 1962, when Rock Hudson opened the envelope, paused, then read her name — making Moreno, who is Puerto Rican, the first Latina actress to win an Academy Award — her saucer-size eyes and open mouth said it all.

The 94th Academy Awards will be held on March 27 in Los Angeles.

“I didn’t expect to win,” Moreno said, then added with a laugh, “No one who’s watched it can argue with that.”

But as she walked to the stage in her Pitoy Moreno gown, with a voluminous black-and-gold skirt and black sleeveless top, open-mouthed every step of the way, she had just one thing on her mind. (Well, two: The first, she said, was “Don’t run; it’s not dignified.”)

“I remember thinking very clearly, ‘Do not thank anyone,’” she said. “They didn’t give you the part as a favor. They were forced to give it to you because you did the best screen test.”

She delivered one of the shortest acceptance speeches in Oscars history: “I can’t believe it! Good Lord! I leave you with that.” It lasted just seven seconds.

“I ran out of anything to say once I decided I wasn’t going to say thank you,” she said. “And I’ve been trying to make up for it with long acceptance speeches ever since.”

But offstage, her night was only getting started: After accepting the award from Hudson, she ran into Joan Crawford backstage, who was there to present the best actor award and, as Moreno put it, “drunk as a skunk on vodka.”

“She hugged me so hard she covered my face entirely,” Moreno said. “She was built like a linebacker. And she’s hugging me and the photographer is saying ‘Miss Crawford, I can’t see your face. Would you please uncover your face?’”

Backstage Moreno missed the night’s other most memorable bit of drama: A New York City cabdriver, upset that Bob Hope hadn’t been nominated for his role as a radio host in “The Big Broadcast of 1938,” sneaked in, climbed onstage and announced, “Ladies and gentleman, I’m the world’s greatest gate-crasher and I just came here to present Bob Hope with his 1938 trophy.”

He promptly produced a homemade statuette.

“Really?” Moreno said when told of the episode. “I don’t recall that at all! I must’ve won the Oscar just before that and been in the press room. That’s the only way I wouldn’t remember that. That’s unforgettable.”

Moreno didn’t linger too long after her big win, as she had a 15-hour flight back to Manila the next day. Her early departure also meant she missed all the phone calls, flowers and telegrams that arrived for her in the United States. But a friend told her later that up and down El Barrio in New York — Latinos stuck their heads out their windows the moment Hudson announced Moreno’s name — and screamed.

“I was deprived of all of that wonderfulness because I had to go back and make this [expletive] war movie in Manila,” she said.

Our Reviews of the 10 Best-Picture Oscar Nominees

“Don’t Look Up.” Two astronomers discover a comet headed straight for Earth. When they pass along the bad news, the president of the United States has other things on her mind to pay attention to than the impending catastrophe.

“Drive My Car.” A theater director grapples with the death of his wife, as he mounts a production of “Uncle Vanya.” A chauffeur assigned by the theater company ferries him to and from work while holding back vast emotional reserves of her own.

“Licorice Pizza.” In Paul Thomas Anderson’s coming-of-age romance, a child performer who has hit maximum adolescent awkwardness is aging out of his professional niche. His encounter with 20-something Alana, whom he instantly falls for, gets the story’s juices going.

“Nightmare Alley.” A grifter with empty pockets and a mysterious past joins the sleazoid world of 1930s back-road carnivals. He soon begins cycling through women, including a clairvoyant whose husband once had a successful mentalist act.

“The Power of the Dog.” Phil Burbank has been playing cowboy his entire adult life, raising cattle on his family’s Montana ranch for decades. When his brother George marries a widow with a teenage son, a lifelong family dynamic is disrupted.

“West Side Story.” Steven Spielberg’s remake of one of Broadway’s most celebrated musicals — a modern take on “Romeo and Juliet” — centers on the forbidden love between Tony and Maria, who are involved with two rival street gangs in Manhattan’s West Side in the 1950s.

Her Oscar win, she said, did not open doors for her — it did the opposite.

“I remember thinking after the movie came out and after the Oscars happened, ‘Wow, my career is made,’” said Moreno, who has gone on to become one of a group of just 16 to have won an Emmy, a Grammy, an Oscar and a Tony. “But I became this dark-skinned girl, which at the time was really a typecasting thing that almost ended my career.” (Her skin was infamously darkened for the role, over her objections.)

In the years leading up to “West Side Story,” she had perfected what she called the “universal accent,” specializing in “island girl” roles, spending her days in low-cut, off-the-shoulder blouses and hoop earrings, prancing shoeless amid palm trees and cane backgrounds in studio photographs.

“I’d talk like this all the time,” she said, demonstrating: “Why you love me no more? Why you like white girl? Why you take gold from my people?”

After the Oscars, she hounded her agent to submit her name for better parts, or to ask producers and directors if they could at least let her read a scene — to no avail. One producer who declined to meet with her, she said, was blunt.

“My agent said, ‘You’re Anita — he just wouldn’t see you,’” she said. “Because it wasn’t a part that was Latina; it was a part that had no nationality at all. That really broke my heart.”

“After ‘West Side Story,’ I couldn’t find work,” she said. “All the Latina roles in films were so perfunctory. And I said, ‘I’m not going to do that stuff anymore with the accents.’”

But in the decades since, she’s remade her career on her own terms, racking up a variety of credits in comedy, television and stage acting, including a new character, Valentina, in Steven Spielberg’s “West Side Story” remake, which was nominated for seven Oscars this year.

She said she was impressed that Tony Kushner, a screenwriter on the film, “turned himself into a pretzel trying to get it right.”

That included the casting of an Afro-Latina actress — Ariana DeBose, who’s up against Moreno for best supporting actress at the Critics Choice Awards on Sunday — as Anita, the role originally played by Moreno.

“I met her during rehearsals and I thought ‘Yay, Steven, you done good, buddy boy,’” Moreno said.

DeBose, who said in an interview last month that Moreno has always been “incredibly supportive,” has also earned an Oscar nomination for best supporting actress this year. If she were to win, she and Moreno would be the third pair of actors to win for playing the same role in different films — and the first women and performers of color to do so.

“I am beyond thrilled that Ariana has been nominated,” Moreno said. “And when she wins, I’m going to burst into tears on behalf of every Hispanic who ever lived.”