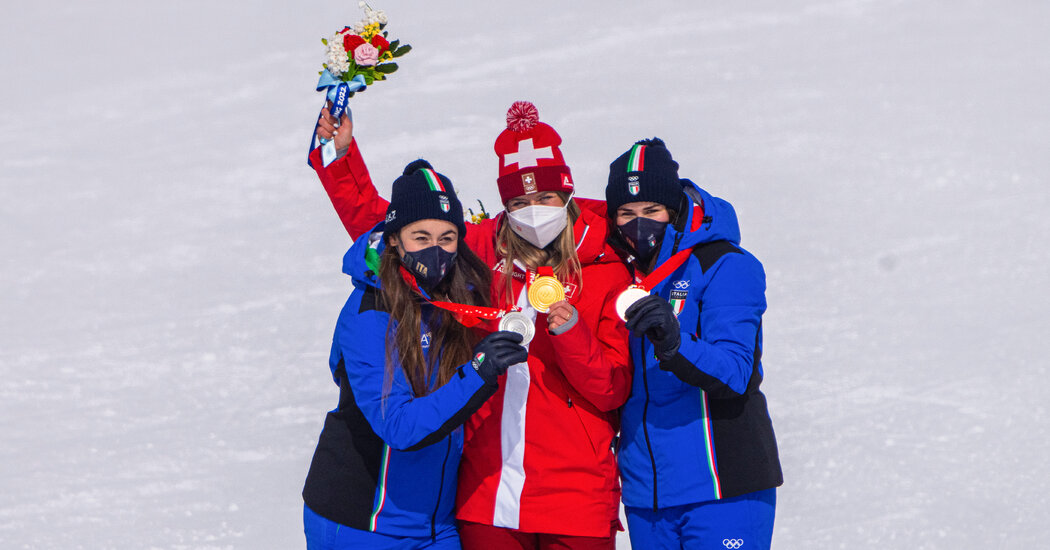 The American team of Joey Mantia, Casey Dawson and Emery Lehman defeated the Netherlands in the B final — effectively the bronze medal race — by almost three seconds. Norway won the gold, for the second Olympics in a row, defeating Russia in the final.

But an unexpected decision potentially cost the United States a chance to race Norway in the final. Mantia, the most accomplished American skater, did not skate in the semifinals against a team from Russia, with Ethan Cepuran chosen instead by the team to race with Dawson and Lehman.

Dawson, Lehman and Cepuran skated well, leading through the middle of the race — their time of 3 minutes 37.05 seconds was faster than the Olympic record (and faster than the Americans skated with Mantia in the B final). But the Russians skated an even better race, and won by almost half a second.

Cepuran and Mantia both said they were only a little bit disappointed by the semifinal loss. “How unlucky do you gotta be that Russia goes four seconds faster in their semi than their final?” Mantia said. “Race of their lives. You can’t really be sad about it. It’s just kind of unlucky.”

The plan was always for Mantia to not skate in the quarterfinals, the team said. Before the semifinals the skaters sat down and talked frankly about how they all felt, and that conversation resulted in Cepuran’s skating in the semifinals instead of Mantia. After the semifinals, Cepuran was more tired than Dawson, who arrived at the Olympics late and was fresher, and so he stepped aside for Mantia.

In the men’s team pursuit, three team members skate in single file only inches apart for eight laps, with the time of the last skater to cross the finish line counted. Usually every lap or two the front skater, who does the grueling work of setting the pace while the others glide in his slipstream, peels to the back and lets a new teammate lead, and suffer.

As a group of individuals, the United States skaters are less accomplished than most of their opponents. None of them had won an Olympic medal before, for example, and besides Mantia, none have come particularly close. Their opponents in the bronze medal race, the Dutch, were led by the nine-time Olympic medalist Sven Kramer and the four-time medalist Patrick Roest.

But the United States has prioritized the team pursuit over the past four years with a bold and innovative strategy that has upended how the race is run. Instead of exchanging the role of who skates up front, the United States has one member lead the entire race, while his teammates use the energy saved to physically push one another forward. The strategy has had success: The Americans set the world record in Salt Lake City in December, and the Norwegians, who won the gold on Tuesday, freely admit to having copied it.

The bronze medal is the first for all the United States skaters, and came in the third, and possibly final, Olympics for Mantia, who is 36. Last week he seemed he seemed resigned to retiring without ever winning an Olympic medal after finishing sixth in the 1,500 meters.

“It’s heartbreaking, you know,” Mantia said at the time. “I really thought that this was my chance.”

It was difficult to be too disappointed, then, after finally winning a medal. “I feel like the weight’s been lifted in a sense,” Mantia said. “I’m an Olympic medalist.”

In the women’s team pursuit, the favored Canadians defeated the Japanese and set a new Olympic record. The Japanese led the entire race, but on the final curve Nana Takagi suddenly lost her balance and fell, handing the gold medal to the Canadians. The Netherlands defeated Russia for the bronze.