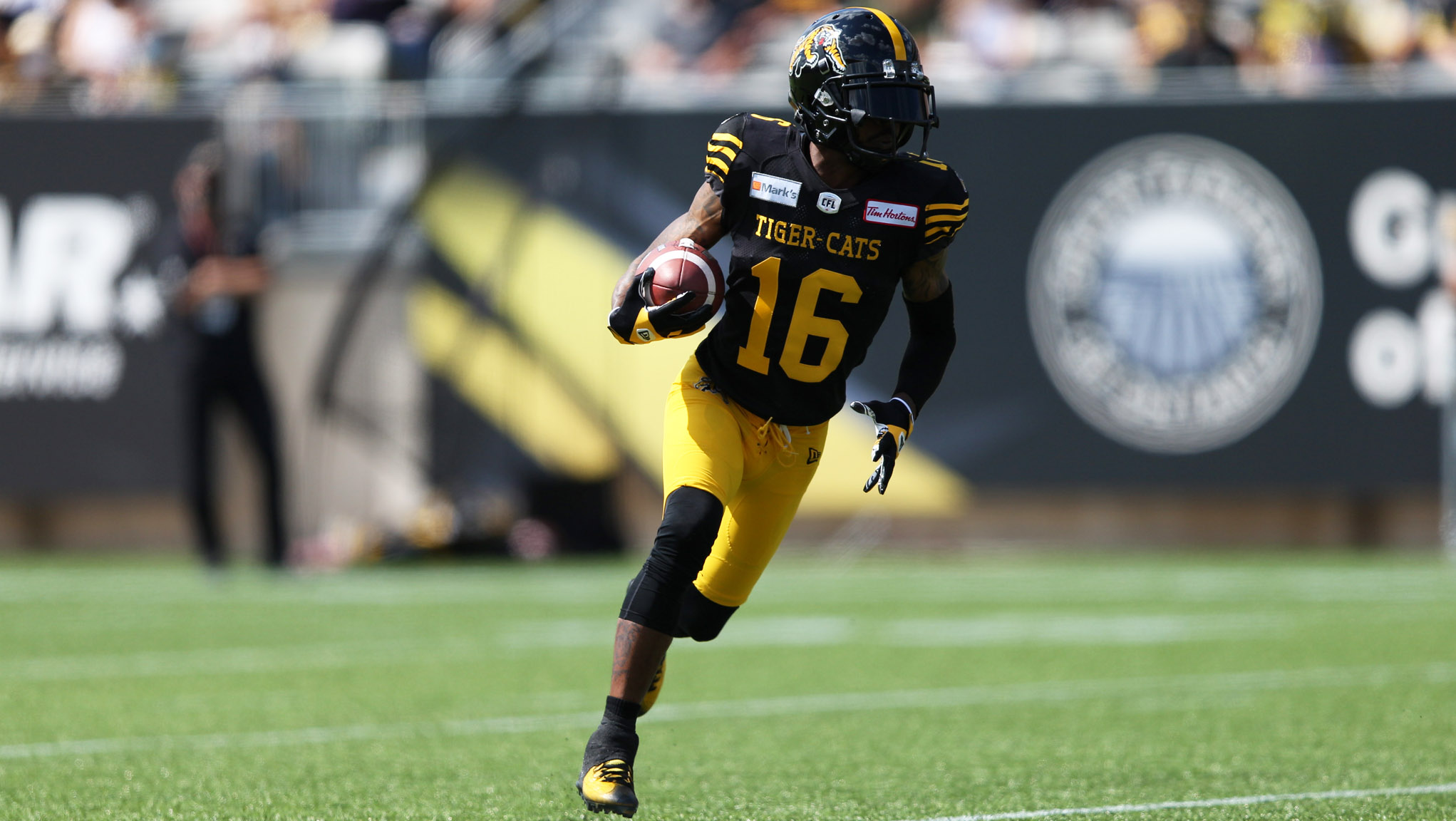 In the first day of free agency, we saw a flurry of activity across the league. Day 2 of free agency has rolled at a slower pace.

That’s allowed us to take stock of Tuesday’s many moves and to spend Wednesday seeing who’s still out there and who could be a good fit with a new team. We took a moment on Tuesday to lament Andrew Harris‘ move and how after five years spent in Winnipeg, you might have come to see him as a player that was synonymous with the Bombers franchise.

Sadly, that doesn’t apply to anyone in sports today. It also brings us to someone that fans across the country — and especially in Hamilton — will be keeping an eye on as the transactions continue to roll in this week.

At the tail end of a down year, Brandon Banks got into form, scoring a pair of touchdowns in the Ticats’ playoff run (Peter Power/CFL.ca)

Brandon Banks has spent all eight years of his career with the Tiger-Cats. The team announced they’d mutually parted ways with Banks on Jan. 27, leaving the ball in his court as to what his next moves might be.

There’s no question that Banks could add something to a team that’s got its eyes on the Grey Cup. While he did have a down year in 2021, with 44 catches for 474 yards and a pair of touchdowns, he turned his performance up as the season moved along. In the playoffs, Banks had 153 yards through three games, with two touchdowns, including a big one in the Grey Cup game. He’s still a threat in the return game as well and you’d have to think Banks’ fit with a new team would be one where he could play a smaller role in the offence than he’s been used to, with a few reps on special teams, just to keep opponents guessing.

Let’s stick with (now technically former) Ticats for a moment and look at a player that could bring a lot to their team in 2022. Frankie Williams was a dynamo for the Ticats last season, emerging as the team’s primary returner and a stellar defensive back that was capable of finding the end zone from either position.

The 28-year-old had 25 tackles and an interception last season and added a punt return TD for the Ticats in just eight games. He thrived working with defensive coordinator Mark Washington and special teams coordinator Jeff Reinebold in Hamilton. From a special teams standpoint, a pairing with Craig Dickenson in Saskatchewan could be very interesting, as would getting to play for Riders’ DC Jason Shivers. And as tough as it may be to think about from a competitive perspective, given the clubs’ recent history, working with Bombers head coach Mike O’Shea and special teams coordinator Paul Boudreau might be a nice fit for Williams, too.

Finding his place in a talent-heavy roster in Toronto last year, Ricky Collins Jr. had 634 receiving yards (The Canadian Press)

Ricky Collins Jr. had 632 receiving yards for the Argos in 2021 and as he showed in the 2019 season when he went for a career-best 1,103 yards in Edmonton, is capable of much more. The 29-year-old has, as this is being written, made it through the first two days of free agency without finding a taker for his services yet and could certainly help a team this coming year.

Kenny Stafford is another receiver that’s still out there, after putting up good numbers (17 catches for 242 yards and three touchdowns in seven games) on an Ottawa team that went through a lot of young quarterbacks in the second half of its season.

Stafford will be 32 at the start of the season and would provide a good veteran role player for any team. He did that in Ottawa, but given the hole the team was in by the time he got there, it’d be nice to see him on a team that’s playoff-bound this year.

Jumping back to the defensive side of the ball, Trumaine Washington seems like someone who might fall into that sneaky good signing category when we get closer to training camps. The 26-year-old DB tied for the league-lead in interceptions, with five this past season in Edmonton. That came after showing promise for the previous two seasons in Toronto. With a full 18-game season and the right defensive coordinator, Washington could take a big step in his career.