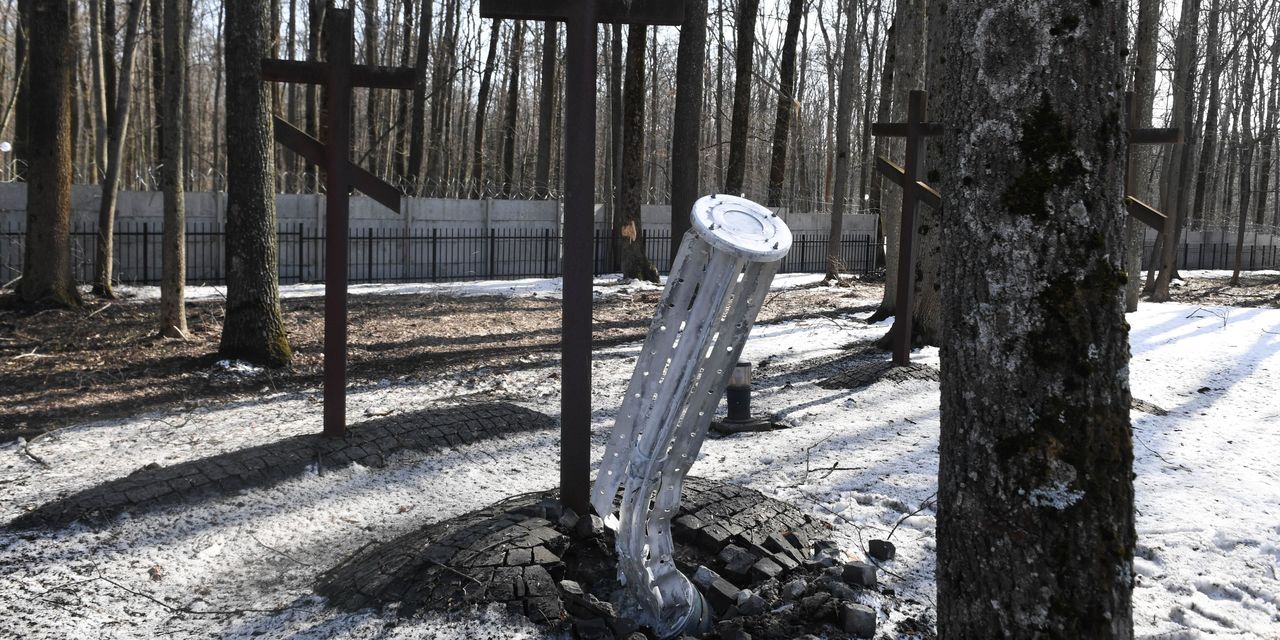 NATO estimated Russia has lost as much as one-fifth of its combat forces sent to Ukraine in about a month of fighting as President Biden and alliance leaders gathered in Brussels for a summit to discuss providing further support to Kyiv to repel the Russian invasion.

Between 7,000 and 15,000 Russian soldiers have been killed in Ukraine and up to 40,000 Russian troops in total have been killed, wounded, taken prisoner or are missing, said a senior military official from the North Atlantic Treaty Organization. Russia may also have lost 10% of its equipment, impairing Moscow’s ability to maintain its pace of operations, said another NATO official.

The casualty count would underscore how much Russia’s attack on Ukraine that began Feb. 24 has become bogged down after what defense analysts have said have been a series of operational missteps. Ukrainian defensive operations have emerged as far-tougher and enduring than was expected.

U.S. estimates of Russian casualties were “not that high,” a senior U.S. defense official told reporters Wednesday, referring to the NATO estimates, but declined to provide an alternative figure. Some U.S. officials have estimated in recent days that up to 7,000 Russian troops have been killed.

NATO officials on Thursday are expected to further ratchet up the pressure on Russia when alliance leaders meet in Brussels. “We are determined to do all we can to support Ukraine,” NATO Secretary-General

said Wednesday. “I expect allies will agree to provide additional support, including cybersecurity assistance, as well as equipment to help Ukraine protect against chemical, biological and radiological and nuclear threats.”

is betting that the NATO summit, to be followed by a meeting of the Group of Seven and then European Union leaders, will yield help for his country and sanctions on Russia. “Three important summits this week: the G-7, NATO and the EU. New sanctions packages, new aid,” Mr. Zelensky said overnight. He is scheduled to join each of the meetings virtually.

Secretary of State Antony Blinken cited reports of indiscriminate attacks on Ukrainian civilians in concluding that Russian forces had committed war crimes. The move will formalize investigations into alleged atrocities.

Russia said Wednesday it was expelling more American diplomats in response to a U.S. move to remove Russian staff assigned to the United Nations in New York earlier this year.

said. “Kyiv is hopeful Beijing will play a more prominent role in bringing this war to an end,” he tweeted.

said Beijing is maintaining communication with relevant parties on the Ukrainian situation. “China will continue to play a constructive role in promoting the easing of the situation in Ukraine,” Mr. Wang said Wednesday.

NATO’s Mr. Stoltenberg criticized China for failing to condemn Moscow’s attack on its neighbor and for helping spread some of the Kremlin’s messages around the conflict. He said NATO officials are concerned China could provide material support to Russia in the war and called on Beijing to help bring about a peaceful end to the fighting.

The Chinese Embassy in Brussels didn’t respond to a request for comment.

The United Kingdom, meanwhile, is expected to announce Thursday that it would provide 6,000 new defensive missiles and £25 million, the equivalent of about $33 million, to pay Ukraine’s armed forces, the prime minister’s office said.

Talks between the Russian and Ukrainian sides have been taking place virtually daily, with little sign of progress. Mr. Zelensky said talks are “very difficult. Sometimes scandalous. But step by step we are moving forward.”

on Wednesday said talks with Kyiv were difficult, accusing the Ukrainian side of changing its negotiating position. Moscow wasn’t opposed to Western mediation in the negotiations with Ukraine, but Russia has clear red lines, Mr. Lavrov said, according to state newswire TASS. The two sides are set to meet again Thursday, TASS said.

Mr. Lavrov accused the West of looking to keep Russia engaged in hostilities for as long as possible by continuing to pump weapons into Ukraine. The U.S. and others have shipped arms and humanitarian assistance to Ukraine to help Kyiv fight off the Russian attack, allowing the defenders exact a heavy toll on the invading military.

Moscow hasn’t released updated casualty figures since acknowledging on March 2 the deaths of 498 troops in Ukraine.

said Wednesday the Russian Defense Ministry will provide additional information on Russian losses “when they see fit…The operation is developing and being carried out strictly in accordance with the plans and tasks.”

on Tuesday said there were signs of progress on the diplomatic front. “There is enough on the table to cease hostilities—now…and seriously negotiate—now.” He called the war unwinnable, adding: “Sooner or later, it will have to move from the battlefield to the peace table.”

Mr. Zelensky has said he wants Western security guarantees as part of any agreement with Moscow. Russia, which has demanded Ukraine remain neutral, has pushed back on any NATO involvement in Ukraine. Mr. Peskov said that bringing NATO peacekeepers into Ukraine “would be a very reckless and extremely dangerous decision.”

Mr. Biden, after leaving Brussels on Friday, heads to Poland, in part to discuss the refugee situation there, with more than two million people having crossed the border from Ukraine over the past month to escape the fighting. Poland has been by far the largest recipient of refugees fleeing Ukraine, with more than 2.1 million people, mostly women and children, the United Nations said.

The president’s trip unfolds as the humanitarian situation in some of Ukraine’s beleaguered cities worsened. The southern port city of Mariupol has been particularly devastated, with Russian and Ukrainian forces locked in street-by-street warfare through the city’s downtown, as Moscow’s airstrikes gutted entire neighborhoods in its bid to take its first major urban center since launching its assault a month ago.

Hundreds of people from Mariupol now arrive daily in Zaporizhzhia, about 150 miles to the northwest. They are fleeing in cars that show the scars of the conflict, arriving with shattered windshields and shrapnel damage.

Those left behind, about 100,000 people, are under constant shelling, “in a complete blockade” without food, water or medicine, said Mr. Zelensky, adding that violence is disrupting humanitarian efforts. Just over 7,000 people were able to flee the city Tuesday, he said, part of the more than 10 million people the U.N. says have been uprooted by the fighting, with more than 3.6 million crossing the border into neighboring countries and the rest displaced internally.

The fighting around Mariupol has been under way since the opening days of Russia’s assault, but the city has seen stepped-up levels of attack for about the past two weeks as the battle moved closer.

“For more than two weeks, Mariupol has been encircled by the Russian army and relentlessly bombed, shelled and attacked. For what? Even if Mariupol falls, Ukraine cannot be conquered city by city, street by street, house by house,” the U.N. chief said.

Much of Mariupol’s population remains trapped in the city, subjected to intensifying shelling, Mariupol Mayor

said. “If previously only two planes were flying, now it’s five,” he said. “If there was only one ship approaching before, now there are four ships approaching. Also, there’s street fighting, including tanks, like in a bad dream from World War II.”

Many residents are fleeing the city by foot, Mr. Boichenko said, only to be blocked in the town of Manhush and outlying villages on the road to Berdyansk by armed men from the self-proclaimed Donetsk People’s Republic, a part of Ukraine occupied by Russia since 2014.

Ukraine’s military said it was fighting to hold back Russian attacks across a range of locations, including Mariupol. Kyiv took further shelling overnight, local officials there said.

For weeks, Moscow’s offensive against Ukraine’s capital has stalled at the edge of the city and Russian troops, who approached from the north, have hunkered down in outlying suburbs. Rather than attack the city, they have tried to inch their way around it and cut off its defenders.

That encirclement has been unsuccessful and Ukraine has been able to keep some southern roads into Kyiv open, said

a military analyst and reserve colonel in the Ukrainian army.

In the past few days, Ukraine has been mounting a counterattack, he added, with Ukrainian forces attacking Russian troops north of Kyiv from the rear, in a wide pincer movement that could cut them off from the Russian border.

“Ukraine is now encircling the enemy that tried to encircle Kyiv,” he said.

Write to Daniel Michaels at daniel.michaels@wsj.com, Isabel Coles at isabel.coles@wsj.com and Georgi Kantchev at georgi.kantchev@wsj.com