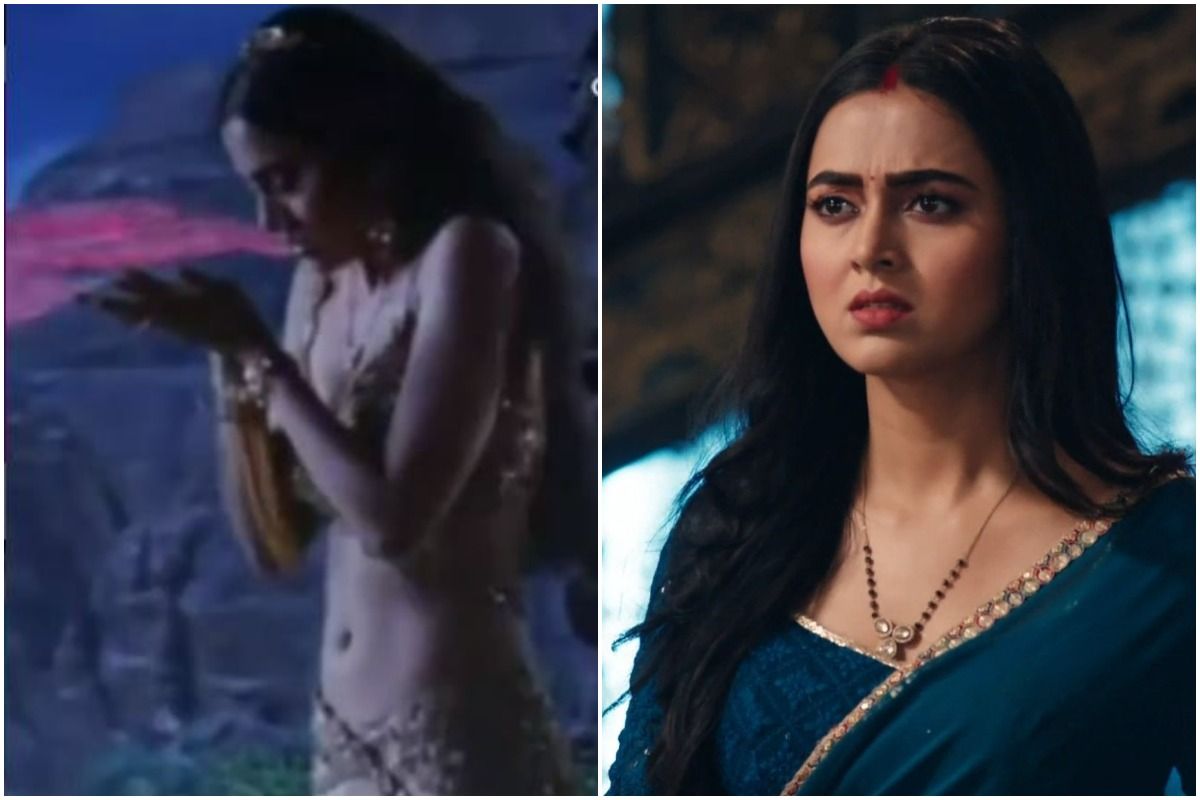 Naagin 6, May 8, Written Episode: The episode continues with Rishabh’s father narrating to Pratha aka Tejasswi Prakash and Mehek (Mahekk Chahal) about the reality of Seema (Sudha Chandran) and her mother Tara. He tells them how they betrayed Pratha’s grandmother Sheshnagin and killed her to get Amrit Kalash. Unborn Pratha’s pregnant mother had hidden the Kalash in the jungle which was known only to Chanda who had witnessed the battle between Tara and Pratha’s Nani. Check out this post on Naagin 6:Also Read – TejRan Secrets Revealed: Karan Calls Tejasswi Good Kisser, Says ‘She Likes to be on Top!’

Seema Tries to Kill Her Husband!

Pratha and Mehek get to know that in 7 days the Asurs are planning a big attack on India on Kaal Raatri. They have to find the kalash and prevent the attack. Rishabh’s father tries to tell him Seema’s truth but Maha Asur has already played the cards and lied to Rishabh. Rishabh doesn’t believe in his Dad and asks him to surrender. As Rishabh’s father tells him to listen otherwise he’ll jump from the terrace, Maha Asur pushes him from behind. Rishabh’s father falls down but is taken to hospital and his life is saved. Also Read – Lock Upp Finale: Saisha Shinde Gets Evicted; Fans Hail Munawar Faruqui For The Win – Watch Video

As Rehan is partying with cousins he badmouths about Pratha. Samaira gets angry and slaps him. Samaira comes home and tells Pratha Rehan is a flirt and she made a mistake marrying him. Pratha tells Samaira to be careful and not let him realize that Samaira knows about him. Rehan later finds Samaira alone and tries to force himself on her as he seeks revenge from her for slapping him in front of his cousins.

When Pratha tries to remind Chanda about the Amrit Kalash Seema appears in the scene and tells everyone about a surprise. Rainaksh aka Zeeshan Khan enters the scene who claims to be Chanda’s son. After convincing Chanda he tries to take her home. But Pratha and Rishabh insist them to stay for sometime. While walking with Rishabh’s mother Rainaksh’s elbow touched Mehek’s hand and she gets a burn. Hwen Pratha tries to enter Chanda’s room secretly Rainaksh stops her revealing his true identity. He is none other than an Isdhadhaari Nevla (mongoose).

In the upcoming episode Pratha tells Mehek she’ll do something that will bring Chanda’s memory back. Maha Asur tells Sheshnagin that Nevla will never let her get the Amrit Kalash. Pratha tells Mehek Nevla may be stronger than Naagin but Naagin has got the intelligence over the mongoose.

For more updates on Naagin 6 check out this space at India.com.