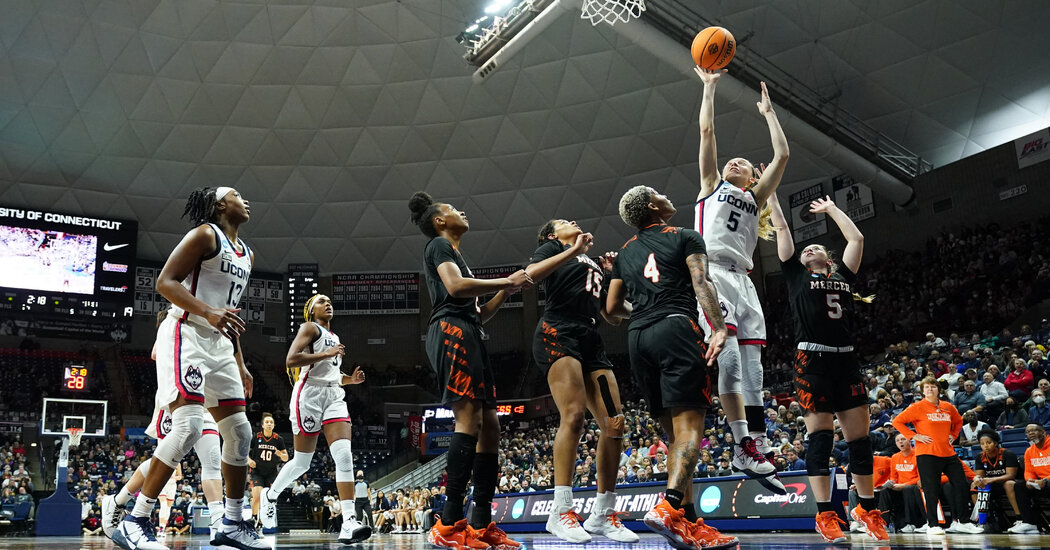 After Arizona handed Connecticut a humbling loss in last season’s Final Four, Geno Auriemma, the Huskies’ head coach, was blunt about his team’s level of maturity.

“When we’re high and when we’re on top of the world, we think everything’s great,” Auriemma said at the time. “And when things don’t go our way, there’s a pouty-ness about us. There’s a feeling sorry for ourselves about us that you don’t win championships when you’re like that unless you get lucky.”

Before Connecticut’s convincing 83-38 win over 15th-seeded Mercer in the first round of the tournament on Saturday, Auriemma said that his team was more experienced and more complete than it was last year, but that the Huskies, a No. 2 seed, had not yet faced enough adversity to measure how much they had matured.

Despite Mercer’s best efforts in the first quarter to keep the game close, Connecticut scored with ease with a balanced offensive attack, made easy buckets in transition and used its height advantage to dominate on offense and defense.

Paige Bueckers, the reigning national player of the year, had been playing limited minutes while recovering from an anterior tibial plateau fracture and lateral meniscus tear in her left knee in December. Bueckers, who has averaged about 14 minutes per game since the injury, was aggressive on offense and active on defense Saturday. She finished with 12 points, 4 rebounds and 5 assists in 25 minutes.

Christyn Williams, the Huskies’ leading scorer with 14.6 points per game, led the team with 13 points.

One of the Huskies’ biggest strengths during their 10-game winning streak has been defense, which has improved after a handful of players missed games with various injuries.

The Huskies struggled at times this season, but many believe their depth and defense could be enough to hoist the championship trophy and atone for several seasons of disappointing finishes — disappointing, at least, by their standards.

For the third time in N.C.A.A. women’s tournament history, an Ivy League team has won a game. For the second time, that team is Princeton.

The Tigers managed a win for the first time since 2015 as a No. 11 seed, despite competing against a nominally formidable opponent: a sixth-seeded Kentucky team that had just upset the best team in the country, South Carolina, to win the Southeastern Conference tournament.

Dive Deeper Into the N.C.A.A. Tournaments

The Tigers took over early in their game on Saturday, though, thanks in large part to the fearless play of senior guard Abby Meyers, who finished with 29 points. Meyers and her fellow guard Kaitlyn Chen set the pace, executing graceful fakes and muscling past a Kentucky team that seemed to be perennially looking for foul calls that never came.

Rhyne Howard, Kentucky’s best player and a projected first-round W.N.B.A. draft pick, tried to respond but her efforts were futile. She made just 4 of her 14 attempts from the field, and along with her teammates looked generally bewildered by the Tigers’ defense. Dre’una Edwards, who hit the buzzer-beater shot that won Kentucky its conference title, finished the game with 16 points and 12 rebounds.

Though Princeton never had a double-digit lead, it found ways to respond every time it looked like Kentucky might have found a little momentum. Meyers’s 3-point shot halfway through the fourth quarter, a quick response to a fast-break basket by Edwards, effectively iced the game.

Princeton will face No. 3 seed Indiana on Monday as it competes for its first win in the tournament’s round of 32.

Maddy Siegrist averaged 25 points per game this season, and that’s exactly what the nation’s second-leading scorer posted as she led No. 11 Villanova to a win over No. 6 Brigham Young.

Siegrist, a 6-foot-1 junior, was responsible for every field goal the Wildcats made in the final seven minutes of the game, as well as most of the free throws that sealed their victory.

“The ball is certainly going to fall in Maddy’s hands,” said Villanova Coach Denise Dillon. “Down the stretch, we were looking for her to make plays for us.”

The Cougars entered the tournament with just three losses, including a surprise defeat by Gonzaga in the title game of the West Coast Conference tournament. No. 9 seed Gonzaga advanced to the second round on Friday after beating Nebraska.

B.Y.U. contained Villanova early, rushing out to a double-digit lead in the first quarter. After that, both teams traded the lead until the very end. The Cougars got within 1 point of the Wildcats with 26 seconds left in the game, but couldn’t convert any potential game-winning shots. Siegrist also blocked a late 3-point shot attempt.

“I couldn’t give up any 3s to No. 10,” Siegrist said afterward about that crucial block against Tegan Graham. “She already hit one in my face, she wasn’t going to get a 3 off.”

Villanova held Shaylee Gonzales, the West Coast Conference player of the year, to just 8 points, less than half of her season average. She managed to make eight assists, but was still relatively quiet in what looked at the outset like a matchup between two stars.

Siegrist looked poised, despite the fact that this was her first career N.C.A.A. tournament game. Some experience came from Brianna Herlihy, who led the Wildcats with nine rebounds.

N.C. State left no doubt about its prowess.

The Wolfpack spread the wealth: Eleven different players scored for North Carolina State and five of them reached double figures, including Raina Perez, who led the team with 16 points, as well as Diamond Johnson and Jakia Brown-Turner. Freshman Aziaha James made her court appearance in the fourth quarter with a splash, faking a pass then making a layup that drew the home crowd to their feet.

Naz Hillmon made a statement in just three quarters of No. 3-seeded Michigan’s blowout 74-39 win over American.

Michigan’s first-ever Associated Press all-American proved why she deserved that award with a nearly flawless performance in the Wolverines’ first game of the tournament. Hillmon put on a show for the home crowd in Ann Arbor, scoring 24 points in 25 minutes on the floor while gathering 11 rebounds. It was her 49th career double-double.

Hillmon was named the Big Ten player of the year last season, and this season she was neck and neck with Iowa’s Caitlin Clark for the title. Though Clark prevailed, Hillmon has had a commanding senior season, scoring quickly and gracefully from the midrange and below the basket while playing with impressive urgency on the defensive end of the court.

This year’s tournament is her second showcase on the national stage before she enters the W.N.B.A. draft this spring, where she is projected to be a first-round pick. Last year, Hillmon led Michigan to the round of 16 for the first time in program history. She played with even more confidence and efficiency in Saturday’s opening game.

In her last tournament run, Hillmon never cracked 20 points in a game. Against American, she made 11 of her 14 shots — and two of those misses came late in the third quarter, when the game was already far out of reach for the Eagles. Even when she wasn’t padding her numbers in the box score, Hillmon was creating opportunities for her teammates, setting screens and drawing defenders.

On Monday, she’ll face off with Villanova’s Maddy Siegrist — another top-tier player who had an impressive opening game.

The coronavirus pandemic may have delayed the postseason ambitions of Ayoka Lee, Kansas State’s 6-foot-6 center, for two years, but no longer. Lee and the ninth-seeded Wildcats outlasted No. 8-seeded Washington State in a hard-fought defensive battle, winning 50-40 and denying the Cougars their first tournament win in program history.

Washington State was up seven points at halftime, a lead that seemed substantial given that the score was just 24-17. Lee had made a single field goal, while Washington State’s Leger-Walker sisters, Krystal and Charlisse, had combined for 19 points. Both crafty guards, the New Zealand natives appeared in control early and capitalized on the Wildcats’ slow pace.

But trying to contain Lee had gotten the Cougars into foul trouble, and so gradually she was able to help Kansas State get in control of the pace and the scoreboard. Her deft rebounding and quick release near the basket make her an imposing threat to any team that allows her to get position inside. The Cougars’ center Bella Murekatete, who typically averages 10 points and seven rebounds per game, was held scoreless and grabbed just three rebounds.

The matchup was so low-scoring that once the Wildcats were more than five points ahead, the game felt all but over.

“When shots weren’t falling, we dug deep,” Kansas State Coach Jeff Mittie after the game. “That’s something that this team has learned: Not to tie their defense to their offense. We’re moving on because of that.”

Lee finished the game with 20 points and 15 rebounds, numbers that offer a glimpse of the kind of authoritative play she is capable of — and that the Wildcats will need as they try to make it to the round of 16 for the first time in 20 years.

No. 7 seed Central Florida got its first N.C.A.A. tournament win.

In their seventh trip to the N.C.A.A. tournament, the seventh-seeded Knights of Central Florida finally earned their very first win, a decisive 69-52 victory over in-state opponents Florida.

Though they were the higher seed with Florida seeded No. 10, the game still had the feel of an underdog’s triumph considering Florida’s position in the dominant Southeastern Conference and the Knights’ dismal tournament record.

Central Florida has lost just three games this season, and this win extends their current streak to 14. The Knights have earned those wins mostly on defense, allowing an average of just 47.6 points per game — the least in the country.

In this win, though, their offense shone. The Knights took control early and rarely let the Gators, who were playing without their injured leading scorer, Kiara Smith, come within striking distance. Senior forward Brittney Smith led the team with 25 points off the bench, and made 11 of her 15 shots. Senior Diamond Battles and fifth year senior Masseny Kaba rounded out Central Florida’s experienced offense, scoring easily around the basket and from midrange (the Knights made just two 3-point shots).

Central Florida will be rewarded for their first program win with an unenviable challenge: none other than Connecticut will be their second round opponent as they try to move on to Bridgeport, Conn., in the round of 16.