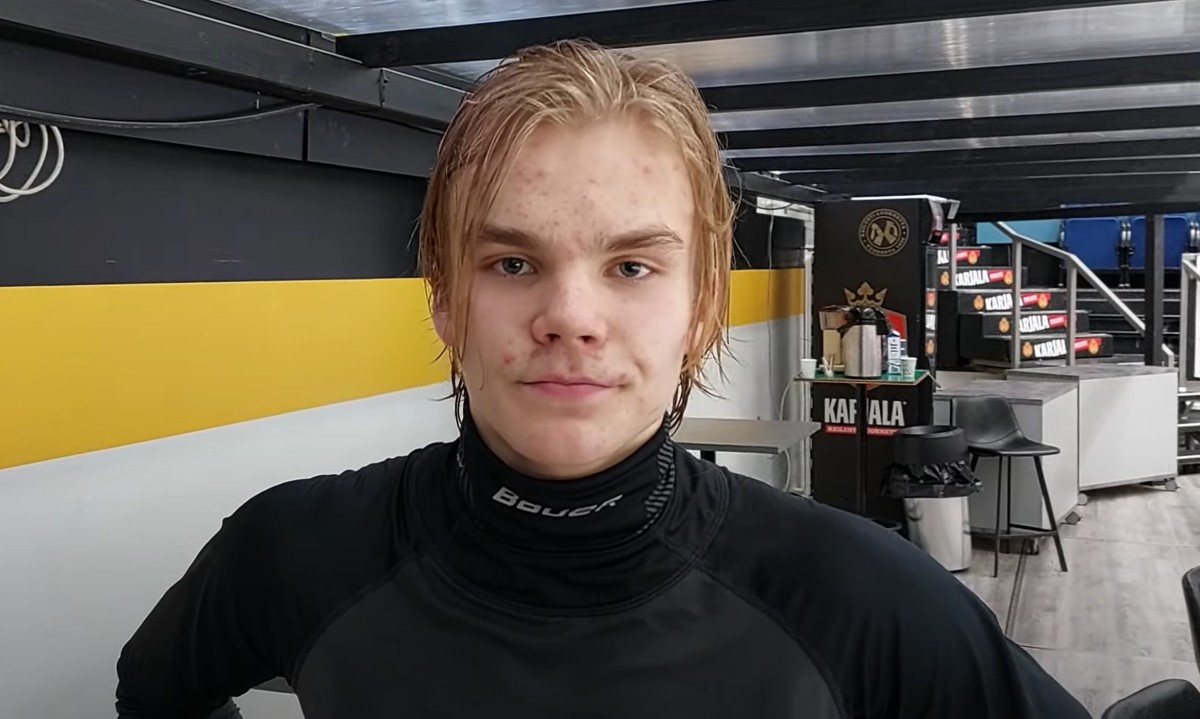 But at the World Under-18 Hockey Championship, which opened today in Germany, Finnish defender Aron Kiviharju is already making a name for himself. He’s been playing above his age group for years now, but what he’s done at the U-20 level in Finland has been record-setting for a U-16 player.

Kiviharju’s calling card as a prospect has been the fact that no matter how many years behind he is on his birth certificate, he has been a step ahead of the competition. He was playing U-16 hockey as a 13-year-old and finished in the top five in U-20 defensive scoring as a 15-year-old. Heck, his numbers would be great for a forward, let alone a defender.

Everything in Kiviharju’s game comes from his ability to process the game at a level unseen from almost any player at the U-20 level. Playing within the TPS program, Kiviharju earned an “A” on his jersey, and it’s something that can’t be ignored.

“Physically he looks like most 15-year-olds but he plays with the maturity of a 20-year-old who has multiple years of experience in the league. He’s very creative and deceptive, the type that pulls you out of your seat,” a European-based NHL scout said when asked about Kiviharju. “He plays on his instincts, his hockey sense is through the roof. His edgework and four-way mobility are already high-end. Just wait until his physical maturity catches up.”

That maturity and mobility are the base of his game in all three zones. Kiviharju displays excellent footwork with and without the puck. Kiviharju showcases the ability to cut into space at will or walk the blueline as if he were a veteran in the league. Kiviharju’s ability to work off his edges and utilize his crossovers to open the ice surface up to him through the neutral zone.

This mobility helps him defensively as well. Kiviharju will bait forecheckers and evade pressure on puck retrievals. His escapability below his own goal line seems effortless at times, leaving a forechecker behind while Kiviharju’s eyes are up ice, looking to identify the best route towards moving the puck up ice.

Kiviharju’s 30 points in 35 games this season trails only Patrik Laine as a U-16 scorer in the history of the U-20 SM-sarja. The Finnish defenseman has outproduced forwards such as Alexander Barkov, Jesse Puljujärvi, and Jesperi Kotkaniemi. Only 10 U=16 players all-time have played more than 20 games, and he’s one of four to get into 30 or more contests.

The scary part about Kiviharju’s offensive game is that it feels incomplete still. There is a killer instinct that he displays in short flashes that isn’t there on a consistent basis quite yet. Kiviharju has the skill and mobility to assert himself in the offensive zone a bit more still. Instead of making the move to create space for himself at the blueline and then making a slick pass, he could attack that space and generate a scoring chance for himself the way a Cale Makar or Roman Josi do every night in the NHL.

Kiviharju still struggles in terms of raw strength along the boards in his own end at times, but he’s smart enough to get himself out of trouble. Kiviharju has an excellent stick in passing lanes and jumps at the chance to cut off play. Kiviharju still plays a very skill-based, anticipatory game in his own end as he stands just 5-foot-10 and 157 pounds, but the room to grow into a physical presence with the mindset and skill-focused defense that he plays could very well make him a better all-round defender who can’t be attacked in one manner or another.

There is so much room for Kiviharju to grow still yet he already displays so many aspects of a mature, well-rounded game at such a young age. The 2024 NHL draft-eligible defenseman will be asked to showcase exactly why the hype is warranted at the World Under-18s. On talent alone, he should be one of Finland’s most important players on the back end.

“If he gets the usage he deserves, he could be Finland’s top defenseman and one of the best in the tournament,” an Eastern conference NHL scout noted.

There shouldn’t be a reason for Finland to not play Kiviharju in a pivotal role. He has the ability to play on the power play and drive play at five-on-five in a U-18 tournament, having done so against U-20 competition all season long.