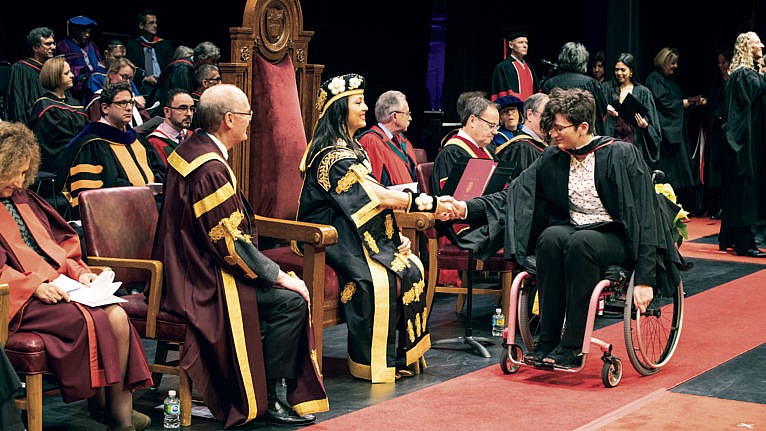 An insider’s guide to the best place to live, campus food and more

Why did you choose McMaster?
The first reason was the university was closer to home. I was deciding between McMaster and Carleton in Ottawa; Mac was an hour-and-a-half away whereas Carleton was about five hours away. The second reason was McMaster’s facilities seemed better suited to my needs. At the time, I was going into music, and McMaster had just built a brand new building; the basement had 14 piano practice rooms. The modernity of the campus was a huge selling factor.

Describe some of your best experiences so far.
When I was going into my second year, my elementary school music teacher, who is a McMaster alumnus, told me to look into the school newspaper. He was a part of it in the 1990s. I volunteered to write articles and then was hired on staff. This thing was the best I’ve ever done at university. Not only did I meet a group of amazing people, but I was able to learn more about the city I lived in.

Are you involved in extracurricular activities?
In my first year, I decided not to join anything and I think I socially suffered. Afterward, I made sure to join anything that felt like a fit for me: the campus newspaper, a show choir, my department’s student society and an academic journal. These experiences taught me so much about myself and what I was capable of.

What do you think of your professors?
I switched programs at the end of my first year. I wasn’t jibing with the program—that’s okay, not everybody likes what they first apply to. When I switched into my new program, the profs were insightful, always accommodating and ready to talk to you about the material. Most importantly, you were more than just a number to them. Things became so much easier when I was having a rough time with content or mental health.

What do you think of the school’s administration?
I think you’ll find this at any Ontario university: they don’t hold your hand when it comes to figuring out how to enrol or drop courses. I suggest that you actively be in contact with your academic adviser; I cannot stress this enough. They are supposed to help you make decisions in your best interest, so do not be afraid to ask them questions if something doesn’t make sense to you.

What is off-campus life like in Hamilton?
In a non-pandemic year, Hamilton offers a lot of scenic trails and cool nightlife: lots of different clubs, drag shows and events. Also super cool: Hamilton has a ghost walk since it was heavily involved in the War of 1812.

If I wrote the school motto: ‘McMaster University: We send you a lot of emails but don’t understand why you don’t read them all’
Best place to live: On campus, the Peter George Centre for Living and Learning; off-campus, the Westdale area
Best place to study: Atrium of the Michael DeGroote Centre for Learning and Discovery
Best campus events: Light Up the Night in April
Weirdest tradition: Fake homecoming (FOCO)
Best campus food: The Phoenix CraftHouse & Grill
Best cheap lunch: Down the street at Fortinos; they offer Roman pizza—the stuff is to die for
Best pizza: See above
Best place for a fancy dinner: Trek down to King William Street in downtown Hamilton
Best giveaway: 64-GB iPad a few years ago
Best bar for hanging out: The Snooty Fox in Westdale
Best live music venue: Corktown Irish Pub
Best hangover breakfast: Motel on Barton Street (that’s the actual name of the restaurant)
Best place for a nap: Nothing beats your own bed
Best weekend activity: Walk the trails of Cootes Paradise right behind campus
The thing that surprised me most about the school: The willingness of people to go out of their way to help you
If I could change one thing about the school: I wish it had cheaper food options