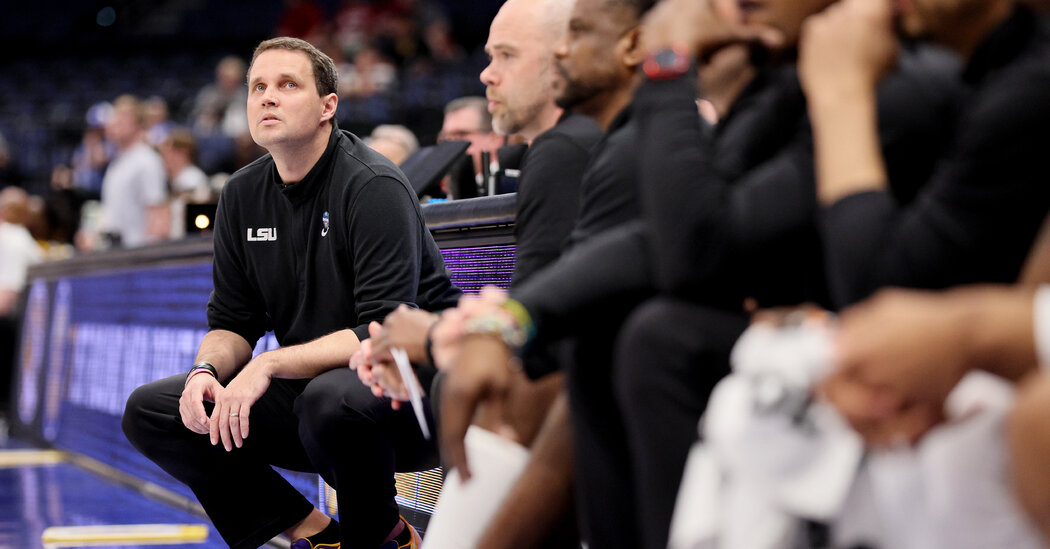 Louisiana State abruptly fired men’s basketball coach Will Wade on Saturday, less than a week after the school received a notice of allegations from the N.C.A.A. that accused Wade of five major rules violations, including making cash payments and job offers to help lure a recruit to the school.

Wade and his associate head coach, Bill Armstrong, were dismissed one day after the Tigers lost to Arkansas in the Southeastern Conference tournament quarterfinals. An assistant coach, Kevin Nickelberry will coach the team, which is 22-11 overall, in the N.C.A.A. tournament, whose pairings will be announced on Sunday.

Wade had been under scrutiny for about three years, since Yahoo reported in 2019 that federal agents had recorded Wade in a wiretapped call discussing making “a strong-ass offer” to Javonte Smart, a decorated high school player from Baton Rouge, La.

Wade was suspended for the Tigers’ postseason games in 2019 over his refusal to cooperate with L.S.U. officials, but was reinstated a month later after he met with administrators and agreed to an addendum to his contract that would allow the school to fire him with cause if he was found to have committed Level I or Level II violations, the most serious offenses.

The notice of allegations also says Wade obstructed the investigation by refusing to turn over thousands of records, and that in three interviews with investigators he knowingly provided false or misleading information.

Wade said during the S.E.C. tournament that he could not comment on the N.C.A.A.’s allegations. “I certainly look forward to commenting when it’s all over, but until then, they won’t allow us to comment,” he said.

The recorded call was part of a federal investigation that prosecutors, when they announced indictments in 2017, said would expose the shady world of college basketball recruiting.

Ultimately, it was mostly assistant coaches and low-level associates who paid the price in the criminal justice system. Assistant coaches at Southern California, Auburn, Oklahoma State and Arizona were convicted in a bribery scheme, as were two shoe company associates and an aspiring agent. Other schools that were investigated included Kansas, Louisville and North Carolina State.

Wade is the first head coach to be fired following a direct accusation by the N.C.A.A. in the scheme. Rick Pitino was ousted almost immediately at Louisville, where the accusations that he had approved payments to a recruit — which Pitino has denied — were the last in a series of embarrassing indiscretions there. And Sean Miller was fired at Arizona last year with one year remaining on his contract amid his team’s declining performance and an N.C.A.A. investigation.

In announcing Wade’s firing, University President William F. Tate IV and Athletic Director Scott Woodward noted that the university and the men’s basketball program “have operated under an exhausting shroud of negativity.”

Their statement also said the decision to fire Wade and Armstrong is not an acknowledgment of agreement with any of the allegations, to which the school is in the process of responding.

However, this is only the latest scandal at the school.

Included with the recent men’s basketball accusations by the N.C.A.A. are also allegations that a booster paid $180,000 to the father of a former football player for a sham job, and that former L.S.U. star Odell Beckham Jr., provided approximately $2,000 in cash to players after they had won the national championship game in 2020.

The allegations against Wade and Armstrong are more wide-ranging and systematic. They include:

Smart played three seasons for L.S.U., leaving a year ago to enter the N.B.A. draft. He was undrafted but last month signed a two-way contract with the Miami Heat.

Wade, 39, coached at L.S.U. for five seasons after previous stints at Chattanooga and Virginia Commonwealth. His best team was in 2019, when L.S.U. finished 28-7 and won the S.E.C. regular season championship with four players who have gone on to play in the N.B.A.

But those Tigers finished their season in the N.C.A.A. tournament without their head coach — just as this year’s team will have to do.