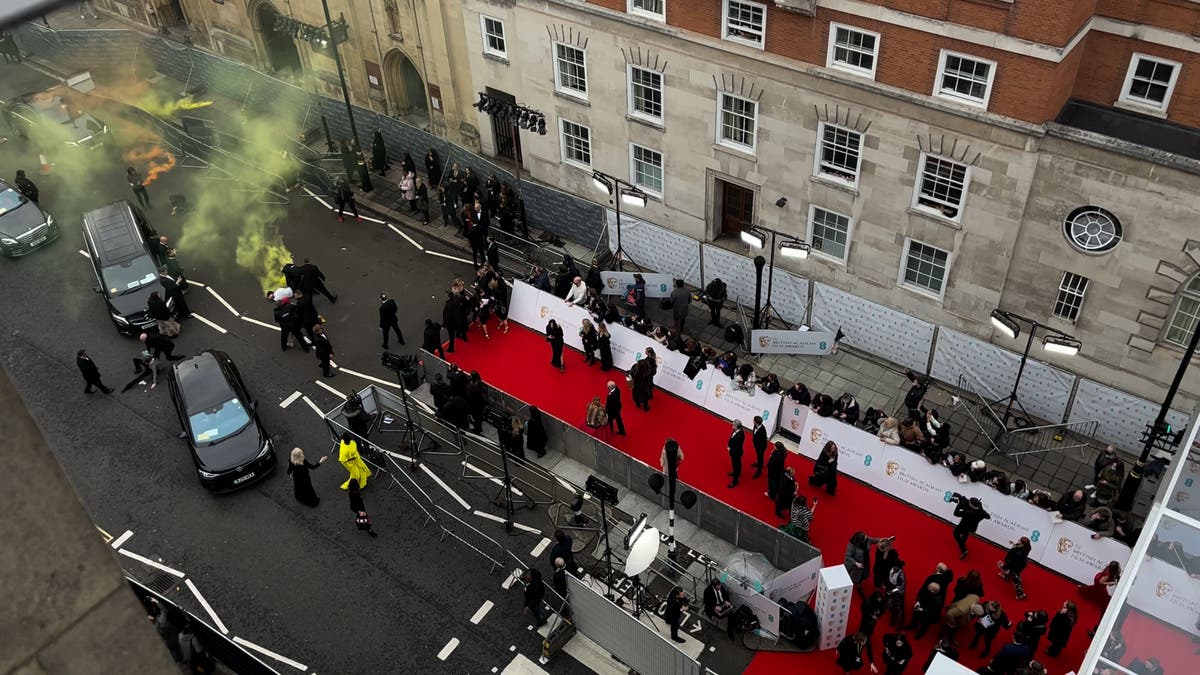 A Just Stop Oil protest has taken place near the red carpet for the Bafta film awards.

Protesters at the Royal Albert Hall in London could be heard chanting “just stop oil” and banging drums while surrounded by police.

A statement from the organisation said that 30 young supporters of the campaign disrupted the event to “demand an end to new fossil fuel projects in the UK”.

The group wore T-shirts that said “Just Stop Oil” and “Just look up”, in reference to the 2021 film starring Leonardo DiCaprio and Jennifer Lawrence which offers a satirical look at the climate change crisis.

In a statement from the group, 23-year-old protester Claudia said: “I am here supporting Just Stop Oil because I am absolutely terrified about our future.

“Last year the UK Government’s former chief scientific adviser warned us that what we do within the next 3-4 years will determine the future of humanity.

“Yet our Government, knowing this, knowing that continuing to support the oil industry is a death sentence for us all, remains determined to drag us down this path of suffering and destruction. And the mainstream media doesn’t care.

“So we are asking those with power and influence to use it, to do what is necessary, and use their platform to demand the Government just stop oil. We have to act like our lives depend on it, because they do.”

Dillon Parsons, 20, an aspiring filmmaker at the University for the Creative Arts, explained that he did not wish to disrupt the Baftas but felt he had “no choice” due to the “danger” of the climate crisis.

He added: “This is not a protest against the Baftas or the film industry, nor is it a publicity stunt. We couldn’t care less who wins what award. This is a cry for help from a generation who has the most to lose.”

Fatih Birol, executive director of the International Energy Agency, has previously said: “If governments are serious about the climate crisis, there can be no new investments in oil, gas and coal, from now – from this year.”

The Bafta ceremony at the Royal Albert Hall is being hosted by Hollywood actress Rebel Wilson, alongside stars such as Daniel Kaluuya, Emma Watson, Florence Pugh and Tom Hiddleston who will be presenting awards.

The evening will also feature entertainment by Dame Shirley Bassey, performing a rendition of a Bond theme song to celebrate 60 years of the spy film franchise, and a video message from the Duke of Cambridge, who is the president of Bafta.

The EE British Academy Film Awards will air on BBC One at 7pm.