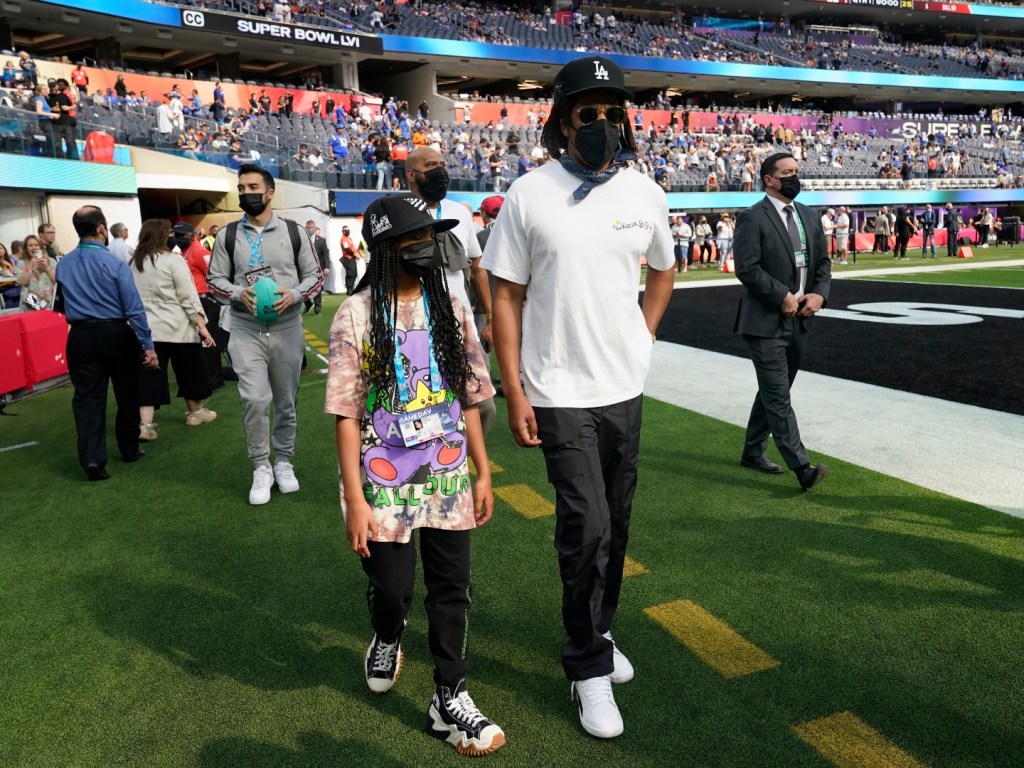 At just 10 years old, Blue Ivy Carter has been born into fashion royalty — and while that crown might hang heavy on some, each new public appearance from Beyoncé and Jay-Z’s 10-year-old daughter only confirms that she has her parents’ star style in spades. While mom Beyoncé enjoyed a night at home with twins Rumi and Sir, Jay-Z took their eldest out to watch the Rams vs. Bengals game at SoFi Stadium in Los Angeles, and that’s meant some seriously adorable footage of the father-daughter duo taking in the big game.

But first, a moment for Blue Ivy Carter’s instantly-iconic outfit: an oversized graphic tee, a black baseball cap, and chunky sneakers lifting her 10-year-old self a few extra inches higher while dad Jay-Z snapped photos of her out on the field.

While Beyoncé opted to stay home on this fine Sunday, this year’s game was still a particularly star-studded event including appearances from everyone’s favorite couple Ben Affleck and Jennifer Lopez, Dwayne Johnson, Matt Damon, Charlize Theron, and even Prince Harry, there with cousin Princess Eugenie.

And of course, there was another famous dad who brought his kids to the game: Kanye West, who shared footage of kids North West and Saint West at SoFi after a series of Instagram posts targeting ex-wife Kim Kardashian.

West (known legally known as “Ye”) and Jay-Z were once close friends, but West confirmed in recent years that his 8-year-old daughter North has never spent time with 10-year-old Blue Ivy. Seeing them both at the Super Bowl with their fathers, maybe mere feet from one another, we’re thinking once again of this friendship that could have been — and may one day be. For now, we’re glad Blue Ivy is training dad Jay-Z to get all her angles. It’s important that she keeps him on his toes.

Before you go, click here to see the best photos of celebrities at Super Bowl LVI.