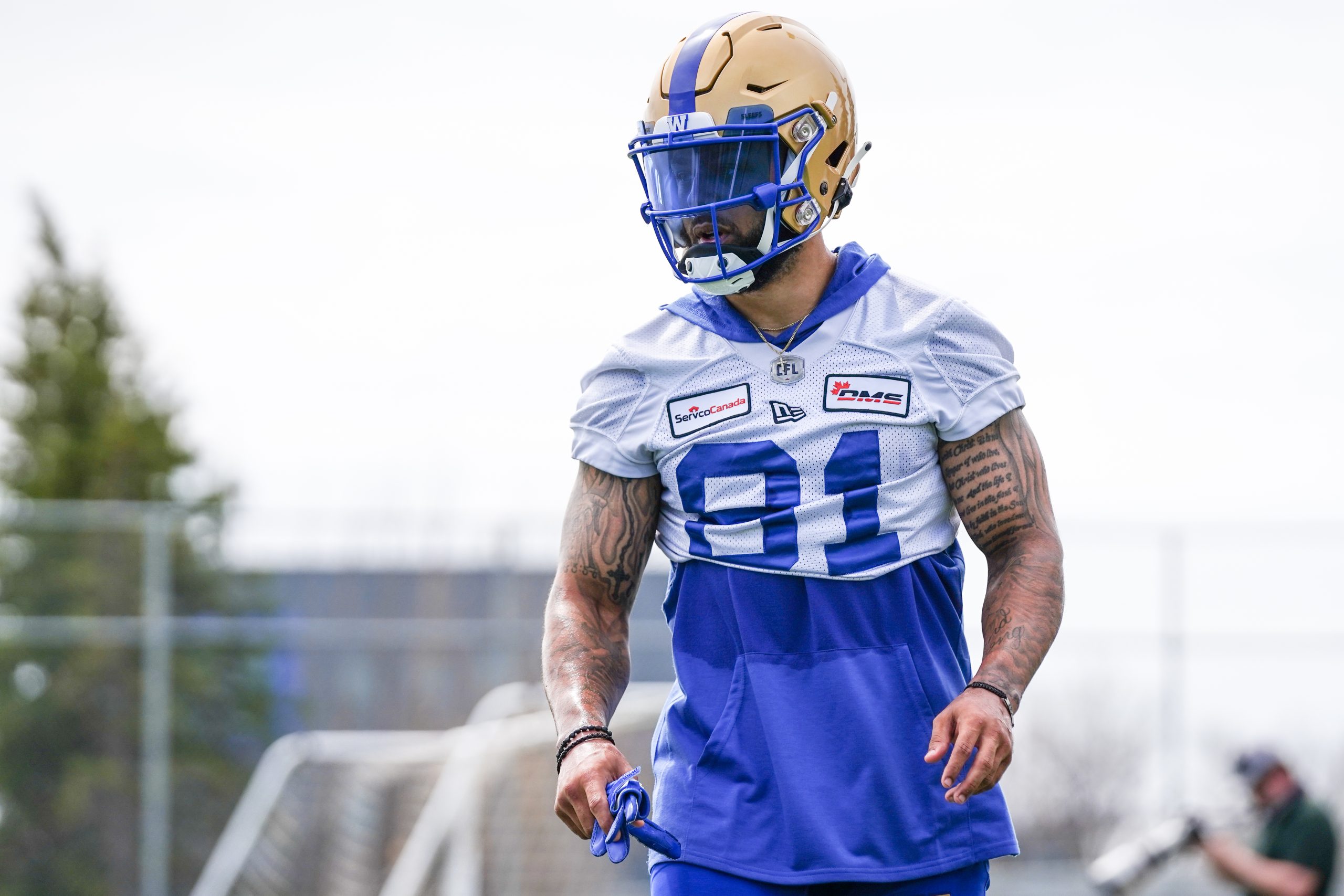 Sometimes it can be the simplest of gestures or a kind word that can lift spirits and keep dreams alive.

Blake Jackson had a good support system back home in Houston – his parents, his fiancée, his son, his brother, his doctors and physical therapists – but even the strongest of men can be challenged when working through the hand he was dealt 10 months ago.

Jackson, the converted-quarterback-turned-receiver, was one of the fresh new faces jumping out at Winnipeg Blue Bombers rookie camp a year ago when everything came to a full stop after ripping up his Achilles tendon. And in the cut-throat, win-right-now world of professional football, Jackson could have easily become just another name on the daily transaction wire who was cut adrift and quickly forgotten.

Still, it says everything about his perseverance and his skill – and to some extent the empathy of the Blue Bombers football management staff – that Jackson was back for this week’s rookie camp.

“I watched the majority of the games last year, including the Grey Cup, and kept up with some of the guys as well,” Jackson told bluebombers.com. “At a point in time it was hard to watch, knowing there was a possibility of being there and playing… especially the Grey Cup. It’s something me and Coach O’Shea talked about (prior to rookie camp). He just talked about, ‘Man, you were supposed to be there, but everything happens for a reason.’

Rehabbing any injury, especially one as debilitating as an Achilles tear, can be a physical and emotional grind. Jackson had those dark and frustrating days during the process and ultimately, found strength in his ability to fight through it all.

At the same time he was occasionally in contact with those players he had befriended last year in camp. The biggest boost during it all officially came in early January – just a few weeks following the Blue Bombers’ second Grey Cup championship – when the club signed him again to a one-year contract.

“That was a definitely a confidence booster through the whole process,” he said. “I’ve been on a bunch of teams before and I’ve always been an underdog who had to try and prove my worth coming from a small school (Division III’s Mary Hardin-Baylor), playing quarterback in college and trying to be a receiver and always had to prove something.

“Here, I feel like it’s one of the first places where they know my worth and they know what I can do, and I’m wanted. That’s one of the biggest things as a player – just knowing the organization and the coaches have confidence in me.”

Jackson twice referenced his support system back home during our conversation. But so much of an athlete’s physical recovery is done solo, with the mental battle even more personal – including the ‘Why me?’ phase that comes after an injury.

“My confidence was something I had to find again. Any athlete will tell you when you get hurt with a major injury you have to find that confidence again. So much of this is mental,” said Jackson.

“The first three months I went through (the why-me phase). With this injury I couldn’t even walk… it was non-weight bearing and I was in a boot and crutches. Not being able to move around and being able to do even the everyday things in life can get into your mind a little bit. I questioned it. I did go ‘Why did this happen to me?’ I had to find the blessing in disguise, the blessing in the darkness.

That could be critical for Jackson as main camp is set to open and he attempts to challenge for work in a receiving corps that lost Kenny Lawler and Darvin Adams to free agency and added a couple of veterans pieces in Greg Ellingson and Jalen Saunders to a starting group that already includes Nic Demski, Rasheed Bailey and Drew Wolitarsky.

Asked what served his ‘blessing in disguise’ during his rehab – if there was a moment when the negative turned to positive, so to speak – Jackson didn’t hesitate.

“The moment it started to turn for me and the blessing in disguise was being humbled in the sense of my spiritual strength and my mental strength,” he said.

“A lot of people, athletes in general, are physically strong – they can lift the world, they can run fast, they can jump high and they tend to work on those physical attributes and never focus on their spiritual strength, their mental strength. That’s why you see a lot of guys struggle mentally. (The injury and his recovery) was the blessing in disguise because it’s helped me become a stronger man on all levels of life.”