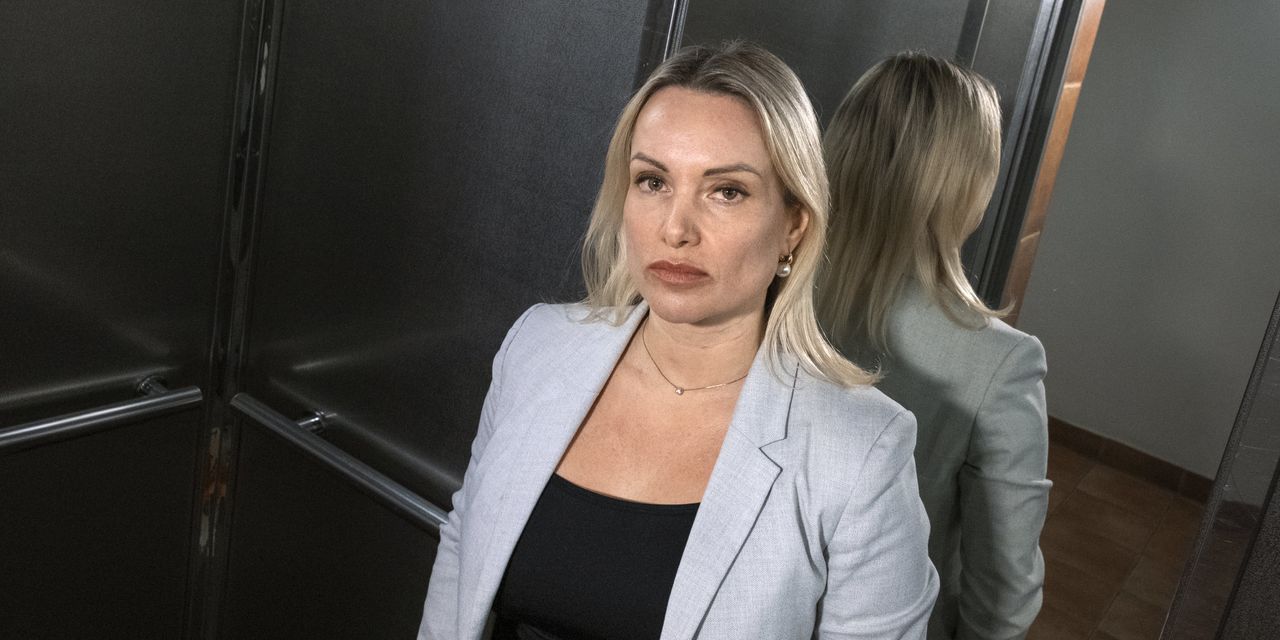 It wasn’t long after Russian troops pushed into Ukraine three weeks ago,

says, that she decided she had to make her voice heard.

A television producer at the Kremlin’s flagship network Channel One, Ms. Ovsyannikova at first thought she would join antiwar demonstrations on the streets of Moscow. Her son, fearing she would be arrested, hid her car keys.

Then she settled on a more audacious plan. As the evening news broadcast was starting on Monday, Ms. Ovsyannikova got up from her desk. Flashing her ID badge she passed through two security checkpoints and breezed past a final guard at the studio door.

Bursting into view behind the show’s anchor, she shouted, “Stop the war, no to war.” Before the camera cut away, she flashed a poster before millions of viewers. It read: “No war. Stop the war. Don’t believe propaganda. They lie to you here. Russians against war.”

Then she walked out of the studio past the stunned guard and into the hallway, where she dropped the poster on the floor and was met by executives rushing toward her. They promptly turned her over to the police.

In the space of about 10 seconds, Ms. Ovsyannikova had transformed herself from a self-described cog in Russian President

messaging machine into one of the most visible and daring dissidents opposed to his war.

“The future of my country is being decided right now,” she said in an interview. And she says she wanted to stand up and be counted.

Ms. Ovsyannikova was released from detention on Tuesday and fined approximately $280 by a Moscow court for a video she released explaining her actions. Her lawyers warn she could still face charges under a new Russian law that prohibits criticism of the military and makes it illegal to describe the Russian offensive in Ukraine as a war or an invasion. The penalty: Up to 15 years in prison.

Ms. Ovsyannikova said she has no plans to leave the country and is currently staying at a secure location provided by her attorneys. Invoking a phrase popularized by jailed opposition leader

she added: “Anyone interested in the bright future of this country needs to be here—even if for 15 years behind bars.”

The speaker of Russia’s lower house of Parliament this week called on the Channel One producer to be treated “with all severity.”

On Wednesday, Mr. Putin issued a broad warning against dissent. “Any people, and especially the Russian people, will always be able to distinguish the true patriots from the scum and the traitors, and just to spit them out like a gnat that accidentally flew into their mouths,” Mr. Putin said in remarks shown on state television. “I am convinced that this natural and necessary self-cleansing of society will only strengthen our country.”

Born in the Soviet Union in the now-Ukrainian city of Odessa to a Ukrainian father and a Russian mother, Ms. Ovsyannikova said she views herself as Russian, not Ukrainian. Her father, who served in the Soviet navy, was a Russian speaker who died about a year after her birth. Her mother soon moved her to Russia, where she has lived ever since.

Ms. Ovsyannikova’s interest in journalism blossomed when she was a high-school student in the mid-90s and her mother was working for a local radio station. In those days, she said, the Russian press was relatively free.

Ms. Ovsyannikova worked for state television in her hometown after graduation before moving to the capital, Moscow, in 2002, looking for loftier opportunities. After earning a master’s degree she started writing news reports for well-known anchor Zhanna Agalakova. Ms. Agalakova is one of the anchors who quit this week.

It was in 2008, when Russia launched a military campaign against the neighboring country of Georgia, that Ms. Ovsyannikova says she first started feeling “cognitive dissonance”—loving her country but disagreeing with its direction.

Still, she kept up her work at the state broadcaster. Her career had taken a back seat to her personal life and children, who are now 11 and 17, and she needed to provide for them.

Then, in August 2020, when Mr. Navalny was poisoned with the Novichok nerve agent, she thought about protesting. Mr. Navalny has blamed government agents. The Kremlin has denied any involvement.

“But I understood that I work for a government channel and I can’t allow myself this,” said Ms. Ovsyannikova. “With all these turbulent financial crises, some constant source of income is necessary. You have to feed your family.”

Less than two years later came the war in Ukraine. “We arrived at this point of evil and we can no longer tolerate it,” she said. “It’s a fratricidal war. Ukrainians are the same Slavs and every second Russian has relatives in Ukraine,” she said. “They chose their path, their direction toward Europe, to European values. That’s their choice. They are free people.”

A friend of Ms. Ovsyannikova, Nina Aleksa, quit working for a state television channel in 2016 and began working for a since-banned opposition organization. The two would discuss politics while watching their children at the playground.

“She always had thoughts like this,” Ms. Aleksa said. “But I never pushed her or criticized her.”

Ms. Aleksa, 37, moved to Tbilisi, Georgia, a growing center of Russian émigrés, in June last year, and hadn’t heard from her since she had left.

Last Saturday, she said, she received a text from Ms. Ovsyannikova.

“She asked me about emigration, how is it there, how is Tbilisi,” Ms. Aleksa recalled. “She said, ‘It seems this is my future.’ ”

Then, on Monday at 6 p.m., Ms. Aleksa received another text from her friend: Please record the 9 p.m. news. “Suffer a bit,” Ms. Ovsyannikova joked to her friend. “You’ll like it.”

“I thought she was warning me to watch for a drop of insider information, like Putin would announce his resignation or something,” Ms. Aleksa said.

When she saw Ms. Ovsyannikova on her screen, she didn’t believe it. She reached her about an hour later, but Ms. Ovsyannikova said she was at a police station and would text her. She sent Ms. Aleksa a prerecorded video and asked her to share it with foreign media.

Ms. Aleksa, who now works for the Washington-based Free Russia Foundation, says donors have pooled enough funds to get Ms. Ovsyannikova and her whole family out of the country. She strongly disagrees with her friend’s decision to stay.

said that France would grant asylum to Ms. Ovsyannikova and that he would raise the issue with Mr. Putin.

Ms. Ovsyannikova said she believes most Russians are against the war. The day Russia launched its invasion, everyone she knew—including her colleagues—were horrified and “fell into a stupor,” she said.

“The life of Russians is coming apart like a house of cards,” she said, pointing to the exit of foreign companies and the effects of sanctions on the Russian economy. “People just haven’t fully realized it yet.”

Ms. Ovsyannikova explained why she made her placard bilingual. “What was written in English was meant for the Western public, so people abroad understand that the majority of Russians are against this pointless war,” she said. “The Russian was for our zombified people that believe this propaganda machine.”

The protest has been welcomed by a swath of opposition activists and independent journalists, but some were also critical of Ms. Ovsyannikova for helping push the government line for years at Channel One.

Ms. Ovsyannikova says she has decided she can no longer be part of that machine, but she brushed aside the suggestion that she had really done much to further it.

“I was a cog,” she said. “Don’t make me out to be a super champion of injustice and super responsible over what was happening with their propaganda.”