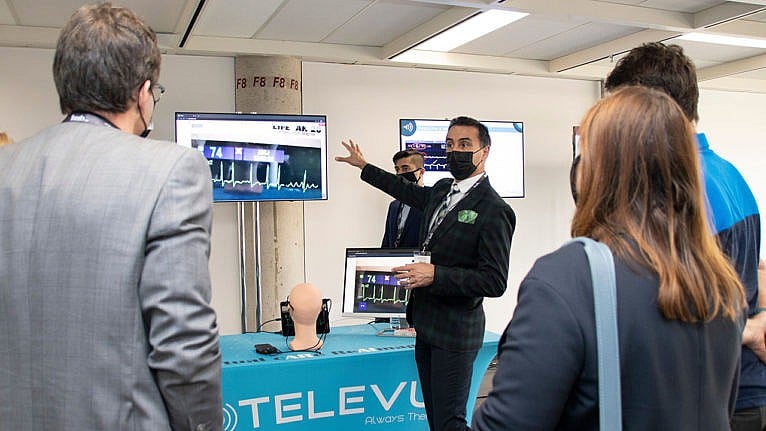 By harnessing the power of 5G, TELUS is linking startups with big partners and cutting-edge wireless connectivity in bid to revolutionize industries worldwide

With the launch of Hub350, TELUS debuts its fourth 5G innovation lab in as many years. Located in Canada’s largest technology park, Kanata North, the new hub is an Ottawa-area hotspot for up-and-coming entrepreneurs to test digital solutions to real-life challenges—like an ambulance medic using augmented reality glasses to stream live instructions from an ER doctor or firefighters harnessing data from 5G-connected drones to reduce the risks of seasonal wildfires.

This new hub complements TELUS’ other 5G labs. The facility at Montreal-based Zú is dedicated to entertainment innovations like 3D holograms and augmented reality, while the hub at Olds College in Alberta is centered on future-forward agricultural tech and food sustainability. TELUS has also partnered with the University of Alberta, and is currently prioritizing research into areas of precision agriculture and autonomous vehicles.

Hub350’s goal is to be agile, using 5G to fuel big ideas from the bright minds of Canadian innovators in the digital space.

“The traditional approach to product development is to come up with hypothetical-use cases, but TELUS’ approach through Hub350 is more practical and hands-on,” says Samer Geissah, director of technology strategy and architecture at TELUS. “We don’t know what the best solution is until we work together to try it out in the innovation hub.”

Since 5G delivers speeds of up to 1.7 Gbps and ultra-low latency, the technology is guaranteed to revolutionize industries worldwide. The question TELUS and its partners want to answer: How?

The solutions they find will have a major impact on where Canada stands as a technology player on the global stage. Just as countries that led in 4G development benefited most from the proliferation of apps and smartphone tech, the countries that lead in 5G will reap the benefits as they shape the technology landscape of the next generation.

To help in this mission, TELUS is developing Hub350 alongside partners, such as RBC and Salesforce, as well as academic institutions Carleton, Queens, the University of Ottawa, and Algonquin College. Already, Geissah says TELUS and various banks have been discussing how a future cohort of entrepreneurs can develop wireless retail services in bank branches, and a connected vehicles role in usage-based insurance. Many other corporate partners will be brought in to set challenges, as well.

“We’ll publish a challenge, then gather all the pitches, filter them and pick 10 to execute. Once the product is executed, if successful, we’ll support the startups in putting together a proper go-to-market strategy,” says Geissah.

Among TELUS’ earliest startup partners is AirMarket, a 5G-connected drone company working on using high-definition onboard cameras to stream video data to aid with things like wildfire prevention. These solutions still face some policy challenges including access to the necessary bands of 5G spectrum, the airwaves on which wireless data travels. For drones to function seamlessly—especially in rural areas—users need 5G for ultra-low latency (or no lag time) to communicate with the technology. Canada is set to auction the next band of 5G spectrum in early 2023, and ensuring rural spectrum is put to use is of critical importance to TELUS.

Another budding 5G-enabled business is TeleVU, a healthcare startup working on telepresence solutions for healthcare in remote areas.

“Ninety-five per cent of specialists are within the few big cities in Canada,” notes Ryan De’Larami, founder and CEO of TeleVU. “All the rural areas have access to less than five per cent of those specialists. How do you bridge that gap? How do you take that geography barrier out of the way? Through an augmented reality telepresence solution.”

Founded in February 2021, TeleVU is built using De’Larami and his co-founder’s long-standing experience in healthcare. Their technology has already been field tested in international projects from Canada’s North to Mozambique for everything from standard health check-ins to colorectal surgery. In addition to the smart glasses technology, TeleVU is also developing other cloud-based remote patient monitoring tools, and the founders are hoping to build out an entire ecosystem of virtual care with AI (artificial intelligence) oversight.

It’s not only a compelling business case, but also “incredibly rewarding work”, says De’Larami. He believes TELUS and Hub350 are already helping to push the company further toward its goals. “Hub350 exposes this technology to organizations and companies so that they see the benefit we’re offering,” says De’Larami, who notes that this exposure could help prompt more funding and opportunities. The federal government has expressed an innovation agenda, and the Government of Ontario stepped up to offer $1.5 million to Hub350 to continue to drive investment in tech startups in the province.

The sky’s the limit

On the technical side of things, TELUS’ support, which will likely include access to 5G spectrum that young companies might not otherwise have access to, will help TeleVU develop for the next generation of wireless connectivity.

“AI is a big piece for us, whether it’s through speech recognition or assessing patient risk,” says De’Larami. “We’re running a lot of algorithms simultaneously, which can slow things down—but if you have the high-speed 5G connection, then the sky’s the limit.”

Broadening horizons for these sorts of promising new companies is precisely the goal for Hub350. Over the next few years, Geissah hopes to see Canada take steps toward returning to the forefront of wireless technology on the global stage.

“Canadian companies, like BlackBerry and Mitel, actually paved the way for creative innovation globally,” points out Geissah. “I grew up in the Middle East and I knew about Mitel. When I was studying in the States, I knew what BlackBerry was doing and what Nortel was doing. I think coming back now with 5G to revive that—it’s a really nice boost to the region, but it also will propel us back to global technology leadership.”