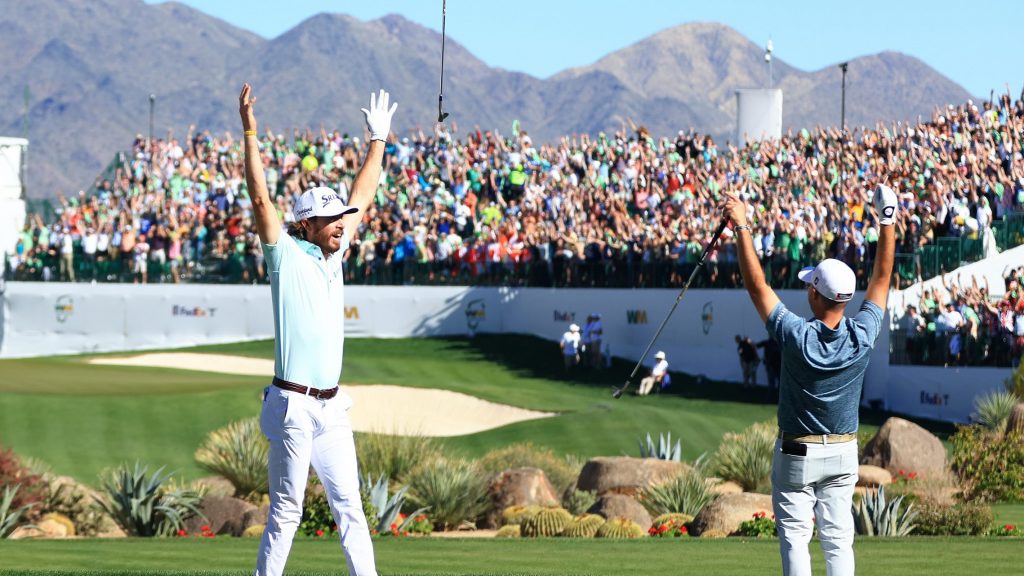 Bits
Sahith Theegala didn’t capture the WM Phoenix Open but he sure won over a lot of golf fans with his spirited play, passion and emotion. That he was in tears after his round Sunday, when his chances crashed and burned with a bogey at the driveable par-4 17th, was both heart-wrenching and refreshing. Too often we see pro golfers shrug off a near miss given the six figures they’re going to cash ×× Theegala, a sponsor’s exemption last week, hasn’t come out of nowhere. He earned his PGA Tour card through the Korn Ferry Tour Finals series and prior to turning pro, he won all three major collegiate golf awards playing for Pepperdine University. He’s one of only five golfers to do that. He’ll challenge again and given his Indian heritage that is great for a sport continually seeking a wider audience ×× Love Theegala’s golf swing by the way. Athletic and natural. Not your typical picture-perfect move ×× Nice to see Scottie Scheffler prevail Sunday. Previously atop most best-without-a-PGA-Tour-victory lists, it would have been tough for him to not seal the deal again. He’s too good to have that hanging over his head. He’ll make a major run this year ×× A solid T13 finish for David Hearn on the Korn Ferry Tour, his first made cut in three events on the AAA circuit. Hearn, who has played four PGA Tour events this season, will be a Korn Ferry Tour regular as he looks to earn his way back to the big leagues ×× A thought triggered by a tweet: No group overestimates like amateur golfers. No guy, you don’t “get it out there over 300 yards most times.”

Bites
The 17th at TPC Scottsdale is such a fantastic penultimate hole. Enough peril to force players into a decision off the tee and a green capable of tough enough pin positions to make pitch shots for those who lay up very nervy. Maybe it’s not as good of a golf hole architecturally as other short par 4s we see, like the 10th at this week’s host course, Riviera Country Club, but that it comes so late in the round makes it the most exciting and dramatic on tour ×× Speaking of Riviera, long-hitting Canadian Taylor Pendrith has drawn into this week’s Genesis Invitational. That’s big for the rookie given the Genesis is a limited field of 120 players with a massive $12-million purse. Wonder what club Pendrith will reach the 10th hole’s green with? ×× TPC Scottsdale story: I played in the Scottsdale Open, a two-person team amateur event, years ago, with a fellow scribe as my partner. We didn’t pay much attention to the scoring because we were there to write about the experience, not compete. But we were tied for third entering the final round at the TPC course, a shotgun start at 9 a.m. following a very late night. We began on the par-5 15th. I hit my tee shot into the water, another one into the drink on an approach, and made 10. My partner made a four. We were laughing and celebrating our better-ball birdie when the two guys we were paired with broke the news. The final round wasn’t better ball like the first two rounds. It was combined score. We had no clue, not having read the format. I then made a three on the 16th and my partner made an eight. It was a dramatic slide down the leaderboard ×× So Charley Hoffman takes to social media to rant about a penalty stroke he received in Phoenix as a result of a rather silly rule but goes further to claim the PGA Tour not protecting its players makes it little wonder why guys are “wanting to jump ship and go play another tour.” One problem Charley: You’d have incurred the same penalty on any other circuit. The rules are the rules. Childish of Hoffman, a PGA Tour advisory council director, to use the red-hot subject of the Saudi-backed Asian Tour to stoke the fire.

Barbs
The WM Phoenix Open has long been the PGA Tour’s party stop. The 16th hole, an otherwise bland par 3, became rowdy organically, and then the craziest scene in golf when tournament organizers and the tour smartly embraced the mayhem. It reached another level this year thanks to Sam Ryder’s hole-in-one on Saturday and an ace from Carlos Ortiz on Sunday. You’ve not flipped on a sports channel for days if you haven’t seen the beer can shower that hole received on both occasions or pals Joel Dahmen and Harry Higgs shedding their shirts in celebration of a made par putt. It was awesome. As good as the actual golf is on the PGA Tour, the circuit often suffers from ennui. Same format week after week, some uninspiring golf courses, players who show little personality given all that’s at stake amid intense competition. The 16th at TPC Scottsdale offers pros an opportunity to be real entertainers and they love it. They embrace the chance to be showmen like they see in other sports leagues. It’s why I’m continually surprised other tour stops aren’t inspired to try something similar. Not a wild party but something unique. The best any has done is the RBC Canadian Open with its “rink” hole, whereby hockey rink boards surround a par 3. It worked extremely well at Hamilton Golf and Country Club in 2019 when the Toronto Raptors were in the NBA Finals and Raptors chants rang out with every group that passed through that hole. Rory McIlroy, trying to win a golf tournament and possibly shoot 59 on Sunday, raved about the atmosphere. The tour doesn’t need to turn into ‘Happy Gilmore’ every week, but it should continue to look for ways to be more entertaining. The best way to do that is to take note of something special it already has.