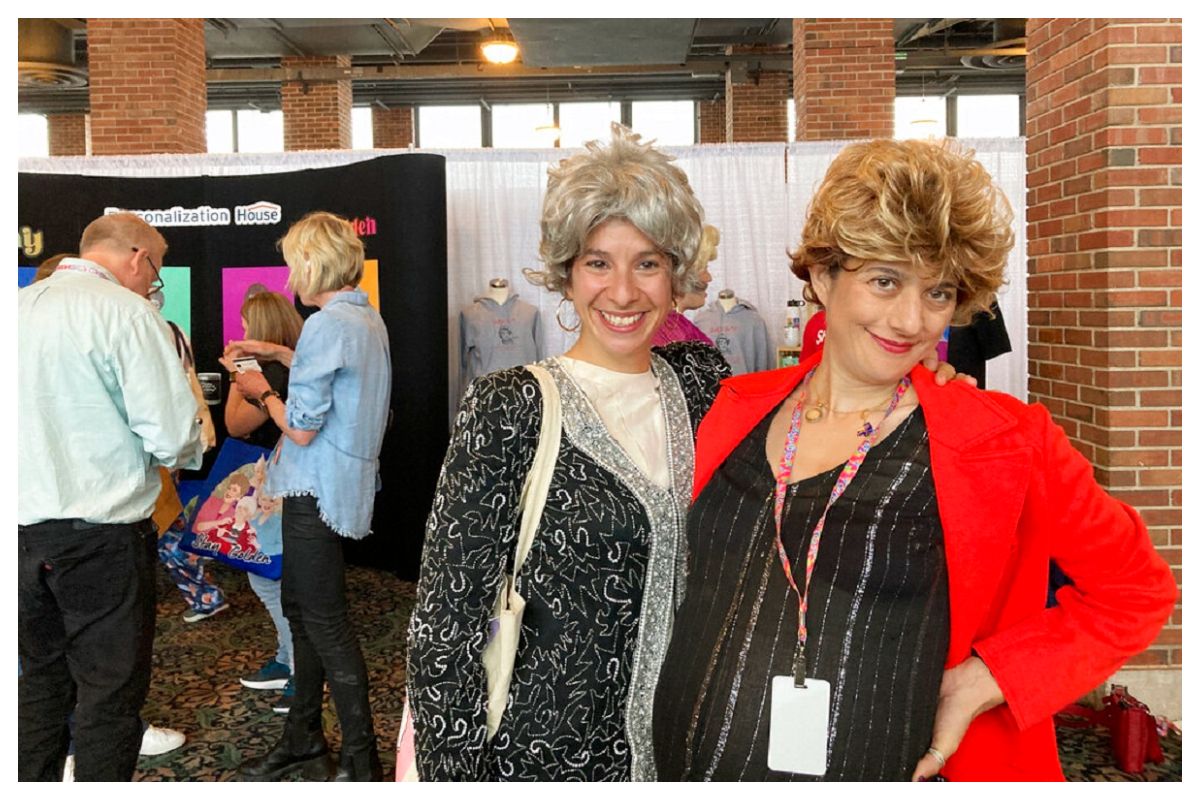 But sisters Hillary Wasicek, 37, and Melissa Gluck, 43, took this weekend’s inaugural “The Golden Girls” convention at Chicago’s Navy Pier to heart. Both women, who flew from California, spent Friday in elaborate cosplay as the characters of Dorothy and Blanche. The series has always held a special place for them because of its themes of friends becoming family and inclusiveness. Dressing up in wigs and all, which they previously did on a “Golden Girls” cruise, just enhances the convention experience. Also Read – Video: Helicopter Crashes Off Crowded Miami Beach Into Atlantic Ocean | WATCH

“It’s a fun expression of showing respect and appreciation for something you admire. It just makes you feel more a part of it,” said Wasicek, who plans to don a different costume every day. “We just met so many people and heard so many stories. It’s like ‘These are my people.’” Also Read – Raining Lizards: It’s So Cold in Florida That Iguanas Are Freezing & Falling From Trees | Watch

For Gluck, meeting other “Golden Girls” buffs gives her “a greater appreciation of the show itself. Now, I’ve gotten my son and husband into it.”

Golden-Con: Thank You For Being a Fan, which lasts through Sunday, is giving those who adored the NBC sitcom a chance to come together. More than 2,000 attendees are expected to converge. The show, which ran from 1985-1992, starred Bea Arthur, Rue McClanahan, Estelle Getty and Betty White — the last remaining “Golden Girl” who died at age 99 in December. It was revered for showing their characters, who shared a house in Miami, dealing with issues later in life like ageism, sex and LGBTQ rights.

Like any “con,” there are panels and Q&As with people who guest-starred or worked behind the scenes. There is a vendors market with booths carrying “Golden Girls” themed candles, masks, T-shirts and other merch. Fans can snap photos in a recreation of the kitchen where the “girls” always ate cheesecake as well as a giant replica of Sophia’s trademark purse. There are also two separate drag queen groups scheduled to perform tributes.

Among the guests are actress Bonnie Bartlett, known for roles on “St. Elsewhere” and “Boy Meets World” (both alongside her husband, actor William Daniels). She is notable to for playing a stuck-up new friend of Dorothy’s in a third-season episode. The two-time Emmy winner, 92, however, did not turn her nose up at the idea of a fan convention.

“I was running around chasing after Betty Grable and people like that,” Bartlett said. “I was a big fan when I was a kid. So I understand this. My husband doesn’t understand it but I do.”

Stan Zimmerman, a TV producer whose second writing job was on the first season, never imagined mingling with fans nearly 40 years later. Being in an industry where popularity is fickle, he’s not taking it for granted.

“So I’ve seen the trajectory of the popularity, but nothing like what is happening now,” Zimmerman said. “It’s so cool to see young people that obviously were not even born when we wrote it know every line.”

This “Golden Girls” extravaganza was originally just supposed to be a bar trivia night. Zack Hudson, who works in social services for seniors and is a “hard-core fan,” approached Brad Balof, his friend and fellow fan about staging an event back in November. They ended up planning to book a community center but then interest outside of the state and even the U.S. intensified.

“All we did was make one announcement on social media,” Hudson said. “It just kind of escalated from there. So we pivoted a little bit to welcome as many people as we can. And we’re here now.”

Hudson, Balof, a nightclub manager, and Balof’s brother Brendan, who lives in Phoenix and has event planning experience, organized a small army of volunteers and staff. The entire group has been juggling their regular jobs and convention planning for the past several months. Hudson tracked down all the talent for the panels. While they secured some sponsorships, the bulk of Golden-Con’s funding comes from ticket sales.

They believe interest was also heightened because “Golden Girls’ devotees were looking for an outlet to continue grieving White. So there is one booth with hundreds of notecards for fans to write about their favorite memories involving the show or what it did for them.

“This is a chance to pay that much (respect) to a show that they loved and actresses that made it shine,” Brad Balof said. “One thing that does help the show remain timeless is that there’s enough humor that is not dependent on a specific situation, political or geographic … It’s just funny.”