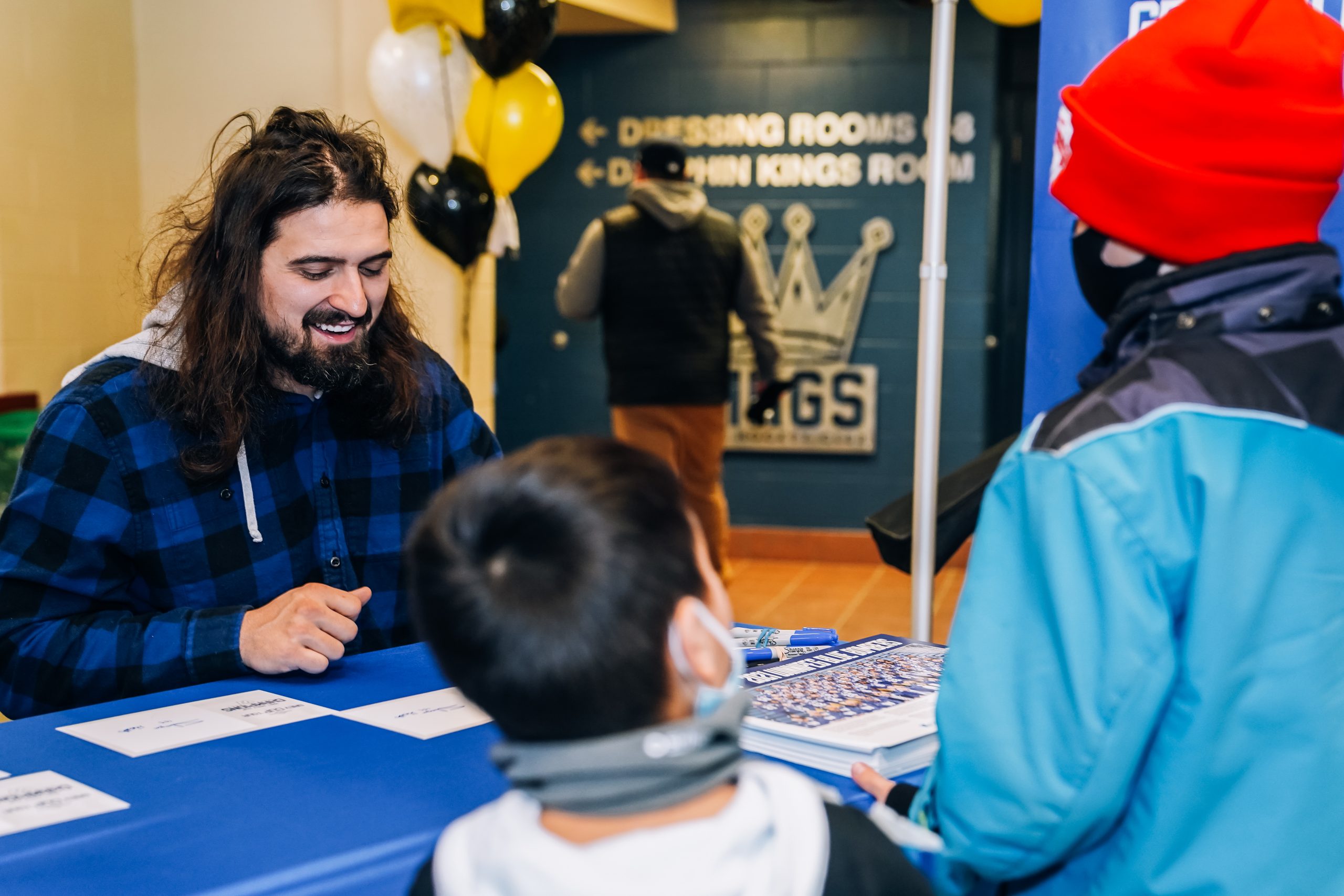 Shayne Gauthier’s assignment was straightforward: help be a transporter of the Grey Cup to Dauphin, Mb, and then upon arrival, accompany the most cherished trophy in Canadian Football on a series of weekend stops.

Here’s his takeaway from his jaunt west and north: While the Winnipeg Blue Bombers linebacker has now twice lifted the ol’ mug after championship wins in 2019 and 2021, what struck him on his trek was the gobsmacked reaction of others when simply in presence of the trophy.

“The first night we got to Dauphin we went to Boston Pizza,” began Gauthier in a chat with bluebombers.com this week. “There was a youth hockey tournament in town, the U-15 provincial tournament, and some kids there saw the big Grey Cup case and were stupefied by it. When we pulled the trophy out everyone in the restaurant suddenly had big eyes. They were really happy to see it and take some pictures with it.

“It’s just a beautiful trophy and there’s so much history with it. When you sit down and just look at it and think about the road it’s been on… it’s phenomenal. It is special.”

The Grey Cup is on tour again this offseason, just as it was following the Blue Bombers win in 2019 and is making a stop in Brandon this weekend. Gauthier accompanied the trophy to Dauphin City Hall, to an RCMP detachment, to the fire department, to a Dauphin Kings game and to the homes of some diehard fans.

Saturday nights with the @dauphinkings 💯

And at every stop, the reaction to the trophy was the same combination of awe, wonderment and joy.

“We took it to some season ticket holders’ houses,” Gauthier said.  “It was awesome to see those guys. It’s one of the reasons we do this. Those are our supporters. We have the best fans in Canada and for them to drive 3 ½ hours to come to every home game, they deserve to have a chance to have the cup at their house.

“We went to Shane Montpetit’s house. He had a ‘Bomber’ basement that was just amazing. He had so much stuff. You can see how much of a diehard he is, and he had a chance to drink from the Cup. That was a special moment.

“We won it for ourselves, but our fans are so important, especially in the CFL. We know we need those fans in the stands to keep the team going. To see them react… as soon as you get to their doorstep they were mesmerized by the trophy. Some of them were speechless they were just so happy.”

1. Timing is everything, as they say, and when it came to what was supposed to be Gauthier’s first experience with the Grey Cup after the in 2019, well, let’s just say those plans were suddenly scuttled.

“After we won in 2019, I was supposed to get it in March – one week after the pandemic started,” said Gauthier. “We had everything all set up and it didn’t happen.”

Gauthier hails from Dobleau-Mistassini in northern Quebec and we recapped his road to the Blue Bombers when he signed a contract extension earlier this year. And bringing the Cup there meant so much to the veteran linebacker.

“After what happened last time, I didn’t know if I’d have the chance to do it again,” he said. “I had a very short window of time because Jesse Briggs (who lives in Montreal in the offseason) was having it after me.

“I picked it up in the morning, I went home to my parents’ and had a bunch of family there to see it. Then I had a little gathering at a restaurant in my hometown. But after that I had to go back to Quebec City to bring it back to Jesse. It was a very long day, but I had good friends who were with me the whole time to drive me around. It was amazing to bring it to my hometown. People were happy and I was happy, too, to share it.”

2. It’s hard to recall a new-to-the-CFL receiver getting as much attention in these parts over the last few days as Whop Philyor, the former Indiana University star.

Granted, a great deal of that hype comes from his first name – officially, his name is Mister Elias De’Angelo Philyor, but goes by childhood nickname, ‘Whop’ which was hung on him by his dad when he was a child because every stop they made at Burger King he was asking for a Whopper.

Ultimately the bigger question, of course, is whether Philyor can find room in a receiving corps that lost CFL leading pass-catcher Kenny Lawler to Edmonton and veteran Darvin Adams to Ottawa in free agency.

The addition of Greg Ellingson from the Elks in free agency will help offset the Lawler/Adams departures, but the Blue Bombers will need more candidates to round out a crew that includes Nic Demski, Rasheed Bailey, Drew Wolitarsky and Kelvin McKnight, all of whom made starts last year and return in 2022.

Philyor comes to the Blue Bombers after being one of the final cuts of the Minnesota Vikings last year and sports an impressive resumé that saw him finish his career with the Hoosiers ranked fourth in school history in receptions (180) and 100-yard games (seven), ninth in receiving yards (2,067) to go along with 12 touchdowns.

He joins Blake Jackson, who returns after impressing in camp last year before injuring his Achilles, along with T.J. Simmons and 2020 CFL Draft pick Brendan O’Leary-Orange, who dressed for three regular-season and both playoff games last year. But expect the Blue Bombers scouting department to have a number of other candidates in place by the time training camp opens.

“We had our updated roster meeting this week and there’s still going to be 9-10 more receivers signed,” Blue Bombers GM Kyle Walters told bluebombers.com. “Those guys and the defensive backs are the biggest groups we sign just to help get you through training camp.

“We’re working at it. We have some free agent camps coming up and we’ll soon start filling out the training camp roster.”

3. Teams can bring 100 players to training camp this year, plus non-counters like their draft picks, so the Bombers have a ton of players to sign between now and the opening of camp on May 15th.

Translation: the team will be burning up the transaction wire between now and the opening of camp.

4. The Blue Bombers will open 2022 training camp with question marks about the placekicking situation now that Sergio Castillo has officially signed with the Elks.

The club currently has Marc Liegghio, who finished the year as the team’s punter, and Ali Mourtada under contract. Liegghio was 5-of-8 in his field goal attempts last season, while Mourtada was 8-of-15 – although he did go 4-of-5 in his last game before Castillo replaced him.

“About 10 days ago after speaking to Sergio’s agent I said to Mike (O’Shea), ‘This is not feeling quite right. We better start exploring Plan B and Plan C because I don’t think Sergio, as Plan A, is going to come in for us’ whether that meant he was going to the USFL at the time or getting a bigger offer from somebody else,” said Walters. “The (contract) numbers he was throwing around were a little bit higher than I expected. When something like that happens we tell the agent, ‘Good for you guys. Good for Sergio’ and then you wish them the best.

“Certainly, we plan on having a little bit more of a punting and kicking competition this year,” Walters added. “We’ll find the right guys to compete. You have to assume, though, that Marc and Ali are going to be better this year. They took their lumps at times last year, but they’re both hard-working guys that have a lot of pride and a lot of natural ability. It’s just a matter of them becoming more confident and consistent.”

5. And, finally, with this much snow on the ground it’s difficult to imagine camp being so close, but the countdown is on big time and it’s time to get excited about 2022.