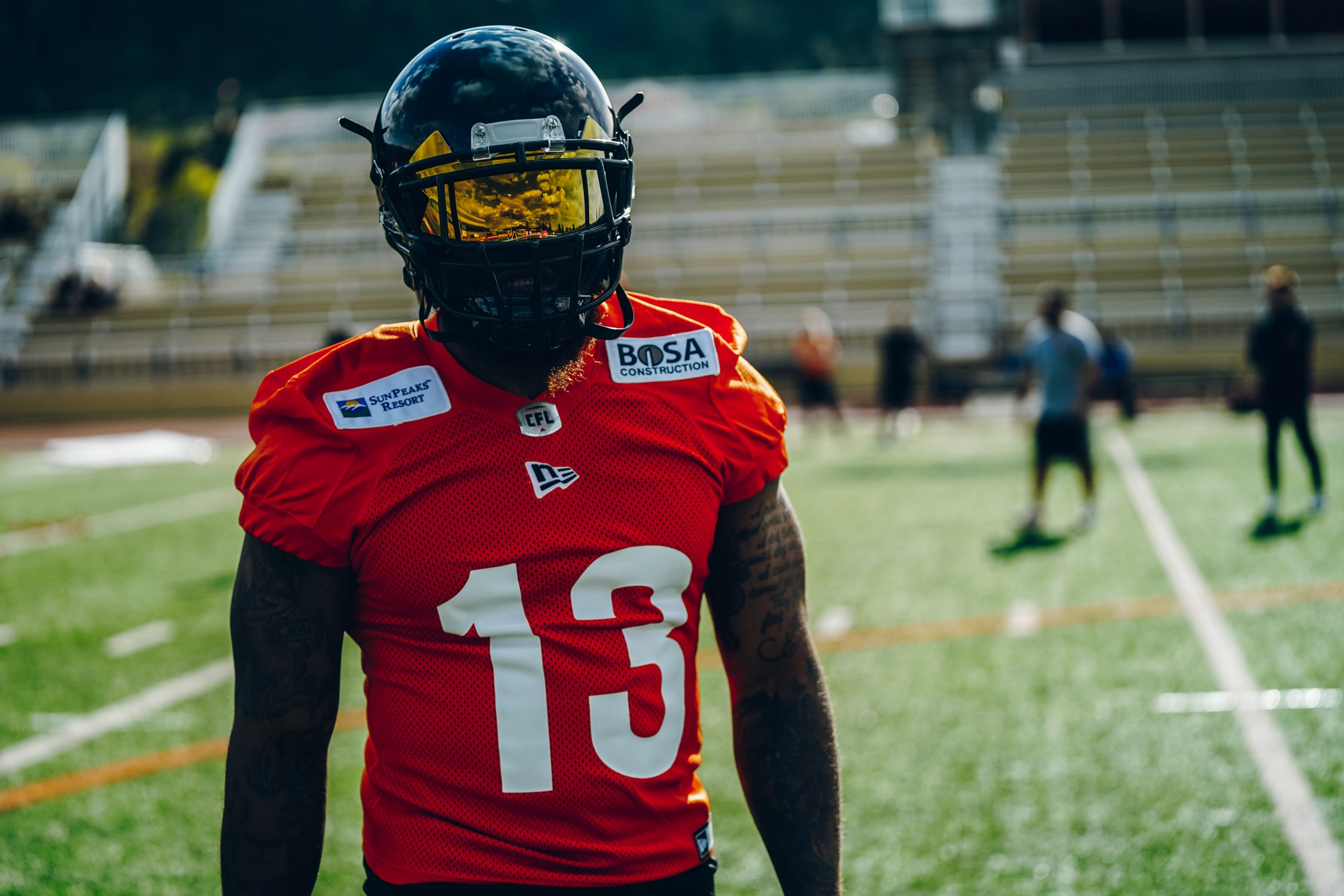 When it comes to solidifying a spot with what will be a mightily impressive receiving core, first-year Lion ArDarius Stewart is trying to draw on previous experience.

Signed by current Lions’ assistant GM Ryan Rigmaiden who was the Winnipeg Blue Bombers in 2021, the former Alabama Crimson Tide wideout, of course, had to wait a year to strap on the pads. Then he emerged from 2021 camp with a spot on the Bombers’ practice roster, only to be cut loose just after Labour Day.

Following two days of workouts with fellow first-year Leos at Hillside Stadium, Stewart reminds himself to not take anything for granted.

“I never thought I would get another opportunity like this,” said Stewart following Thursday’s morning practice.

In Winnipeg, I didn’t feel anything like I do so far here. I’m more comfortable, I feel like I can learn the playbook and I feel like guys are working with me to get me better. I’m feeling great.”

And you wouldn’t blame him for a moment if he was indeed viewing this as his final shot at a long career. A third-round draft pick of the New York Jets in 2017, Stewart suited up in all but one game of his rookie campaign before being re-assigned to the practice squad to start 2018 after serving a suspension for performance-enhancing substances.

It was after practice roster stints in Oakland and Washington where the Fultondale, Alabama native first ventured north. He plans to now make the most of this opportunity in the Tournament Capital, while also thriving to prove he can in offence that features more than a few outstanding athletes; especially at the position of receiver.

“It’s been a long road, a long off-season trying to keep myself ready and healthy to do what I need to do for the team,” Stewart explained.

“Rigmaiden has been solid for me since day one. After Winnipeg, he kept talking to me and there was finally the opportunity to get me over here.”

Any given camp is filled with players like Stewart; those who were standouts at major college programs and then parlay those into NFL opportunities before realizing just how hard it can be to crack a professional roster long-term. It certainly isn’t for the faint of heart. Stewart’s NFL draft stock rose after a solid four years with the Alabama Crimson Tide. In 40 games, Stewart caught 129 passes and amassed 1,713 yards while scoring 12 touchdowns.

“He’s a humble kid, that’s one of the more impressive traits,” said Rigmaiden.

“Plenty of guys come up here having played at big schools or in the NFL and don’t always take into account just how many talented athletes are here. That’s not the case with ArDarius. He knows he has to earn it.”

He also helped the Crimson Tide win three straight SEC titles and capture the College Football National Championship in 2015, hauling in two receptions for 63 yards in the win over Clemson. That Alabama squad featured Jalen Hurts at quarterback as well as fellow offensive playmakers Derrick Henry, Kenyan Drake, Calvin Ridley and OJ Howard. Memories that will last a lifetime.

“That was the highlight of my whole career so far. The one year everybody counted us out,” said Stewart.

“I was able to be with coaches like Nick Saban, Lane Kiffin, Kirby Smart and all of those guys. That was basically a staff full of head coaches. All of those men helped me get to where I am today. I established great relationships with all of those teammates on the field. We bailed each other out.”

Times were rough growing up in Fultondale. Stewart relayed a story that the 2A high school he attended didn’t have any track or much football gear to give its students. Scraping by with the bare minimum was something he quickly became accustomed to. He credits both parents as well as a great support system that included grandparents and an uncle for helping him rise above adversity.

“I was proud to put my city on the map and let everybody know it doesn’t matter where you are or where you come from. You just need to do whatever it is you need to do.”

One more mini-camp day before the completion heats up with veterans arriving on Saturday for the main event. This three-day preamble has been beneficial for youngsters like Stewart as it allows them to pick up on some of the things they are still learning about the Canadian brand of football.

“Just getting the timing down; seeing which receiver goes first, which goes second, things like that,” he said.

“The waggle makes things more interesting. A lot more running is involved and you can do more movements. I like that about playing up here.”

Stewart has that big-game experience. You can tell he is anxious to show it off once again.