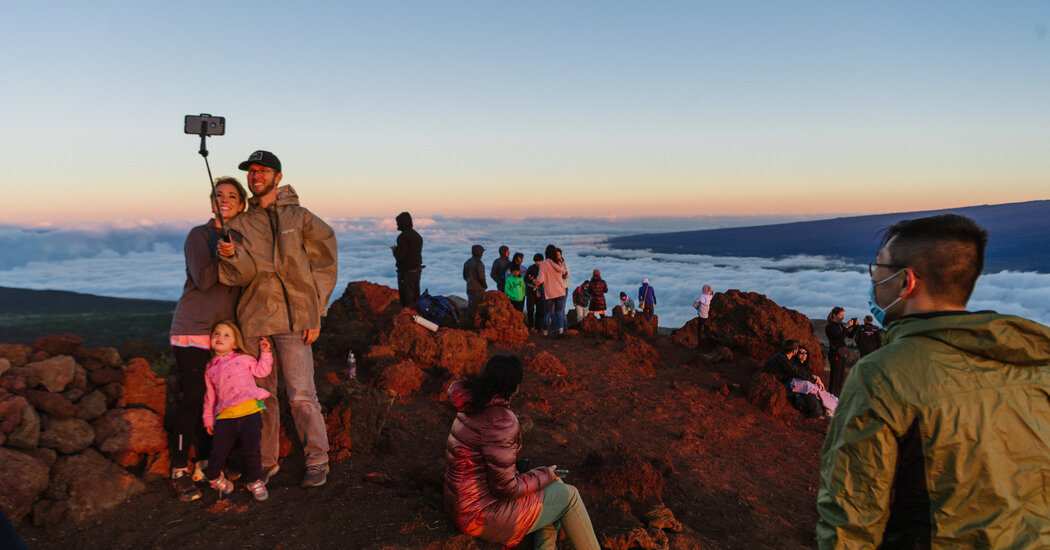 Hawaii on Tuesday became the 50th and final state to announce that it will drop its universal indoor mask mandate, as the United States attempts to move on from the once ferocious Omicron wave.

Gov. David Ige, in an abrupt reversal, said at a news briefing on Tuesday afternoon that the mandate would no longer be in effect starting on March 26.

“We have reduced Covid-19 in a way to the point where most of us will be safe without masks indoors,” he said.

Like the rest of the country, Omicron cases surged in Hawaii from December to mid-January before plummeting fast. As the surge receded, authorities on the U.S. mainland rushed to end mask mandates, leaving Hawaii and Puerto Rico as some of the last holdouts. Puerto Rico announced Monday that its mask mandate would be lifted for most places on Thursday.

Mr. Ige, a Democrat, said that Hawaii held on to its indoor mask mandate longer than any other state because “we are all willing to sacrifice to keep each other healthy and safe,” calling it “the aloha spirit.”

Masks are still required indoors at public schools in Hawaii, the last state with such a mandate, though its education department on Tuesday lifted the outdoor mask mandate on school campuses.

The end of Hawaii’s blanket mandate marked a stark pivot from a week ago, when Mr. Ige said that the state’s indoor mask mandate would remain in place even though he was lifting other restrictions. The governor had said that, on March 25, he would end the state’s strict entry requirements for travelers and the mandate that state and county employers provide their vaccination status or show negative test results at work.

However, while the indoor mask mandate is lifting, the state authorities still recommend that people wear masks if they are in a crowded setting or around immunocompromised people. Masks are also recommended at health care facilities and prisons.

The mask mandate could be reinstated if cases spike or if the Centers for Disease Control and Prevention upgrades Hawaii’s coronavirus community risk level, said Dr. Elizabeth Char, the director of the state’s health department. “What we’re worried about is, you know, the next surge related to another variant,” she added.

As of this week, four counties in Hawaii stopped enforcing pandemic rules such as those that set limits on gatherings or require proof of vaccination to enter businesses. Mr. Ige said that the state authorities felt comfortable ending the indoor mask mandate because cases have not spiked since the county policies changed.

Tim Brown, an epidemiologist and a senior fellow at the East–West Center, a research organization in Honolulu, said on Tuesday that he believes the governor lifted the mandate in part because he was under pressure from local politicians.

“I understand the political drive to do this, but I’m a little uncomfortable with the move at this point,” said Mr. Brown, adding that Omicron was still circulating in Hawaii.

Even with restrictions lifting, he believed “a good chunk” of people in Hawaii would continue to wear masks for the considerable future.

While nearly all statewide indoor mask requirements have expired, a few remain in place. The mandates in Oregon and Washington will expire on Saturday, the governors of the states said in a joint statement last month. But some U.S. territories, including Guam and the U.S. Virgin Islands, have not lifted mandates.

In recent weeks, the Centers for Disease Control and Prevention suggested that most Americans do not need to wear a mask and that schools only require masks in high-risk counties.

As of Tuesday, the coronavirus community risk in all counties in Hawaii is low, according to the C.D.C.

Dr. Sarah Kemble, a state epidemiologist at the Hawaii Department of Health, said at the news briefing that students would no longer be required to quarantine if they were exposed to someone with Covid.

“Maintaining indoor masking in schools for the time being is important for keeping our schools open,” she said.

On the U.S. mainland, school mask mandates have been or are set to be lifted or suspended in some of the country’s largest cities, including Chicago, Dallas, Houston, New York and Philadelphia. But public schools in Boston, Los Angeles, Seattle and Washington will continue to require masks at school, even though officials in most of those cities have ended universal indoor mask rules.

Some educators have pushed back against the authorities ending school mask requirements. Teachers’ unions in Seattle and Chicago have called for school officials to reinstate the mandates.