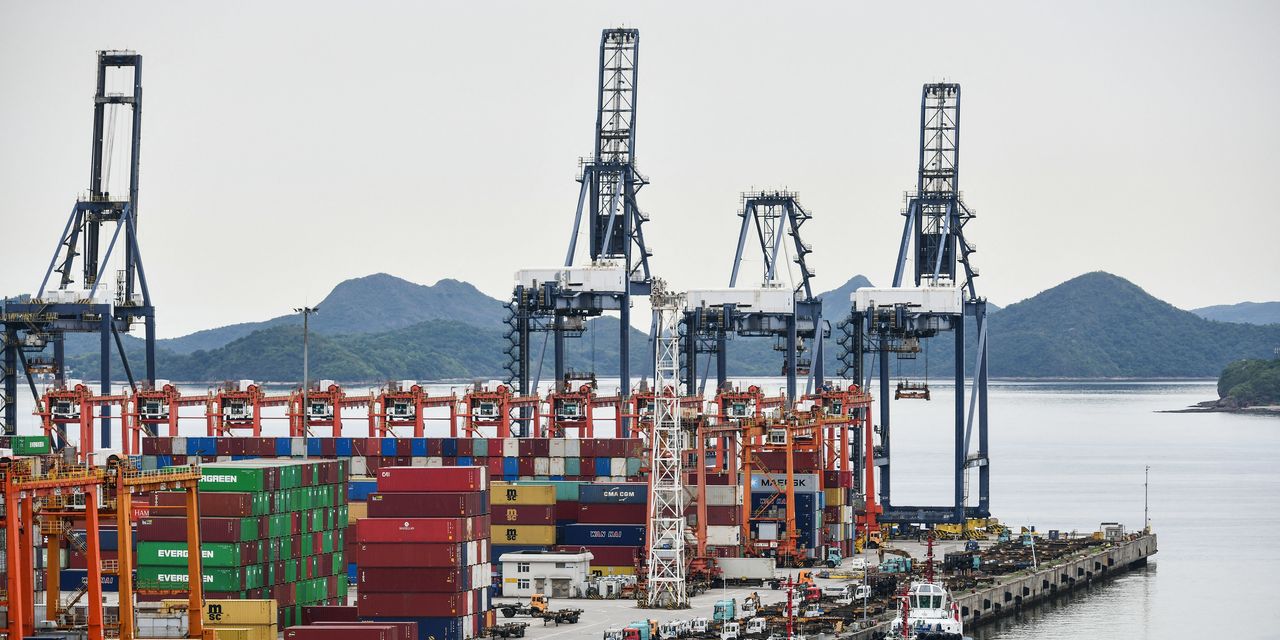 Cargo ships are accumulating at one of China’s busiest ports after another Covid-19 outbreak shut down factories and warehouses in Shenzhen, raising the prospect of a new round of bottlenecks that could push up freight rates and slow deliveries.

There are more than 35 ships waiting to dock in Shenzhen and another 30 farther north in Qingdao, according to shipping brokers. The Port of Shenzhen, which serves a major manufacturing and export hub, includes the Yantian terminal, which handles about a quarter of all U.S.-bound Chinese exports. Shenzhen remains open, but most manufacturing plants and warehouses were ordered to close this past week, and container loading is falling fast as fewer trucks are arriving.

“I’ve got a load of bicycles, but stuck 16 kilometers on the highway coming into the port for almost two days,” said Wei Wu, a truck driver moving boxes for a European container and logistics operator. “Very little moves in Shenzhen. You need to test repeatedly, and I don’t know if the ship will be allowed to come in.”

The lockdown in Shenzhen was partially lifted Friday after President

told a Politburo meeting that while sticking to its zero Covid-19 policy, the government should “minimize the impact” of the pandemic on the country’s economy.

Shenzhen’s government said Friday the city of more than 12 million resumed some factory work along with public-transportation services.

A Covid-19 outbreak closed down the Yantian terminal for almost a month in June, creating a backlog of tens of thousands of containers while dozens of ships waited for weeks outside Shenzhen to load up. Operators diverted a number of vessels to other ports, which eventually made their way back across the Pacific and created bottlenecks at the California ports of Los Angeles and Long Beach.

The Yantian outbreak cut operations at that terminal by about 75%, according to shipping brokers. Daily freight rates across the Pacific shot up by a quarter during the lockdown as cargo owners tried to find vessels that would call at other Chinese ports and move their products.

The freight forwarder Seko Worldwide said in a report this past week that there are restrictions for trucks traveling in and out of Shenzhen and that trucks from Shenzhen to Hong Kong have stopped operating, except for essential goods to Hong Kong.

It said truck restrictions also remain in Shanghai, the world’s largest port, with some ships rerouting to Ningbo.

The Danish boxship company A.P. Moller-Maersk AS said that although terminals in Shenzhen are operational, the company had come up with contingency plans and could divert ships if the Covid-19 restrictions there remain.

, a logistics operator based in Switzerland, said that in some cases it was switching drivers for trucks coming into Shenzhen to get around delays because of restrictions on intercity transportation. It said vessels are waiting an average of about 3½ days for berths at Yantian.

Freight rates this past week from China to Los Angeles held steady from the previous week at around $16,242 per container, according to the Freightos Baltic Index, but they remained near record levels and have tripled compared with the same period a year ago.

The backup outside the ports of Los Angeles and Long Beach, the nation’s two biggest gateways, was 48 vessels on Thursday, down from a record 109 in early January, according to the Marine Exchange of Southern California. Los Angeles Port Executive Director

said he expects a fresh surge of ships in the coming weeks.

Analysts said that if the ports in China stay open, the pause in manufacturing will clear some of the backlog of boxes waiting to be loaded. But with warehouses closed, finding space for incoming containers will be challenging.

Get a weekly briefing about the coronavirus pandemic and a Health newsletter when the crisis abates.

“All things considered, the impact—for now—is clearly not as large as last year,” said

chief executive of Vespucci Maritime, a Denmark-based consulting firm. “Let us hope it does not get worse than this, but China’s zero Covid tolerance and the Omicron variant is not a happy mix.”

The latest outbreaks have led major manufacturers including Foxconn Technology Group, a supplier to

China’s moves to contain the outbreaks will determine the impact on the global supply chain. About half of China’s exports are produced in areas dealing with Covid-19 outbreaks, and three-quarters of its exports are shipped from them.

On Wednesday, Taiwan-based Foxconn said it was able to restart some operations at Shenzhen campuses where workers live in dormitories alongside assembly lines. Tesla, which makes Model 3 sedans and Model Y sport-utility vehicles in Shanghai, told employees and suppliers that it would halt production for Wednesday and Thursday this past week.

has issued service alerts. Pickup and delivery were suspended in Shenzhen and Dongguan, while in Zhejiang province and elsewhere imported items would be set aside for four to seven days for sanitization, the company’s website said.

—Paul Page contributed to this article.

Write to Costas Paris at costas.paris@wsj.com