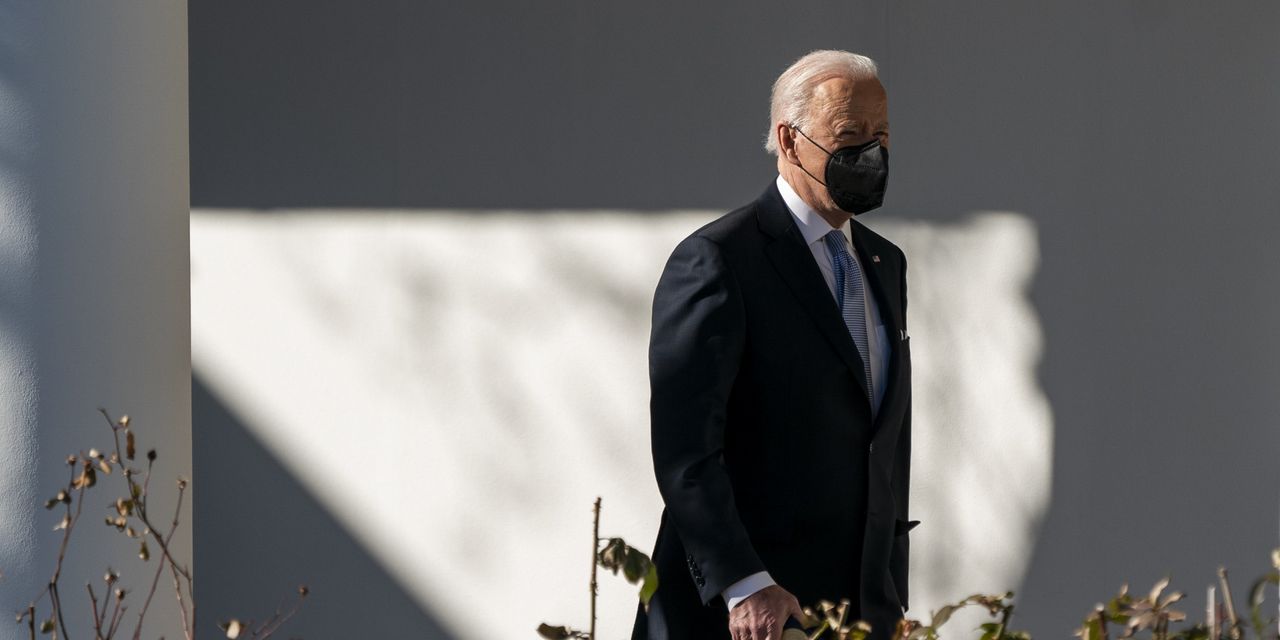 President Biden on Sunday told Ukraine’s leader the U.S. and its allies would respond rapidly to any further Russian aggression against his country, the White House said, as Russia deployed some of its most powerful weapons and best-trained battalions around Ukraine and the prospect of imminent war loomed in Europe.

told Mr. Biden that American support would allow Ukraine to prevent panic among its population, according to a statement from his office. He also asked for concrete guarantees of Ukraine’s security, saying European security is impossible without the security of Ukraine.

“We are not yet a member of NATO, therefore, only a strong Ukrainian army ensures the security of our state,” Mr. Zelensky told Mr. Biden, referring to the North Atlantic Treaty Organization.

on Sunday renewed the Biden administration’s warnings of a possibly imminent Russian invasion of Ukraine as Russia continued to insist it has no such plans and European leaders embarked on further diplomatic attempts to ward off military conflict.

“I can’t get in the head of Vladimir Putin and I can’t predict exactly what he’s going to do,” Mr. Sullivan said on CBS’s “Face the Nation.” “All we can do at President Biden’s direction is prepare—prepare for diplomacy to find a way forward that is sustainable and durable and advances the security of all the United States, Russia and Europe, and prepare for the potential of a major military action in the coming days.”

Mr. Sullivan also reiterated calls for any Americans still in Ukraine to “move out by air or rail or road as rapidly as possible.” Seeking to dispel any notion that there would be U.S. military action to extract anyone in the case of Russian action, Mr. Sullivan said there was a big difference between the U.S. deployment of thousands of soldiers to Afghanistan last summer to end a 20-year U.S. presence there and its current effort to prevent a war in Ukraine.

On Sunday one of Ukraine’s main air carriers, SkyUp Airlines, said it was forced to make an unscheduled landing in Moldova and suspended sales for flights this week after its insurers stopped covering aircraft in Ukrainian airspace because of an increased threat of a Russian military invasion. A day earlier Dutch national flag carrier KLM said it had suspended its flights to Kyiv and wouldn’t operate flights in Ukrainian airspace.

” saying the U.S. and its allies have sent a clear message to Mr. Putin that “there are very severe consequences to his aggression and that we are united in using them.”

(R., S.C.) criticized the administration’s approach in an interview with Mr. Stephanopoulos saying, “They’re telling us the invasion is imminent. But they’re not telling Putin with clarity what happens if you invade.”

“The guy took the Crimea in 2014,” Mr. Graham said. “He’s got 100,000 troops amassed on the Ukrainian border, and he’s paying no price at all. So I’d like to hit him now for the provocation and have sanctions spelled out very clearly, what happens to the ruble and his oil and gas economy. I think that’s what’s missing.”

Pentagon press secretary John Kirby, speaking on “Fox News Sunday,” said such pre-emptive measures would be counterproductive. “If you punish somebody for something that they haven’t done yet then you might as well just go ahead and do it. So we believe there’s a deterrent effect by keeping them in reserve,” he said. “Right now we are not considering a pre-emptive sanction regime.”

who has tried to balance his country’s membership in NATO with its close economic ties to Russia, is scheduled to meet Mr. Zelensky in Kyiv, Ukraine, on Monday and Mr. Putin in Moscow on Tuesday. Earlier this month Mr. Biden pushed the German leader to support tough sanctions on Russia should Moscow invade its smaller neighbor, including closing Nord Stream 2, a recently completed pipeline that is awaiting certification to start pumping natural gas from Russia to Germany. Mr. Scholz on Sunday warned Mr. Putin of “hard reactions” in the event of a Ukraine invasion but hasn’t explicitly put Nord Stream 2 in play.

who recently traveled to Moscow for talks and spoke Saturday with Mr. Putin, telling the Russian leader that sincere dialogue was incompatible with an escalation, according to Mr. Macron’s office.

Talks could continue throughout the next week if events don’t overtake them. On Monday, the Organization for Security and Cooperation in Europe will meet to discuss Russian-Belarus military exercises after the Belarus government refused to provide details of the planned training. Russia has also ignored a Ukrainian request for information about separate Russian exercises, Ukraine’s foreign minister said this weekend. The OSCE is the one European security mechanism which counts Russia, Ukraine, the U.S. and Europe as members.

At the end of the week, the annual Munich Security Conference will bring together many Western officials and leaders. Mr. Zelensky is among those due to speak.

National Airlines, a closely held U.S. cargo and passenger charter carrier, said Sunday it had flown its last planned flight for the U.S. military into Ukraine. Orlando-based National, which flew refugees from Afghanistan last year, operated a Boeing 747 from Kyiv to Naval Station Norfolk in Virginia on Sunday, according to tracking service Flightradar24.

“At this point we have no plans to operate any future U.S. military flights into Ukraine due to the developing situation,” said a spokeswoman for National.

The threat of a Russian invasion of Ukraine is shaking up a fragile global oil market, with a tight balance between supply and demand. Russia is the world’s third-largest oil producer, and a conflict in Ukraine leading to a substantial decrease in the flow of Russian oil could drive prices higher.

About 60% of Russia’s oil exports go to Europe, according to investment bank Cowen, and another 30% go to China. Russia accounts for about 25% of global trade in natural gas, and 85% of its gas goes to Europe.

Meanwhile Poland’s government is preparing for the possibility that a large number of Ukrainian refugees would cross its border in the event of a war, Interior Minister

said Sunday. Officials in the province of metropolitan Warsaw, the capital, were looking at hotels, hostels, schools, churches and other public and commercial buildings that could house a sudden influx.

Just months ago, Poland began building a wall along its eastern border with Belarus to keep mostly Middle Eastern asylum seekers from entering Polish territory. In contrast, Poland’s conservative government has long voiced its willingness to keep taking in large numbers of Ukrainians, whose language is close to Polish. For years, Poland has been a top destination for Ukrainian emigrants and refugees.

Write to Alex Leary at alex.leary@wsj.com and Laurence Norman at laurence.norman@wsj.com