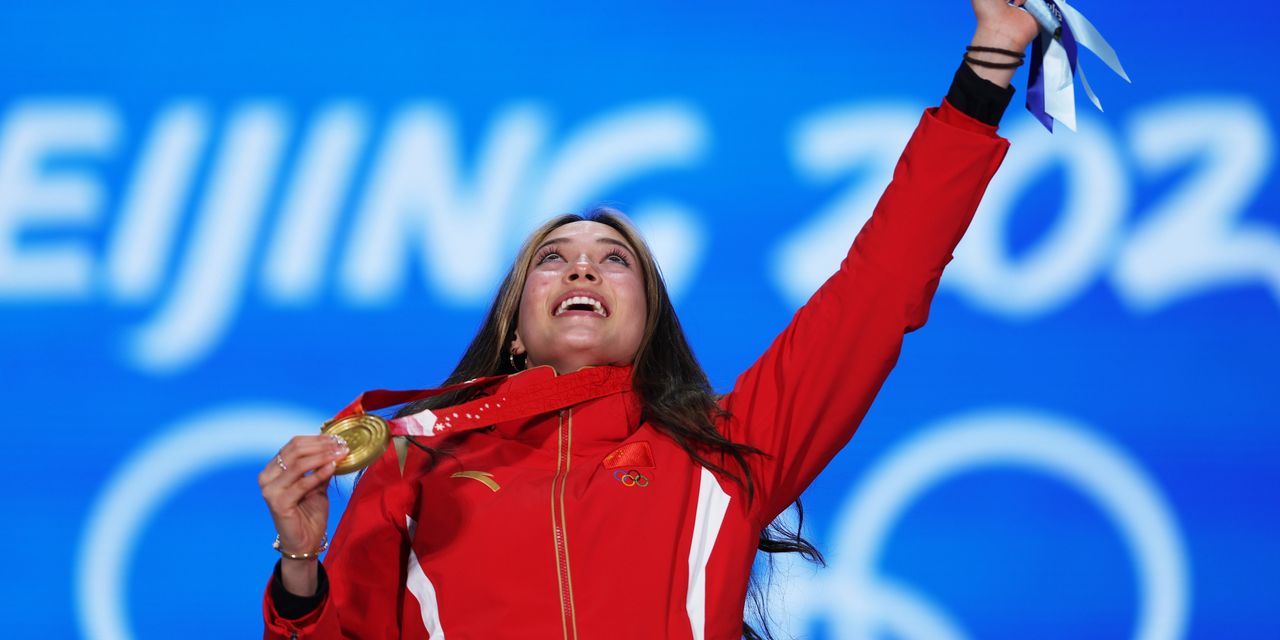 BEIJING—The U.S. and China’s geopolitical rivalry has at times threatened to boil over and scorch the Winter Olympics. Now, Beijing appears to be trying to dial down the heat.

After days of heated online discourse, China is scrubbing some of those comments and cordoning off others from further discussion, in what appears to be a bid to rein in nationalist sentiment and present a happier, more hospitable face as the Olympic host.

Ms. Zhu, who relinquished her U.S. citizenship to compete for China, was initially ridiculed and blamed after tumbling twice and finishing last during a team event on Sunday. Online commenters questioned the motivations of Ms. Zhu, also known by her Chinese name Zhu Yi, and her legitimacy in representing China.

A hashtag on China’s

Instead, the vitriol on Chinese social media against Ms. Zhu, a 19-year-old born in Westwood, Calif., has given way to overwhelmingly positive comments and notes of encouragement. Some ascribed the earlier negativity targeting Ms. Zhu to U.S. media outlets, who they said had played up the cyberbullying of the skater.

“What everyone said on the internet rather affected me,” Ms. Zhu said, as quoted by China’s state-run Xinhua News Agency on Monday. “The problem now is psychological. I will try not to be affected by the outside world.”

On Thursday, an administrative account of Weibo said the platform has so far deleted more than 66,000 posts and suspended 3,700 accounts found to have attacked athletes.

Ms. Gu, who has become a magnet for nationalist controversy in the U.S. in recent days for having switched to represent China, chimed in. “Mistakes and pressure are all part of sports,” she told reporters after her own gold-medal performance on Tuesday, adding that she had watched Ms. Zhu at practice and admired her.

Though China’s internet is, in general, tightly manicured by authorities, it can also be a boisterous place where allegiances to country and to individual stars are fiercely defended.

On Thursday, that manifested itself in an explosion of empathy and enthusiasm for Yuzuru Hanyu, Japan’s two-time gold medal figure skater and a favorite in China’s online world—and in ridicule aimed at Nathan Chen, Mr. Hanyu’s longtime Chinese-American rival, who won the gold.

It is unclear why China’s internet authorities intervened in Ms. Zhu’s case. But her personal back story has offered plenty of points of contention for China’s internet users to fight over.

Some commenters on China’s internet suggested, for instance, that some kind of nepotism may have been at work in Ms. Zhu’s selection, noting that her father, a leading artificial intelligence expert named Zhu Songchun, had decamped to Beijing’s elite Peking University in 2020 from the University of California, Los Angeles.

While Ms. Zhu, unlike Ms. Gu, has been clear about having renounced her American citizenship to join Team China, some on China’s internet have accused Ms. Zhu of having taken her Olympic slot from Chen Hongyi, a China-born figure skater.

After Ms. Zhu missed two jumps during the women’s short program team event, some social-media users in China called her a disgrace and told her to “go back to America.”

“Before I even started, I guess I just put a lot of pressure because I know everybody in China was pretty surprised with the selection for ladies, and I just really wanted to show them what I was able to do. But unfortunately I didn’t,” a tearful Ms. Zhu told reporters afterward.

After many hours of relentless criticism, however, the authorities’ stance appears to have shifted, and with it public opinion. Now, more voices can be seen pointing out, for instance, that China seems to have courted Ms. Zhu before persuading her father to relocate to Beijing. Others reflected on the hate on display.

Hu Xijin, the former editor in chief of Global Times, among China’s loudest nationalist voices online, condemned the attacks on Ms. Zhu. “Venting emotions on this young athlete personally and using social media to hit someone when she’s down because she made mistakes, that’s cyberbullying, and in any case it’s gone too far,” Mr. Hu wrote on Weibo on Sunday evening.

By Monday, Ms. Gu happily reported: “As someone who actually uses Chinese social platforms, I’m going to say right here that over 90% of comments are positive and uplifting.”

Get daily news and analysis on the Beijing Olympics and the Super Bowl.

Xiao Qiang, a research scientist at the University of California, Berkeley’s School of Information who studies China’s internet and censorship, suspects that authorities came to believe that the attacks on Ms. Zhu, which have grown out of the idea that the U.S. and China are inveterate foes, had gotten out of hand.

“Lots of those opinions were not organized by the government, but they were a product of this longtime government propaganda,” Mr. Xiao said, referring to what he described as a tendency toward more heightened Chinese nationalism in recent years.

“An important factor is likely that nationalist anger does not fit the inclusive spirit of the Games, and that it threatens to portray the host of the Games in a poor light,” said Florian Schneider, director of the Leiden Asia Centre in the Netherlands.

While Mr. Schneider doesn’t see straightforward reasons for the state to intervene in the online debates around Ms. Zhu, “criticism of Ms. Zhu touches on so many hot-button issues in China that it risks spiraling into wider discussions about systemic inequalities in China,” he said.

Mr. Schneider said the strong reactions to Ms. Zhu’s falls earlier couldn’t be reduced to nationalist sentiment alone. Instead, they seem to reflect wider anxieties about economic opportunity in China.

“It matters very little whether such allegations are justified,” he said. “For many, they evoke a lived experience in which upbringing, family background, and personal connections create unfair opportunities in a cutthroat economy.”

What to Know About the Beijing Winter Olympics

Write to Elaine Yu at elaine.yu@wsj.com