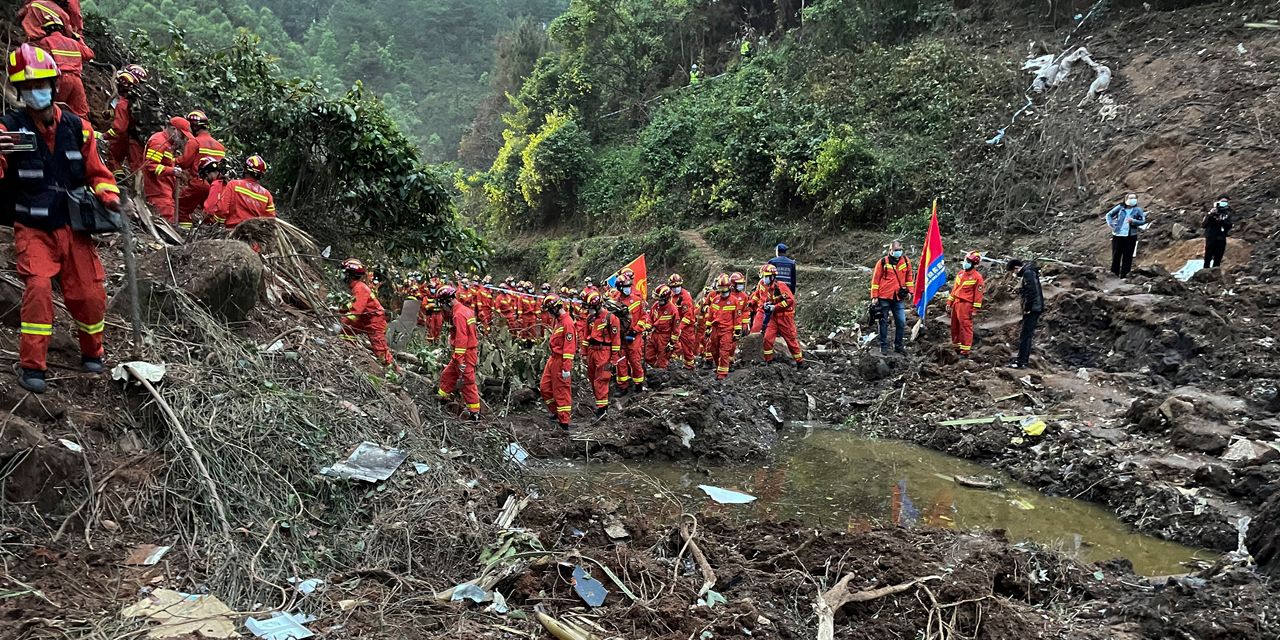 HONG KONG—Rescuers have recovered one of the black boxes from the Boeing 737 that crashed into a mountainous rural area of southern China, the country’s air-safety regulator said Wednesday.

The discovery of what officials said they believe is the cockpit voice recorder may provide vital evidence for investigators probing why the plane, operated by

and carrying 132 people, plunged to the ground on Monday. All on board are feared dead in what would be China’s worst airplane disaster since 1994.

Heavy rain hampered the efforts of rescuers who, armed with shovels and flashlights, combed the crash site, finding fragments of human remains, according to one fire-department official. Footage from China’s official Xinhua News Agency showed officials on a muddy, forested hillside placing the black box—actually an orange, cylinder-shaped device—into a plastic bag with their gloved hands.

The black box’s exterior was severely damaged but its storage unit remained “relatively intact,” Zhu Tao, a spokesman for the Civil Aviation Administration of China, said late Wednesday. An early assessment showed it was a cockpit voice recorder, and the device has been sent to a facility in Beijing for analysis, Mr. Zhu said.

A plane’s two black boxes—a flight-data recorder and cockpit voice recorder—store vital information and typically provide accident investigations the best information about what caused a plane to go down. The devices are hardened to withstand significant impact and their data can often be useful to investigators even if the boxes are damaged.

It takes time to download and decode the recorded data, but the process can take longer if its internal units are impaired, Mr. Zhu said. The hunt for the second black box is continuing, he said. Both devices are made by

an aerospace and industrial conglomerate based in Charlotte, N.C., according to Chinese officials.

At an earlier briefing, Mao Yanfeng, a CAAC official, said the weather wasn’t dangerous at the time of the crash, and that air-traffic controllers and aircrew members had maintained normal communication up until the sudden drop in the jet’s altitude.

Tracking data from Flightradar24 shows that the jet plummeted from the sky, reaching vertical speeds of 31,000 feet a minute, or more than 350 miles an hour. It initially fell to an altitude of 7,425 feet when it briefly managed to gain about 1,200 feet in altitude before again diving toward the mountain—a trajectory some air-safety experts said was very unusual.

The plane was operated by a captain and two co-pilots who were qualified and had performed well, Sun Shiying, chairman of China Eastern’s subsidiary branch based in southwestern China’s Yunnan province, said Wednesday. The chief pilot was hired as a Boeing 737 captain in January 2018, with flight experiences totaling 6,709 hours, Mr. Sun said, while the co-pilots respectively had 31,769 and 556 hours under their belts. They weren’t named.

The wreckage of the plane was strewn across a hilly, forested area. An army of rescuers—including soldiers and firefighters—and excavators dug into the land where the crash’s impact wiped out trees and a terraced field, video from state broadcaster China Central Television showed.

The rain soaked the crash site, forcing rescuers to suspend their effort, CCTV reported, adding that the smell of fuel still lingered at the scene. The broadcaster said rescuers warned the rain could cause small-scale landslides.

The plane was carrying nine crew members and 123 passengers. With no survivors found, it could be China’s worst plane crash in almost three decades.

Ou Ling, a fire department official in Wuzhou, a city in the Guangxi region near the crash site, told CCTV on Tuesday that human remains have been found. Details about any recovery of bodies remained scarce in Chinese media.

Mr. Ou said the narrow paths to the crash site have prevented larger rescue equipment from entering, adding that the lack of lighting facilities in the mountains—especially at night—has complicated their mission, according to state media.

The plane, a Boeing 737-800, was suitable for flying and reported no technical issues before takeoff and its aircrew were in good health and met flying requirements, Chinese officials said Tuesday.

Boeing has said it was working with the airline and its experts are prepared to assist with the investigation.

—Rachel Liang and Qianwei Zhang contributed to this article.

Write to Elaine Yu at elaine.yu@wsj.com