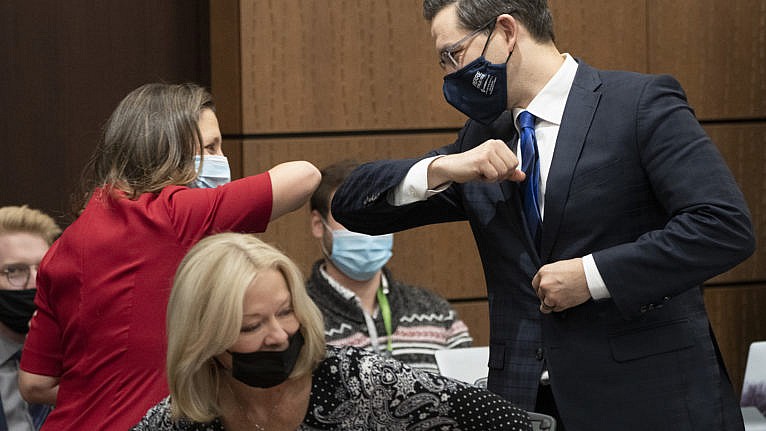 Philippe J. Fournier: He may be on his way to a coronation, but Pierre Poilievre as CPC leader would not have an immediate dramatic effect on the federal numbers

The Conservative Party of Canada is (once again) entering a leadership race after Erin O’Toole was precipitously expelled by his own caucus last week. The favourite candidate at the starting line of this race is Carleton MP Pierre Poilievre. According to the latest Leger poll released on Tuesday, Poilievre is by far the preferred candidate among Conservative voters: 26 per cent of respondents say Poilievre would be the best choice to lead the CPC, ahead of Ontario Premier Doug Ford (10 per cent) and former Conservative minister Rona Ambrose (6 per cent). Ambrose has already indicated that she will not be in the race. Doug Ford has also said that he is focused on his own re-election at Queen’s Park (the Ontario general election is scheduled for June 2), and not on the federal Conservative race.

However, an important caveat to these numbers is that the poll respondents are CPC voters, not CPC members—who will actually get to vote in this race. It should be stressed that CPC voters are a subsample of the Canadian population, and CPC members, who tend to be further to the right on the political spectrum, are a subsample of that subsample, so this data does not tell the whole story.

Will Poilievre be able to move the needle in his party’s favour? The Léger poll (conducted for The Canadian Press) offers some preliminary numbers.

Voting intentions at the federal level seem to be frozen in the country since the September election (see the complete list of federal polls here). The only trends so far compared to last fall’s results are modest: a small drop of support for the CPC, and a rise for the NDP of similar amplitude. Here are the latest federal numbers from Leger, taken as generic ballot (without the party leaders named):

The Liberal Party of Canada remains in the lead with 34 per cent support across the country, virtually identical to the numbers measured by Leger in January. The CPC stands at 29 per cent, close to the 338Canada‘s current Conservative average. Jagmeet Singh’s NDP stands at 21 per cent, consistent with trends in recent years whereby the NDP gains support between election cycles before losing ground as an election draws near.

The survey then asked respondents for voting intentions naming the federal leaders, and with Pierre Poilievre as CPC leader. Here are the results:

The LPC slips to 31 per cent (-2 points), the NDP climbs three points to 24 per cent. And the Conservatives? They remain stable at 29 per cent. We also note that support for Maxime Bernier’s PPC remains unchanged at 4 per cent.

What can we conclude from this new preliminary data? First, that the nomination of Poilievre as CPC leader—still a hypothetical—would not have an immediate dramatic effect on the federal numbers. Not only are the voting intentions with and without Poilievre virtually identical, but even the regional and demographic sub-samples do not show significant movement.

For example, here is the comparison of the numbers without and with Poilievre as leader of the CPC in Quebec:

With Poilievre as leader of the CPC, the Bloc and the CPC lose two points each in Quebec, while the NDP and the PPC gain two points. The LPC remains stable at 32 per cent. None of these variations is statistically significant, given the size of the subsample.

Here are the numbers in Ontario:

Once again, we see little movement between the two sets of numbers. With Poilievre as leader of the CPC, the NDP rises two points and the PPC falls two points. Support for the other parties changes by only one point. So, once again, we see no significant movement.

Of course, the race to succeed Erin O’Toole is not yet officially underway, and there may be a lot of water under the bridge by the end of the summer (when we assume the vote will take place). But let us remember that Maxime Bernier and Peter MacKay were both front-runners in the 2017 and 2020 CPC leadership races, respectively. Both men won the most votes from members in the first round of voting before eventually losing the leadership race.

Nevertheless, in the last two Conservative races, we should note that the eventual winner was the one able to pull ahead with the support of the reform and social conservative wing of the party. Is there enough oxygen for a candidate from the progressive wing to compete and win? It appears highly unlikely at this point in time. Not only has Poilievre already been endorsed by a dozen members of his caucus, but his attack on elites, media, and the establishment of late could certainly appeal to the growing populist wing within the CPC. Rumours that the likes of Jean Charest and Tasha Kheiriddin may be tempted to run could provide the moderate wing with interesting candidates to vote for and, hypothetically, help expand the party’s base. But will CPC members really be interested in (another) moderate candidate?

Many have openly criticized O’Toole for moving to the centre during the general election after running a True Blue campaign for the leadership. Will CPC members want to double down on this strategy, which resulted in defeat in 2021? The answer appears self-evident.

Nevertheless, while Poilievre may be on his way to a coronation as CPC leader, the preliminary data shows that his potential for growth among the general electorate appears limited. Obviously, these numbers could evolve in the next few months, and we at 338Canada HQ will be following the data closely.